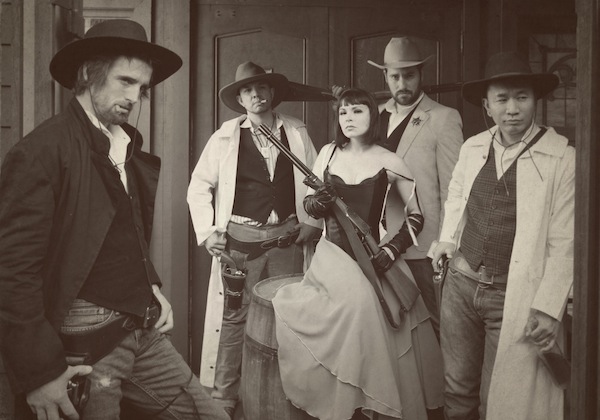 Until last Thursday, I was a Café Nordo virgin. In this case, use of the word virgin is quite intentional; Nordo’s dinner/cocktail theatre has reached that level of Seattle experience, like 14/48 or Smash Putt at which “first-timer” no longer suffices. The experience is as transformative as sex or war—one enters a virgin and exits a veteran.

The setting of SMOKED! is a saloon in a sleepy small town that was once called Dead Creek but everyone now refers to as Sauget, after Mister Sauget—an agricultural bigwig who’s taken over the place. Sauget is actually a real town in Illinois—and while its current name probably doesn’t ring a bell, its original name will: Sauget was once Monsanto, a town founded to provide low taxe rates for the Monsanto Chemical plants.

Like 1980s Monsanto, Nordo’s Sauget has been bankrupting the town’s small farmers, destroying their crops with chemical products and forcing them off of their land. As saloon guests, the audience has come to Sauget on the eve of a hanging—the execution of a small farmer and “eco-terrorist” who burned his own field in an act of protest. The real action begins when a mysterious stranger in black (Ray Tagavilla) rolls into town to stir up some tumbleweeds.

For this show, Nordo has set up shop at The Kitchen by Delicatus, an intimate space with brick walls and a high ceilings, rustic without being warm or cozy. Stairs climb to a loft where the band sits behind a wooden railing offering twangy chord accentuation, boingy sound effects, and music fit for the range.

With backlit swinging door entrances and an abundance of squinty stink-eyes, SMOKED! pokes fun at Westerns—and it’s at its most coy when a challenge to a high-noon showdown gets refused on account of a hair appointment. True to small-town desert life, the action starts off slowly while the audience munches on alfalfa hay-smoked popcorn. At first it’s somewhat difficult to settle into the theatricality of the experience; in such an intimate space, immediate melodrama can be off-putting, its lines sounding tinny and artificial.

But the second act, though, I slipped wholeheartedly into the role of boozy slack-jawed bystander, helped by the second of Nordo’s cocktails—a fresh woodsy mix of Dolin Blanc and locally distilled Voyager gin and douglas fir liqueur. Chef Nordo Lefesczki along with writers Erin Brindley and Terry Podgorski are potions masters, mixing the right dose of alcohol and theatrical tension to put you in a state of suspended anticipation for whatever comes first—the next entrance or the next entrée.

As the sweet but tough bar owner, Opal Peachey is a calm foil for the marvelously deranged Kate Hess, one of Mr. Sauget’s henchmen. She and fellow Sauget lackey, the slimy western dandy Ryan Higgins, share a master-pet relationship that recalls Voldemort and Bellatrix Lestrange. Hess’ top-toothed sneer curls alternately into silkily sinister coo-cooing and violent screaming bouts that are soothed by Higgins with stern words and gentle pats on the head.

Hess’ lunacy is echoed by her wardrobe styling—half-braided, half-teased hair with a streak of blue chalk, smeared blue eye shadow and a sparkly silver tunic peeking out from a military style jacket. Costume designer K.D. Schill does an interesting job mixing modern clothing pieces to imitate old western style for an overall look that is more thematic than period.

Tension mounts in SMOKED! like darkness spreading across a plain. By the time the sun sets, comfort arrives in a bowl of chili and a stiff bourbon drink. The vegetarian chili is hearty and spicy with chunks of celery and carrot, but most tantalizing is the square of fried corn pudding—a unique, crunchy tidbit with a melty interior.

After guns and final breaths are drawn the evening’s experience continues to linger like the sweet tang of rhubarb pandowdy, even if the show itself clears away like barrel-smoke. Like so many first-time experiences, the morning after I woke up both suspecting that they’d had better and eager to try again.

SMOKED! runs through June 16 has been extended through June 23 at The Kitchen by Delicatus. Photo by John Cornicello.