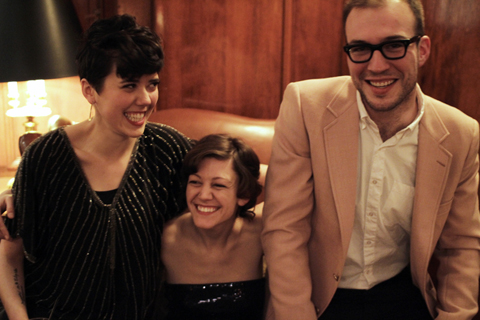 It’s a Monday night and you’ve walked into the Sorrento Hotel’s Fireside Room (or if you didn’t, you wish you had). It always feels like wandering into a Victorian humidor there, one that smells lightly of liqueurs and hardwood. The seating is all overstuffed, upholstered in damask or burnout velvet. Naturally this is the appropriate setting for a competitive storytelling event featuring a poet, a playwright and a drag queen, who are each gearing up to perform readings in front of the room’s namesake hearth.

This is an event put on by APRIL (Authors, Publishers and Readers of Independent Literature), Seattle’s newest independent literary festival. The fest has already thrown numerous readings, dance parties, workshops and this is merely midway into ten days of intensive, delightfully unconventional programming.

Tara Atkinson, one of the brains behind APRIL, introduces the competitors who have been seated in high-backed chairs in front of the fireplace by announcing that the night’s program promises to be “pan-fried, pan-genre, possibly pan-sexual”. The tinkling of cucumber gimlets in martini glasses can be heard across the room. It feels slightly decadent, a little Gatsby-on-the-Sound. It has been determined ahead of time that the competitors write stories in response to the topic “independence”. Go.

They draw names from a hat and the drag queen reads first. She’s Jackie Hell, a local celebrity who looks kind of like a super messed up Judy Garland if she wandered into a Fellini dream sequence, with pounds of eyeliner, rouge-slathered cheeks and mismatched knee-high hosiery. She reads a black tale about what it takes to win a Kenmore refrigerator at a dance competition of questionable repute. Next up Debra Di Blasi, founder of Jaded Ibis Press, whispers into a mic about phantom limbs under the Viaduct. Mallery Avidon finishes with a theatrical piece about loving/hating Mike Daisey. She takes the grand prize of a hundred bucks and a Flavor Flav-proportioned medallion made from a decorative brass plate and an oversize chain sourced from a nearby thrift store.

APRIL founders Willie Fitzgerald and Tara Atkinson are both relative newcomers to Seattle, inspired by the city’s thriving independent lit scene and motivated to introduce new audeinces to it. They’ve been working together to organize the festival since last February, shortly after they met at a reading group hosted by the now-shuttered Pilot Books. In fact, all of APRIL’s founders (which also includes Kellen Braddock) met through Pilot Books, which, during its run, could arguably have been compared to a Seattlesque version of Shakespeare & Company, a brick and mortar shop around which a passionate community took root and thrived. Fitzgerald and Atkinson want to nurture the energy of the community that sprouted from Pilot and keep the momentum going.

APRIL is doing that. And they’ve been bowled over by the success of the festival, by the diversity of the crowds showing up, which is exactly what they hoped to accomplish through the unorthodox spaces they’re booking for the festival’s events. “Independent literature survives by the passion of readers and people who buy it,” says Fitzgerald. “We want to cater to and encourage the reading and writing public that already exists, but also bring in people who don’t normally go out to these things. We believe everyone is a reader and we want to connect readers with writing, expose them to new stuff, make converts to independent literature.”

The festival continues through the end of the week, including a multimedia reading and music performance at Hedreen Gallery tonight, a Seattle LitCrawl Friday, and a closing bash at Vermillion Art Gallery on Saturday. Friday night’s pub crawl, featuring local lit luminaries like Doug Nufer, Kate Lebo, and Sarah Galvin, promises to be unforgettable. Atkinson explains that she’ll be reading a short story about a Whopper (that’s right, the sandwich) over a child’s karaoke machine while Fitzgerald carries her from Piecora to Arabica. These kinds of things happen but once a lifetime.