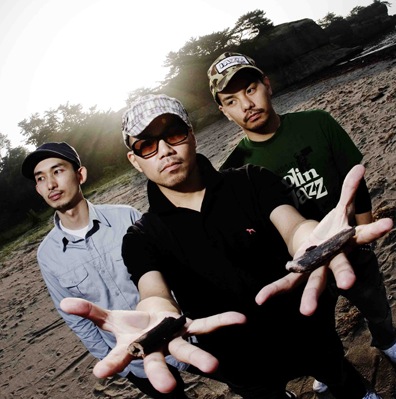 Nine things to love about Japanese hip-hop crew GAGLE and their video for “Rap Wonder DX”:

1. GAGLE (pronounced “Gaggle”) are a trio of devout hip-hop heads from Sendai in northern Japan whose names are DJ Mitsu The Beats, MC Hunger, and DJ Mu-R. These are all great names.

2. DJ Mitsu The Beats has been widely hailed as the Japanese incarnation of Pete Rock, DJ Premier, and J Dilla. This is very high praise.

3. DJ Mitsu The Beats possesses a wizard’s gift of sourcing and sampling rare soulful piano hooks to use in his productions. This song is a particularly good example of this.

4. The video appears to be shot entirely on what looks like a newly-built, LEED-certified, suburban university campus. This is probably a world-first for a rap video.

5. Playing countless hours of Nintendo and 3D role-playing games on other legitimate gaming platforms clearly influenced their decision to have their names, directional movements, and current emotional states depicted as giant brick-like words and symbols floating a foot above their heads at all times. This is very entertaining.

6. The expression “Saikou!” (which is repeatedly said throughout the song but first heard at 1 minute 14 seconds and is pronounced exactly the same way as you would say “psycho”) is an approximate translation of “Awesome!” or “Best!” This is a very satisfying word.

7. The chorus outro (or whatever you call it) goes “Wonderful! Wonderful! Quack! Quack!” complete with GAGLE making hand gestures in front of their mouths resembling a duck’s bill quickly opening and closing to the beat. Later on we see “Wonderhoo!” bricks spinning above their heads. This is brilliant. (It cannot be emphasized enough how brilliant this is.)

8. MC Hunger isn’t concerned with keeping his flow in strict time to the kicks and snares that provide the rhythmic structure of the song. Instead his sportive syllables duck and weave their way in, out, and around every bar, like multiple grappling hooks thrown up on a jungle gym, allowing him to climb, sway, and rappel off every boom-bap as he pleases. This makes the track even better.

9. With it’s watery jazz piano riff, mischievous lyricism, crew shouts, and serious amounts of fun from start to finish, “Rap Wonder DX” could easily be a lost B-side from Bizarre Ride II The Pharcyde. It’s that good. This is a very good reason to listen to this song again.

Check out GAGLE’s official site (and peep a picture of them half-heartedly threatening you with lollipops) here.