Special to Ampersand: a personal essay that remembers the early days of Starbucks and Howard Schultz, before rechargeable gift cards and the death of the Sonics. By Anonymous.

I was one of the first baristas at a great little company called Starbucks. Call me Australopithecus barista, the missing link between Folgers’ Mrs. Olson and the countless thousands steaming up a Starbucks near you. It was a local company with about four stores and under a hundred employees, about ten of us making espresso. We were zealots. Our bare-breasted, split-tailed mermaid logo (now censored) was an emblem of romance, adventure, magic and mystery – something sexy, decadent, slightly sinful. We had great coffee. Better than the swill they sell there now.

For its first ten years, Starbucks did not sell coffee by the cup. No Grande. No mocha. No latte. No, sir! Starbucks sold only coffee beans. Our founders were averse to the idea of serving coffee. We were enlightened educators, evangelists, empowering people to make this magic brew at home. I felt like Johnny Coffeebean, preaching the gospel.

It wasn’t just a business. It was a belief system, an aesthetic. My favorite moment: convincing cofounder Gordon Bowker to commission Seattle artist Carl Smool to fabricate giant dancing coffee bean costumes for a Market Foundation fund-drive TV ad. Starbucks didn’t do TV ads back then, but it participated generously in the local community. In a sense, Starbucks itself was a work of art.

As a newly minted barista at the experimental “espresso bar” at the flagship Pike Place store in 1984, I put on an apron and worked that machine like a steam-powered locomotive. Then I quit to be an artist. Some of those who stayed earned fortunes in stock options. Our little company steamrollered the nation and mutated into a giant multinational with a zombie army of quickly hired, under-trained, vacant-eyed employees, one of whom recently confessed to me, “I don’t drink coffee.” Infidel! Unthinkable in my day.

Starbucks grew from an icon of uncompromising purity into a tarnished brand, competing for customers with McDonald’s and Dunkin’ Donuts, serving frothy dessert beverages and mediocre coffee. It’s become a “purveyor of flavored milk,” as a fellow early zealot puts it. Also a purveyor of thoughtfully curated music: Paul McCartney dumped the Beatles’ record label to put out Memory Almost Full on Starbucks’ label. But then sales cratered, for coffee and tunes. Carly Simon’s Starbucks album tanked last year. When she went to New York’s big Starbucks to sign albums, they didn’t have any. She sued for five to ten million dollars. (Starbucks said they did all “agreed-upon marketing.” Other retailers couldn’t sell her CD either.) 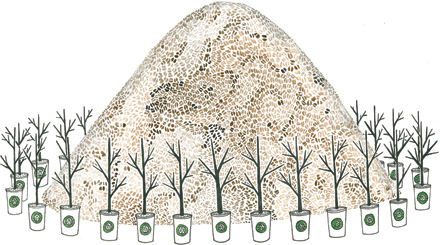 Yet now Starbucks appears to be bouncing back. The company is trying to return to its creative cultural roots.

How did the transformation of our humble little bean store happen? Howard happened. The day Howard Schultz walked into our store as the bold new marketing director, the first thing we noticed was his shoes. Italian-made oxblood wingtips, or something. Shiny, alien-looking. He was the most East Coast creature we’d ever seen. And the suits! Luxurious, elegant. He was boyish, earnest and confident. From a distance, he looked like a human skyscraper. He had the tall person’s habit of lowering his head, adapting to the person he’s talking to, keeping steady eye contact.

It was a cultural collision. We wore open-toed Birkenstocks and faded jeans. Half the time, we were pleasantly stoned. He saw us as guarded, arrogant, slightly jaded. He was right. A cozy, familial group, we were guarded, wary of Howard’s intentions and of his executive past at Xerox.

The founders were impressed by Howard, but I think they were scared of him. His ambition was too sharply commercial for our Northwest sensibility. Eventually, they softened and let him set up a limited test of his vision: Starbucks as the nation’s hawker of coffee and high-end coffeemakers. Saying no to Howard Schultz, we all discovered, is not easy. The guy can wear you down. He’s got voodoo power.

And up close, it was impossible not to be disarmed by his sincerity. He’s as soulful as anyone I’ve ever met. He can make you fall in love with what he’s in love with (even if you were in love with it already). His combination of heart, ego and sheer willpower explains a lot about the company’s complicated character.

We changed him. We taught Howard to drink coffee, a local art honed at places like the Allegro and the Last Exit on Brooklyn. He quit a great job selling us coffee paraphernalia to join us. And he changed us.

Oh, God, the training. We already knew way too much about coffee, but he made us learn more and also learn to be marketers. Howard instituted mandatory weekly product meetings at night, after the store closed. We were prodded into shedding our casual regionalism and passive hipness, hammered and molded into a professional sales staff.

His place wasn’t secure yet, and he wanted to prove himself.

Sometimes Howard was in the store selling appliances himself, and occasionally he made us cringe as he overwhelmed customers. One of my colleagues said an elderly woman once waited a day to return an expensive coffeemaker she didn’t want, to avoid seeing Howard. She couldn’t find it in herself to say no to him.

Using special spoons, we sipped and spit, sipped and spit, then rehearsed our poetic patter, thoughtful discourses on the intangible nuances of roasts and regions. We were experts on coffee culture from plantation to cup. If you had any question about our product, our passion – was this brew earthy, grassy, nutty, bright, bold, fruity or fragrant? – we had the answer. We could tell you anything you could possibly want to know, and more.

Howard got us all fired up. The more daring among us believed we might someday build dozens of Starbucks stores. All over Seattle. And after that, maybe Portland! But others thought it was just our typical fourteen-mugs-of-coffee-per-shift talking.

Thanks to Howard, Starbucks grew so remorselessly, more like spores than stores, that it inspired a headline in the Onion: “New Starbucks Opens in Rest Room of Existing Starbucks.” It was a joke, but just barely.

Some of us thought it was the coffee that was becoming a joke. This perception must have played a part in the 69 percent decline in income Starbucks reported a year ago. Howard, who had meanwhile moved on, jumped in to right the ship. He trimmed growth, ordered layoffs and apparently saved the day: last quarter’s revenues almost quadrupled.

And he seems to be accomplishing this at least partly by doing what he learned from us earthy hipsters who loathed corporate culture and prized originality. New Starbucks stores are emerging that don’t look like soulless clones of Starbucks stores. On Capitol Hill, Roy Street Coffee & Tea is an “inspired-by-Starbucks coffeehouse” with furniture made from “wind-fallen trees” or recycled from vintage antique stores. I might go there and find myself sitting in a chair I used to sit in with my fellow barista pioneers. It’s billed as “another street-level coffee and tea experience,” with “a deep connection to the local community.”

It’s easy to misread figures like Howard. He’s the Man, a corporate player, a suit. But if Starbucks hopes to become relevant again, it will be by tapping into what we taught him when he first landed here. I think he can do it. •

Ampersand showcases locally made art that translates well into two dimensions. Send your previously unpublished prose, poetry and art submissions to the editor at ampersand@cityartsmagazine.com.