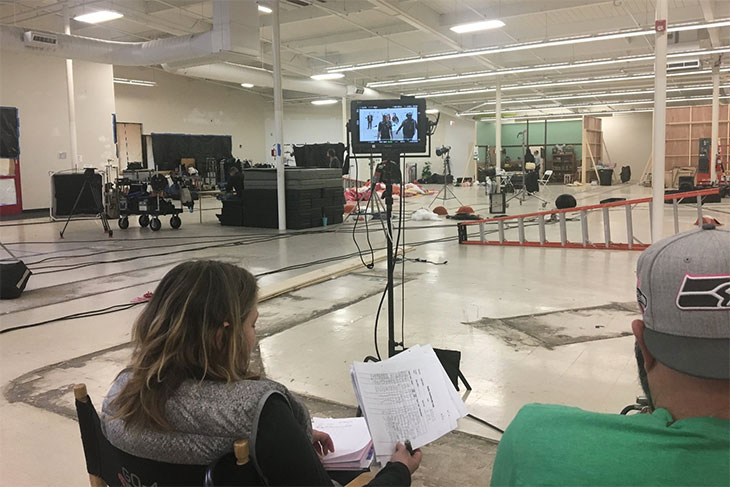 At the far end of a busy Burien strip mall, an alternate future for Seattle filmmaking grows in the site of a former Staples. A sheet of paper taped to a window announces the current tenants: Zoo Break Productions, a fully functional 24,000-square-foot soundstage facility, a crucial resource for filmmakers and the only one of its scale in the area.

Stripped of the displays and merchandise of its former retail tenant, the building is a vast shell with high ceilings. A dusty gumball machine sits near the entrance. Scars on the linoleum floor reveal an exposed concrete grid where aisles once stood. The interior is an institutional off-white save for a pair of expanses painted in bright green and blue on the rear wall, to be used for greenscreen shoots. There’s a pair of offices down one hallway, and in the back are restrooms, a loading dock and an employee lounge repurposed as a wardrobe department.

“I wouldn’t say it’s ‘industry standard’ because it’s a vacant Staples building,” quips Mischa Jakupcak, co-proprietor of Zoo Break. “But as somebody who’s been on over 30 feature films, I know there’s nothing we would need that isn’t here. It’s five minutes from the airport, a one-minute walk to downtown Burien. There are hotels, free parking, a post office across the street. It’s a producer’s dream.”

The space had been empty for five years when Jakupcak discovered it last October while scouting for an empty warehouse in which to shoot a pilot for Adult Swim. After the production wrapped, she watched carpenters dismantling the scenery flats and thought to herself, “Oh god, I know we’re gonna need these in six months for something.” She talked to her husband, Robyn Miller, a filmmaker and composer who co-designed the best-selling 1993 video game Myst. They decided to take the risk. In January they signed a year lease.

In order to be financially viable, Zoo Break will need to attract commercial clients, especially episodic television shows of the sort that have mostly been lured away to Portland and Vancouver, BC. A continuing, long-term production would sustain the stage and make it accessible for local, independent projects like Wes Hurley’s next feature film, Potato Dreams of America, which will shoot here this summer.

In a fragile, interdependent film ecosystem, indie creators like Hurley are the ones most impacted by the overheated Seattle real estate market and its ensuing displacement. He recalls searching for space during the filming of his Capitol Hill web series after a planned location fell through. “I was panicking,” he says. “I walked around SoDo and Georgetown for hours looking at all the huge empty warehouses. I called hundreds of numbers and not a single person even replied. They’re just sitting on real estate waiting to sell it.”

Beyond day-to-day operations and long-term survival, Jakupcak has a grander vision: to build a hub for the production of virtual reality (VR) and augmented reality (AR) films. Degenerate Art Ensemble just finished shooting their new immersive VR album Skeleton Flower here; the piece features volumetric and 360-degree photography as well as a gaze-controlled interactive menu. Jakupcak directed one of the tracks. She also collaborated with Seattle filmmaker Tracy Rector on last year’s 360-degree VR film Ch’aak’ S’aagi (Eagle Bone) which had its world premiere at Toronto International Film Festival and will screen at Seattle Art Museum in June. Jakupcak hopes to build on the region’s existing talent to branch out further into this emerging media, and Rector aims to shoot her next VR project this May with Jakupcak and an all-woman crew.

“Seattle is perfectly situated because of the resources and the technology,” Jakupcak says. “But it’s not yet all connected. It’s a matter of championing the efforts, trying to connect the people who have the technology with the artists and storytellers so it can bring up the entire region.”

In the meantime, Zoo Break continues to build out its space. They’re waiting on a shipment of soundproofing that once hung in the Kingdome, and Pacific Grip & Lighting is setting up an equipment outpost at one end of the building. The electrical system has been upgraded to handle several large-scale productions at once.
Zoo Break is a new improvisation on the familiar theme of art versus commerce. As the largest camera-ready facility in the area, it represents a potential flagship for the local film industry—a makeshift new hope for a creative community shoved around by market forces. Hurley, who’s already directed one short film here and has come for a production meeting about his upcoming feature, looks across Zoo Break’s stripped-down expanse, cluttered at the edges with scenery flats, plywood and a hodgepodge of large equipment.