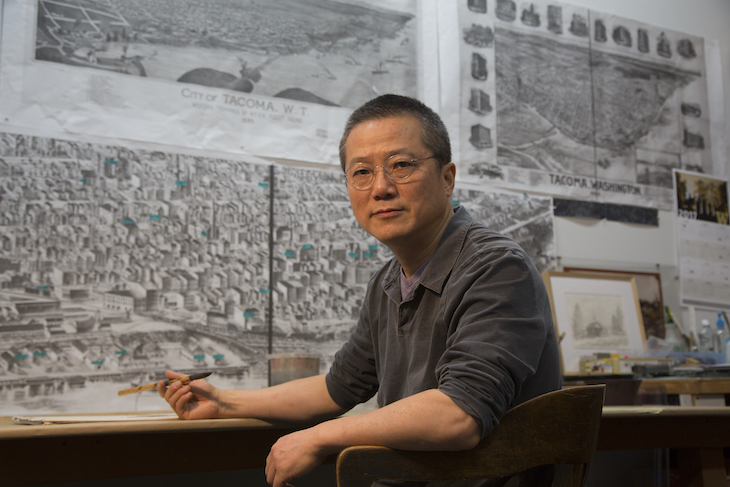 The weather had turned. October had departed for the liminal stage between autumn and winter. And yet professor and artist Zhi Lin felt compelled to brace the cold to walk along the railroad track of the prairie line in Tacoma. He wanted to feel a fraction of what Chinese Americans felt when they were forced to take this route after being chased out of their houses and city in early November of 1885, when Tacoma mayor Jacob Robert Weisbach had pronounced the Chinese Americans a “filthy horde.”

Lin, who was born in Nanjing in China, studied in London and Delaware and now teaches drawing and painting at the University of Washington, traces that strenuous history in In Search of the Lost History of Chinese Migrants and the Transcontinental Railroads at Tacoma Art Museum, as well as in a show at Koplin Del Rio gallery in Seattle, which recently closed.

Through video, paintings and drawings in Chinese ink, Lin tries to write Chinese immigrants into the history books from which they’re absent—including those who built the Transcontinental Railroad in the West and those who were pushed out of their cities with the Chinese Exclusion Act of 1882, which put a 10-year moratorium (later extended until 1943) on the immigration of Chinese laborers. This in turn encouraged violence and racism against the people already living here and spurred the 1885 expulsion from Tacoma.

“We never gave them a shrine or monument,” Lin says when we sit down on two chairs in the middle of the spacious Prographica / Koplin Del Rio Gallery. Sounds of train whistles from a video piece—a reenactment of the 1869 Golden Spike Celebration—punctuate our conversation. “My aim is to excavate these people from our memory and history. Reclaim the importance of the Chinese-American contribution.”

How did you do that?
With extensive research. I’m not satisfied just reading books. So I went through original court files, affidavits, testimonies, Washington State archival records, inventories of the amount of shops damaged, burned and looted. Twenty-one houses were burned down in what was then Chinatown. I found the exact date they started pushing the Chinese out in Tacoma. I found that they expelled more than 197 people—218 to be exact.

Were you surprised by what you found?
I knew the expulsion happened, but was shocked to learn of the propaganda that preceded the expulsion for months. Publications from churches to businesses, from sheriff to mayor and city attorney: They all lined up for this expulsion—or, let’s call it what it was, ethnic cleansing. They plotted it successfully and managed to prevent the Chinese from returning. You can still see this in Tacoma today; there’s almost no Chinese community. I recently gave a talk to a group of people who graduated from an elite school and they didn’t believe it. But I work really hard to make people never forget about it. My work is always about social injustice. About how we dehumanize other people.

Does the fact that you are a professor have to do with your penchant for thorough research?
I don’t want to base myself on what I know. I’m trained as an observational painter, was taught to draw very realistically. The key to figurative painting is to figure out what’s underneath the surface, I tell my students at UW. To draw a shoulder you need to understand the muscles, the bone structure underneath — that’s what creates motion and structure. It’s the information that lies underneath that’s important.

In many of your drawings, humans are absent. The scenes are desolate. How come?
The style of the drawings are based on American 19th-century Survey prints, when the federal government commissioned expeditions to research different parts of the U.S., including the Pacific Railroad Surveys. The artists on those expeditions had to record what they saw as a camera. I paint what they chose not to paint: Chinese contributions to the construction of the railway. I chose to connect it to today’s scenery, but painted it from the tracks, from a Chinese worker’s point of view. When those people walked out of the city, what did they see? Even though the landscape has changed, we can still retrieve possible scenes or landscapes.

You do something similar in the long scrolls exhibited in Tacoma Art Museum, where you depict the 1885 expulsion in today’s environment. Why’s that?
Originally, I wanted to create an old history painting with old buildings, tailors, saloons and so on. I decided not to. Instead, I re-staged the scene in a contemporary setting, with the light rail track, skyscrapers, traffic signage nearby. To say, we are repeating history. Literally. I recently spoke to the assistant of Washington’s Attorney General Bob Ferguson, and she told me Trump’s travel ban [the 2017 executive order barring mainly people from countries with a Muslim majority] is based on the Chinese Exclusion Act of 1882. Yesterday it was the Chinese, today it’s people south of the border or people with different faiths. We are doing it all over again.

Zhi Lin: In Search of the Lost History of Chinese Migrants and the Transcontinental Railroads is on view until Feb. 18 at Tacoma Art Museum.