“This wasn’t made to make you feel good. It’s supposed to make you uncomfortable,” Yadesa Bojia says of his new solo show Truth Be Told, which opens Saturday at the Art/Not Terminal Gallery at Seattle Center.

When I meet him at the gallery on a recent afternoon, Bojia is calm. He stands confidently and wears a headband on to keep his dreadlocks from falling on his face. I learn he’s been painting for over 20 years, but also works full-time as a graphic designer. He pulls out his phone and shows me an image of Barack Obama with the African Union flag behind him. “I designed that,” he says of the flag. “I submitted the design to a competition and found out that I won years later while watching CNN.” 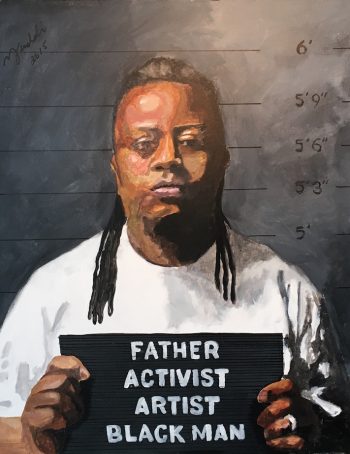 Truth Be Told includes a series of eight paintings of mugshots, all of people of color. Each painting has a grey background and in the hands of each man and woman is a placard stating their crimes. The people are painted with bold, free strokes in rich hues of brown, red and yellow.

“One day while I was driving, I was listening to an NPR interview with [civil rights attorney] Constance Rice, who sued the LA Police Department during the Rodney King times,” he says. Rice worked on civil cases related to police misconduct in the 1990s, winning major cases against the LAPD for their treatment of minorities. “She interviewed some 700 people and she said every time she interviewed a police officer they said, ‘I’m afraid, that’s why I did this.’” The mistreatment of minorities fueled Bojia’s desire to create these paintings. To confront false stereotypes head-on.

In the center of the gallery are three paintings, two medium-sized pieces and one large polyptych called, “We Can’t Breathe” consisting of nine small paintings. This polyptych is a portrait painted silk screen-style, reminiscent of icon art from the pop era. In one painting, a man smiles, his joy infused with umber and amber siennas. I realize it’s Eric Garner, who died while repeatedly pleading “I can’t breathe” as he was pinned against the cement by officers who had a chokehold on him. Written across the Garner portrait are the names of more than 80 unarmed Black citizens who have been killed by police officers since 2016.

Those 80 names are not the only ones whose lives have been taken behind police brutality. “There’s plenty more people,” Bojia says.

Directly beside Garner’s portrait is a dark, luminous painting of a hand in shadow extending out to a cloudy sky. A slight glimmer of light peaks from behind a cloud. This painting of a hand outstretched is called “I Can’t Breathe.” “That painting is how I imagined what Garner’s last breath looked like,” Bojia says. To create it, he Googled the street view of the location where Garner was killed.

As I sit looking at the light-to-dark contrast between Bojia’s two Garner paintings, it gets quiet. “Jingle Bells” plays across gallery’s sound system and I feel disturbed thinking about what this time of year means to some people, and the scores of those affected by the loss of every name on Bojia’s painting.

Not all of the work in the show focuses on American concerns; some relates to events taking place in Bojia’s homeland of Ethiopia. A large portrait depicts the moment Olympic silver medalist Feyisa Lilesa crossed the finish line in Rio and raised his arms crossed in support of his fellow tribe members in Oromo, who have been protesting against the government since 2014 for the systematic marginalization and persecution of their tribe. According to Olympic policies, political demonstrations are not permitted in Olympic areas. Lilesa’s demonstration cost him his livelihood and forced him flee his country in fear for his life.

Many people have lost their lives in the Oromo protests—and, similar to the Garner paintings, Bojia writes some of their names across Lilesa’s image. “He’s our Kaepernick right now,” Bojia says of Lilesa.

This is a story Bojia knows too well. When he was two and living in Ethiopia, his father—an activist involved in politics—was killed and the family fled the country for their safety.

“I’m not looking to be something,” Bojia says of his purpose as a painter. “I always wanted to speak for the people.”