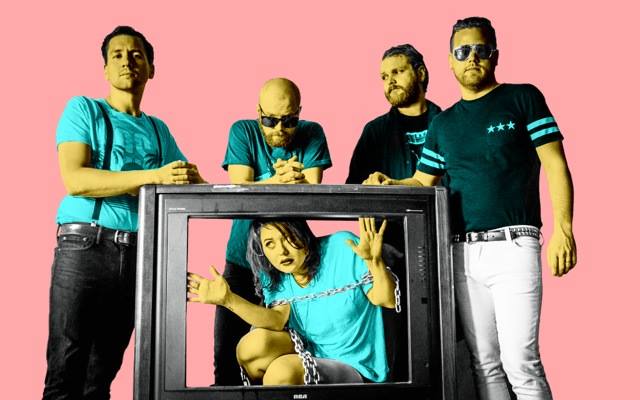 The video for the Young Evils’ latest single, “It Happens All the Time,” is a pre-millenial analog throwback, an almost-shot-by-shot remake of the video for the INXS’s “Don’t Change” from their 1982 album Shabooh Shoobah. Filmed in a day at Seattle’s B47 Studios, it came together more easily than their most recent record, the False Starts EP, which sat in label purgatory with former Universal subsidiary Fairfax Records for months before the Evils were able to miraculously extricate themselves from the contract and walk away with the recordings. (That EP is available for download here.)

The idea for the video started with director Norma Straw dancing in her office to “Don’t Change” on KEXP’s The Morning Show. After the song played, DJ John Richards called fellow DJ and Evils guitarist Troy Nelson into the booth. He suggested Nelson and his bandmates do a cover—not of the song but the video.

Listening to this conversation over the radio, Straw says, “I was like, ‘Exactly! I’ve been thinking about doing this for a long time’.” She’d been looking for a pilot for a webseries idea she cooked up with Nick Harmer (bass guitarist for Death Cab For Cutie) in which they’d recreate old music videos from the low-budget, pre-MTV days with contemporary music. She got in touch with Nelson and they quickly put the shoot together with help from friends like hotshot cinematographer Angela Bernardoni and B47’s editing maestro Graeme Lowry.

The result, premiered below, hews strikingly close to the original, both visually and in spirit. Check out Mackenzie Mercer doing her best androgyne Michael Hutchence, Troy Nelson committing hilariously to the lip-sync (showing his sketch comedy roots) and friend of the band/super-producer Erik Blood filling in on truckbed synth in ’80s safari gear.

And the original INXS video for “Don’t Change”:

See the Young Evils February 3 at the Neptune with TacocaT and Ty Segall for the Sasquatch Launch Party.