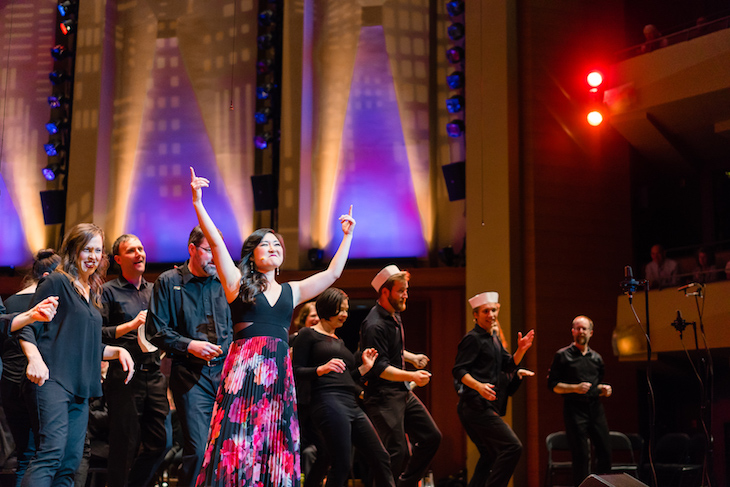 What’s amazing about Leonard Bernstein’s Wonderful Town is that the story is true: Two sisters from rural Ohio arrive in New York in the 1930s to seek their fortunes; one of them writes stories about their struggles and adventures. A movie was made from the stories and a decade later came Bernstein’s exuberant musical. Pulsing with life, Bernstein’s Wonderful Town gives us a snapshot of New York life as the sisters, Ruth and Eileen McKenney, experienced it and as Ruth wrote about in 1938 for the New Yorker.

As part of its two-week celebration of Bernstein’s centenary, the Seattle Symphony has mounted a semi-staged version that debuted Thursday night at Benaroya Hall.

The concert began with the world premiere of composer-in-residence Alexandra Gardner’s ‘Significant Others” which, the composer says, jumped off from Bernstein’s penchant for serial relationships, all of which had meaning for him, if fleetingly. Gardner has a fine feel for orchestral colors and her 11-minute work develops through many different sections representing different relationships, beginning from near-silence and ending the same way. The whole is tied together with a jaunty, jazzy, cheerful outlook, but after an interesting first half the work begins to feel too long for the material.

As a taster before Wonderful Town, music director Ludovic Morlot presented a rarely heard Bernstein piece, his “Prelude, Fugue and Riffs.” It’s a joyfully noisy work for trumpets and trombones in the Preludes and a bunch of saxophones in the Fugue. Both of those sections are accompanied by percussion, piano and double bass and all those instruments are joined by a solo clarinet in the Riffs. As always with Bernstein, the musical’s inner workings are intricate and the riffs stratospheric. The orchestra’s principal clarinet, Benjamin Lulich, says he had the chance to channel his Benny Goodman (who played the premiere) and he clearly was having a great time doing it, but much of the time the details of his playing were hard to hear above the splendid cacophony of the brass.

This was a fine mood setter for Wonderful Town, which began with some chorus members as New York tourists led down the aisle by singing tour guide baritone Christopher Kenney. Eleven soloists are led by mezzo-soprano Kristen Choi as a larger-than-life Ruth, soprano Jessica Rivera as her gentler sister Eileen and bass-baritone Kevin Deas as the reporter Bob Baker who falls in love with Ruth.

The rollicking story unfolds with one great song after another: “Ohio” (who’d ever think of ‘oh why, oh” as a rhyme for Ohio? Lyricists Betty Comden and Adolph Green, that’s who), sung by the homesick sisters; “One Hundred Ways to Lose a Man,” from the intellectual but earthy-sounding Ruth; “Pass the Football” sung by baritone Thomas Meglioranza as the Wreck, the football star who failed everything else in college; Bob’s lovesick longings in “A Quiet Girl,” plus a host more, including a conga line of sailors and policemen.

The whole was a delight, with so much to take in between the soloists, the orchestral music behind—including, near the end, a fine prominent solo from Lulich—the choreography by Katy Tabb, Seattle Symphony members portraying New Yorkers, tourists, conga dancers and more, singing all the time.

Soloists wore mics, a good idea since the orchestral accompaniment could easily have drowned them out. The audience was invited to conga out of the auditorium at the end as the orchestra reprised the final conga line music, but only a few did.

The performance is repeated on Saturday, June 16.