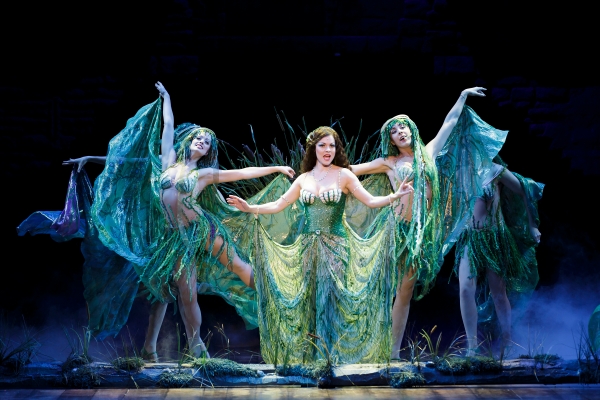 5th Avenue Theatre goers got an extra treat last evening at the opening night of Spamalot. You expect a lot of laughs from a show that draws on the comedy film classic Monty Python and the Holy Grail. You don’t expect to have Monty Python co-founder and Spamalot creator Eric Idle getting up on stage afterwards to lead the audience in a singalong of “Always Look on the Bright Side of Life” (from another Python film Life of Brian).

It put the cherry on top of a terrific evening. Spamalot is such a giddy and razzle-dazzle slice of entertainment, it was hard to tell who was having the most fun—the cast or the audience.

The show is something of a love letter to Python fans, who were certainly in attendance last night, giggling with anticipatory pleasure when a giant wooden rabbit was wheeled on stage, and nudging each other when well-known lines were delivered. If you chuckle when hearing the word “Ni!” you’ll feel right at home. The killer rabbit, the Black Knight (“It’s just a flesh wound”), and “Bring out your dead!” are all present and accounted for as well.

But this isn’t simply a retelling of the Holy Grail film story with some songs thrown in. The Broadway musical (Spamalot opened on Broadway in 2005) also pokes fun at the conventions of Broadway musicals. Lushly romantic Andrew Lloyd Webber melodies are brilliantly sent up in “The Song That Goes Like This,” first performed by Sir Galahad (Louis Hobson) and the Lady of the Lake (Laura Griffith) in a fog-laden tableau complete with flickering chandelier (sadly, unlike its Phantom of the Opera counterpart, it doesn’t crash). “Knights of the Round Table” transports you from fusty old Camelot to the neon-lit Excalibur casino in Las Vegas, complete with showgirls and Griffith in an outfit that would rival any of Cher’s. And Sir Robin’s (Matt Owen) “You Won’t Succeed on Broadway” emphasizes the importance of the Jewish element in show biz with lines like “There’s a very small percentile/Who enjoys a dancing gentile,” coupled with an homage to Fiddler on the Roof, complete with a line of bottle dancers (with grails in place of bottles).

Griffith’s Lady of the Lake is the show’s new character (who comes with an entourage, the “Laker Girls”). Her vocal pyrotechnics are astonishing (outdoing even Broadway’s Lady, Sara Ramirez), and used to especially good effect in Act Two’s “The Diva’s Lament”, wherein the Lady bemoans her shrinking role (“Whatever happened to my part?/It was exciting at the start”). Another highlight is “His Name is Lancelot,” wherein Sir Lance (Dane Stokinger) discovers his inner queen. The buoyant ensemble tumbles around on stage like frisky puppies, with a costume change for virtually every scene (the ensemble, and most of the leads, all tackle more than one role as well). And Allen Fitzpatrick and Greg McCormick Allen are suitably stalwart as, respectively, King Arthur and his faithful steed, Patsy.

Even the sets are a little extra special; in his curtain speech, Idle explained they were the ones used on Broadway. The 5th Avenue’s Spamalot is a wonderfully funny night out, the kind of show where the laughs come so fast you can’t wait to find out what the next joke will be. Ni!

Spamalot runs through March 2 at the 5th Avenue Theatre.

Pictured above: Laura Griffith, center, stars as the Lady of the Lake in the all-local cast of Monty Python’s Spamalot at The 5th Avenue Theatre.  Photo by Mark Kitaoka.