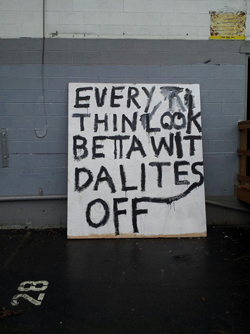 I’m a day late writing this column. I am writing it from the Project: Space Available residency studio. I’m sleeping on an Ikea futon without any blankets. Techno beats and muffled babble from Moe Bar are bleeding through a thin wall. I’ll wash my hair in a sink tomorrow and go to Home Depot to buy AstroTurf for an installation at Hedreen. Then come back and perform a ritual reading. Dk Pan (my residency collaborator) and I are looking for holy ghosts in this space. We’re both pastor’s kids, so it seems to make sense. Biz Markie is playing through the thin wall now. Volumes by Unica Zurn, Jean Lorrain and Rene Daumel are strewn on a white floor at my feet. I probably won’t be able to sleep tonight. This is bohemia! I think. 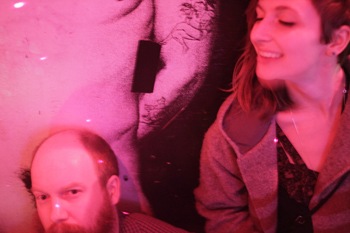 SANDWICH ARTIST
Amateur-DJs-with-day-jobs-in-the-arts night was last Thursday, apparently. Derek Erdman spun vinyl at Pony. My drinking companion was thrilled to hear him play Liaisons Dangereuses as we squished green vodka-smelling jello shots (flavor du jour: “Gangrene”) out of little paper cups into our mouths. That same night, City Arts’ own Jonathan Zwickel manned the decks at St. John’s. However, most of the time I was there he was just eating a sandwich. “It’s performance art,” he said wryly when I pointed this out. I couldn’t argue. I like food in my performance art. (Pictured at Pony, left: Ryan Molenkamp and Vignette’s Sierra Stinson)

UN COUP DE DÉS
Friday night at Vignettes was the one-night JD Banke exhibit, CALL OF THE MILD. Banke is still a student at Cornish, but SEASON’s Robert Yoder has already scooped him up and is representing him (a big Banke show at SEASON coming soon). The first time I encountered Banke’s work was very recently, outside this year’s ONN/OF Festival: a big plywood sheet spray painted “EVERY THIN LOOK BETTA WIT DA LIGHTS OFF” (writing it out in print doesn’t do it justice). It was one of my favorite pieces at the Festival.

Banke makes slacker art, which can be hit or miss. This style falls squarely in the category of “my kid could do that” stuff. All the work in his show was silkscreen, runny acrylic on wood boards and spray paint on paper. “He made all of these yesterday,” Stinson said when I visited, pointing to a series of small silk screened paintings on wood, reproduced en masse. The repeated image was the blue zigzag found on disposable paper cups. Banke painted the word “EMPTY” over them.

Despite the apparent nonchalance, Banke’s work hits humorous and graphically-pleasing notes. There were pieces I unequivocally wanted to buy and take home with me, like the painting I ROLLED THE DICE WHEN I DECIDED TO HANG OUT W/ MOLLY DRINK COKES IN CAL ANDERSONS YARD. SHE MADE ME FEEL WEIRD, NOT UNLIKE A WASTOID. And he actually put a pussy on a pedestal (at least, a painting that said “PUSSY” on a pedestal). Everything’s a gag, flippant, weirdly sentimental. CALL OF THE MILD comprises an apartment-sized alter to spent flesh, half-assedness, mediocrity, emptiness and tripping. Everything’s indeterminate. Yes’s or no’s are equally absurd. Everything a maybe. Nothing matters. Banke is the new NW face of slacker bohemia! 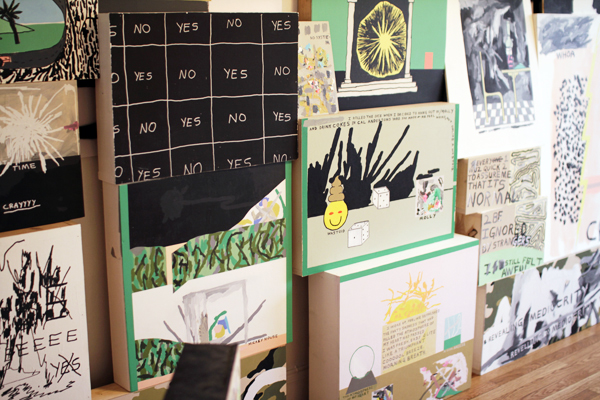 LOTS OF ARTISTS, A FEW GHOSTS
Sunday was open house at INSCAPE. There is some odd stuff in that building that doesn’t really need to be mentioned in this column, but will be anyway, like the Northwest Museum of Legends & Lore, which offers an oxygen bar with an antique wingback chair and a rather antique, medical-looking oxygen tank, a scale model of the ’62 Seattle World’s Fair, and a slew of Bigfoot artifacts, like castings from his big, hairy footprints. 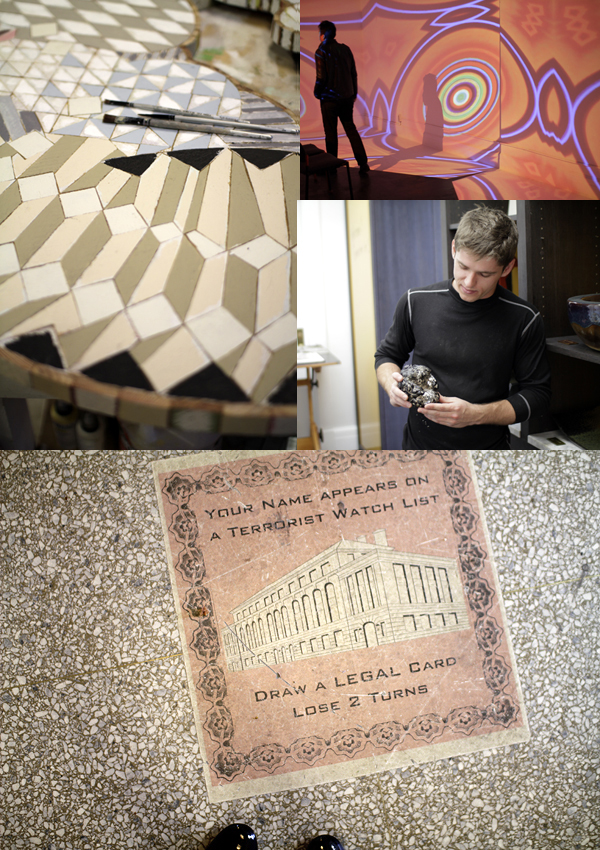 (above L-R clockwise: Julia Haack, Julius Brown, Trevor Foster at Wascha Studios and a morbid little game someone installed along the hallway floors)

Other inhabitants of the former INS building have….less speculative practices. Like Seth Damm. His studio is home of the Neon Zinn line of rope jewelry. He twists, ties, knots, dip dyes chunky rope. It’s not a noose, it’s a necklace. These accessories aren’t something everyone can pull off, but in a perfect world everyone would be draped in such avant garde, faded-neon-sorbet cordage. I dare you to try. 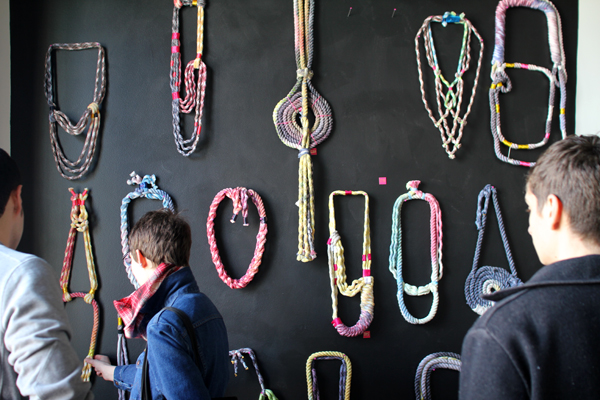 SOME THINGS YOU PROBABLY SHOULDN’T MISS (or do, slacker!):
Wednesday (tomorrow): at Neddy at Cornish Annual Lecture Susan Robb is having a conversation with Oliver Herring. Taking place at The Playhouse at Seattle Center, moderated by the very smart Ken D. Allan. Will Herring be in Seattle, in the flesh, or is Robb Skyping him (something she’s been doing as part of performances at Cornish lately)? I inquired. “Hmmmmm. Not sure….” she responded. Hmmm! Either way, go.

Curious about art and copyright law and want to learn about it while throwing back a beer in a decidedly non-law-office environment? Lawyer and arts aficionado Benjamin Kerr is giving an Art Law Lecture at Canoe Social Club on Wednesday at 7 pm. $5 if you’re not a Canoe member.

On Thursday at 6 pm, the opening reception at Greg Kucera Gallery for Edward Wicklander and William Burton Binnie. Or go to the artist talks on Saturday at noon. Binnie’s decadent paintings of sausages and other meats slick with grease are sure to inspire hedonistic dining. (Head to Von Trapp’s afterward.)

On Friday, March 8, the ARCADE Magazine Launch at The Bullitt Center. These are always fun art-poshy parties with smart people.