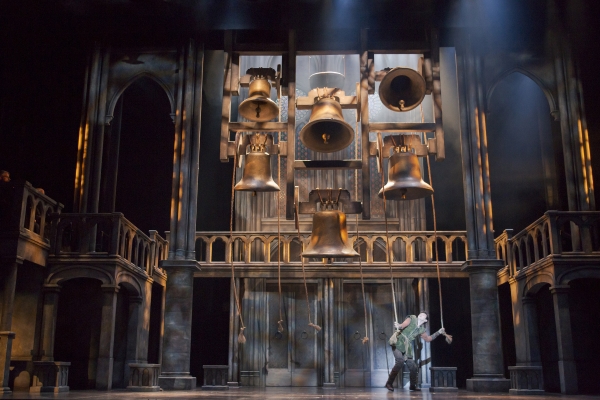 Before diving into the splashy production of The Hunchback of Notre Dame now running at the 5th Avenue Theatre, a cast of characters is in order, as this musical adaptation is based on both the Gothic 1831 Victor Hugo novel and the very-G-rated 1996 Disney film.

As always, our hero is Quasimodo, the “half-formed” bell-ringer of Notre Dame Cathedral, who lives locked away in the bell tower. Dom Claude Frollo, the archdeacon of Notre Dame cathedral, is Quasimodo’s warden and, in this adaptation, also his uncle. Then Captain Phoebus, a soldier and captain of Notre Dame’s guard. Esmerelda, a beautiful and compassionate gypsy woman who becomes the object of all their affections. There’s also Clopin, king of the gypsies, as well as a huge ensemble of gypsies, clerics, Parisians and a cathedral choir, played by the Pacific Lutheran University Choral Union.

From his perch high above 15th century Paris, Quasimodo (Joshua Castille) spends his days with his bells and his best friends, the cathedral gargoyles. With their encouragement, Quasimodo defies Frollo’s (Allen Fitzpatrick) orders and sneaks away to enjoy the citywide party known as the Feast of Fools. When the crowd turns cruel on Quasimodo, Esmerelda (Dan’yelle Williamson) steps in to rescue him, setting into motion events that almost destroy Paris. (This vivid Paris was created by scenic designer Stephen Gifford, lighting designer Jared A. Sayeg and costume designer Marcy Froelich.)

The leads in this show are excellent, adding layer upon layer of texture to this rich Gothic world, not to mention singing the hell out of a score by musical theatre hit-makers Alan Menken and Stephen Schwartz that traverses classical religious motifs and pop-theatre sounds with ease.

Fitzpatrick’s earnest and excellently sung performance brings Frollo into three dimensions, and as he descends into uncontrollable lust for Esmerelda his bewilderment mixes with frustration into a brackish rage. Brandon O’Neill imbues Phoebus with enough rakish charm to animate a tin man and Dane Stokinger brings a knife-edge temperament to the sly, seemingly jovial Clopin.

The show’s emotional heartbeat is Castille’s expressive, specific performance as Quasimodo, tender and tortured, fearful but finding his way, every tiny detail documented in his physicality. When Quasimodo begins to sing, Castille, who is Deaf, switches his performance from spoken English to ASL, and E.J. Cardona provides Quasimodo a stunning singing voice, and the two actors perform together—an additional separation between Quasimodo and the world bridged to beautiful effect. (Ensemble performances, it must be said, are all over the place—some are excellent, others stiff as real gargoyles.)

From a less-than-delicate script, director Glenn Casale delicately teases out the more interesting themes of Hunchback: kindness and cruelty, why and how we give and receive them and how those experiences affect us. These emotional beats are the narrative lily pads on which the show floats: The gypsies attack  Quasimodo. Quasimodo shares his Cathedral sanctuary with Esmerelda. Frollo only speaks English to Quasimodo, while his friends the gargoyles—and later, the kind Esmerelda—speak with him in ASL. Frollo, in his righteous zealotry, locks Quasimodo away, and later offers to save Esmerelda’s soul, for a price—cruelty in the guise of kindness.

But this adaptation is so focused on how Quasimodo’s otherness affects his life that it neglects Esmerelda’s. In this moment of incel awareness, there’s something supremely icky about three men pursuing one heavily exoticized woman who has, at that point, expressed no romantic interest in any of them. (She later falls for one, of course, in that inexplicable Disney way, baffling and chemistry-free through no fault of the actors.)

Sure, we all know that Frollo is a bad man, so no one is mistaking the fact that he’d burn down Paris because Esmerelda won’t bang him for a classy move. But the show lets him make an impassioned case for why the burnings—of Paris and Esmerelda herself—are actually Esmerelda’s own fault because the choice, to bang or not to bang, was hers. Then we have kind-hearted Quasimodo, who wants to bring her back to his bell tower to keep her safe, “a little like a bride.” Phoebus, arrogant and handsome, also pursues her for her own protection. They’re all trying to save Esmerelda, a woman whose only clear personality traits are compassion and self-sufficiency (tightly tied up in her sexuality, but still). How did she end up as a plot device?

The response “but this story isn’t really about Esmerelda” is part of the problem. There’s plenty to enjoy in this Hunchback, a show that’s bright, light and dense all at once. But I’d rather see this talented cast put to better use.

The Hunchback of Notre Dame runs through June 24 at the 5th Avenue Theatre.