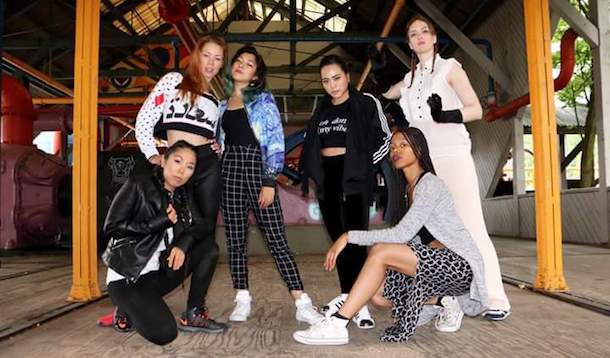 At 22, Angel Alviar-Langley has already established herself as a trailblazer in the Seattle dance scene. She’s a member of Au Collective, the celebrated dance group that centers women, queer folks and people of color, but she also has one foot firmly planted in the street dance world. Under the moniker Moonyeka, Alviar-Langley performs, battles and teaches popping, a dance form built around quick contractions of muscles and improvisational rhythmic play. While Seattle has seen a number of celebrated women in breakdance, she’s one of only a few women in the male-dominated technique of popping, a fact that inspired her to pursue ethnographic research through the UW Dance Department on how women who pop navigate a male-centric scene. Last year, she founded What’s Poppin’ Ladiez?!, an annual festival celebrating and making space for womxn popping artists from across the country. This year’s festival runs July 28 – 30, bringing classes, performances, battles and speaking panels to venues around the city.

How did you start dancing?
I feel like I have been dancing since I was kid—as a social thing you did outside of the cafeteria during lunch, at Filipino parties, in my room, giggin’ with my friends. I lived in South King County and the outskirts of Seattle—there was just a lot more brown kids around me growing up—and all of us would blast hip-hop music.

From 2011 to 2013 I was a Running Start student at Highline Community College, where I watched a lot of cyphers go down in the Student Union Building. I was way too shy at this point in my life to participate so I assumed the position of wallflower. I insisted that I couldn’t dance to avoid getting into the cypher. My friend Asha Omar Salim, president of the HCC Hip-Hop Club, was very encouraging and made me feel welcome in the space. She was one of the only girls kickin’ it with all these boys. She eventually got me into a cypher, and while I was nervous, I never felt freer.

What’s it like to be inside a battle?
When I’m battling, I see it as a conversation. Someone may make the conversation about rhythm, flow, flexibility, etc. And I have to figure out how to respond. Or if I’m going first, I’m setting the tone. It’s a circle with three different types of audiences: the opponent, the judges and the crowd.

Since I’m still very much a student, popping still sometimes feels uncomfortable. People so often focus on the muscular contraction, creating the “hit” or “pop,” but I aim to find how I can still be relaxed within a form that seems like it focuses on tension in the body. My favorite mentors have always said that popping should be approached as easily as how you walk. It’s easy to get caught up in the technique behind popping (since popping is an umbrella term of over 70 different substyles, one can get overwhelmed), but most people forget to just simply dance.

What was the impetus for starting an all-women popping event?
I didn’t see women present in the scene with the exception of women who took the money for entry to battles and a few B-girls. It often felt like the women who did battle, battled in a way that served the male gaze. I really didn’t see a reflection of myself in the space. I had a streak of attending battles where all the judges were men, the MC was a man, the DJ, the organizers, the invited battle guests, they were all men. At the time, I felt very alone as a woman who was aspiring to be a dope popper.

How does that lack of representation affect the popping culture?
I’ve witnessed men, who battled against me or other women, mock femininity, which involved a lot of hypersexualization and their weird-ass ideas about what femininity in hip-hop looks like. To them, this is a battle tactic; to me, this is bullshit. They didn’t make their battle about the exchange of technique, storytelling, or any other thing, they made it about gender.

What are your hopes for the future of the form?
I hope this dance form is more proactive in making spaces feel safer. I hope the OGs and future leaders in the culture do a better job of not only teaching the technique behind the movement, but also how to properly support women. I hope that my REMIX girls that I teach can live in a reality where they are respected at battles and in street styles, that they aren’t alone, and that they don’t have to hate on other young women to get where they’re going.

For a full lineup of events, visit the What’s Poppin’ Ladiez?! 2017 event page.