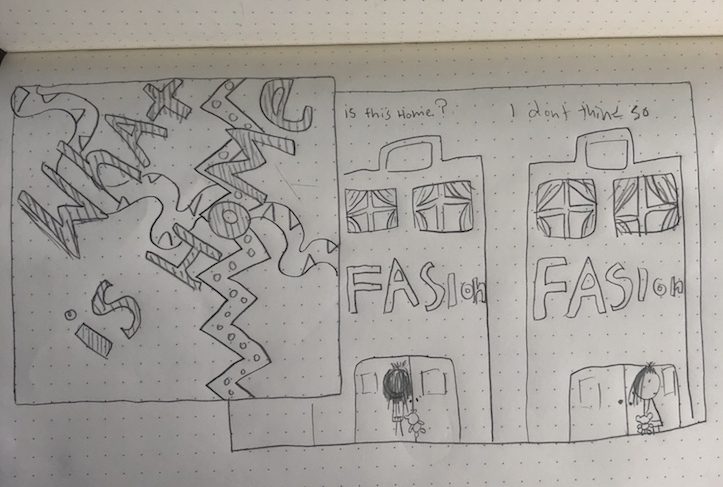 When I meet Alex at the restaurant Flowers in Seattle’s University District, her nine-year-old daughter Patty is drawing the words What is Home? in her composition notebook. The inscription is the finishing touch to a hand-drawn mini-saga about the search for domestic stability.

Patty’s illustration shows a young woman entering a building that hosts ground-floor retail space and upstairs living space. “Is this home?,” a caption asks atop the page as the figure enters, reflecting the inner monologue of the hopeful tenant. The next panel reads “I don’t think so” as the character exits the building and continues her hunt for home. Because casually declining available housing isn’t a luxury many in Seattle have, the agency of Patty’s protagonist marks her narrative as fiction.

Politico recently published a feature about local housing debates, concluding that Seattle’s supply of 32,000 new units since 2010 is woefully inadequate to service the massive influx of new Seattleites—an estimated 100,000 in the same period. That Seattle neighborhoods like Wallingford are epicenters of contentious conversations about the impact of racial segregation on population density, the pitfalls of tech-centered growth and the vicissitudes of global capital contrasts greatly with the sleepy appearance of these areas. True to its stereotypically passive-aggressive style, Seattle’s benign appearance belies a class and culture war for living space.

Once upon a time in Seattle, Alex thought she found an answer to Patty’s question. When they moved into a development called Bridges@11th in 2015, the University District complex was a model for the city’s fledgling Multifamily Property Tax Exemption (MFTE) program. Started in 1998 and later expanded under Mayor Ed Murray, MFTE is a tax exemption provided to developers who set aside a quarter of units in their buildings for people making 60-90% of the area’s median income (AMI). Bridges@11th is unique in that a special affordable housing covenant in the property’s deed caps rents at 75% of AMI. “It shows us that we can create affordable housing in Seattle, so we’re proposing expanding the MFTE program,” Murray explained while touring a Bridges@11th unit in 2015.

Things changed for Alex and Patty when Bridges@11th changed ownership. “American Campus Communities took the building over in October 2017,” Alex tells me. “Before that, we were like the poster child for affordable housing. October was when all the drama started.”

Alex says that American Campus Communities (ACC) has authored a series of measures designed to clear current tenants from the three University District properties it acquired in 2017: The Hub Seattle, Twelve (formerly AVA-U District) and Bridges@11th. After trudging through ACC’s corporate history and organizing with other tenants who have experienced similar mistreatment at the hands of ACC, she concluded that the company’s intention is to remake the properties into “pack and stack,” dorm-style housing. The facts and accusations of Alex’s story implicate anti-tenant legal loopholes and institutions and indicts a free-market-centered approach to housing that has plenty of adherents in Seattle.

Shortly after ACC took over Bridges@11th, the company opened an online portal to facilitate rent payments from tenants. ACC charged tenants who did not enroll a $45 fee, so most signed up, including Alex. To her shock, when her rent came due in January 2018, she was billed $4595.22—more than double her monthly rate. She initiated an email conversation with an ACC manager about the mistake and was told that she “authorized” the charge by enrolling in the auto-pay portal. Because the overcharge and the resulting overdraft fees left her unable to buy food or pay other bills, Alex refused ACC’s offer to have the overcharge count as a credit towards the subsequent month’s rent.

Alex successfully pleaded with her bank to reverse half of the charges, and a week later ACC refunded the overage of her January rent. Alex points out that this practice was a clear violation of a Washington State legal statute, which holds that landlords must give tenants at least 30 days’ notice for changes in the amount of rent due.

Alex learned that she is one of at least four other tenants in Bridges@11th and Twelve who were similarly overcharged by ACC. These tenants have not been notified of any formal changes to their rental agreements but consistently receive notices that they did not pay their full rents. “I think they’re trying to evict us through repeated compliance notices,” Alex says, pointing out that such notices provide legal cover under Seattle’s Just Cause Ordinance for landlords to separate tenants from their apartments.

Alex’s predicament has forced her to organize. She’s in contact with scores of other tenants who have suffered in one way or another at the hands of American Campus Corporation. She hosted a tenant’s rights workshop at Bridges@11th and maintains a private Facebook group for tenants of ACC buildings to share information. When she posted a survey to the doors of Bridges@11th tenants, asking if they felt their rights had been violated, she says ACC management removed them.

Alex presents a cascade of evidence supporting her central contention—that ACC is pressuring tenants to vacate so the company can radically overhaul their apartments. She outlined her grievances in an open letter replete with receipts and footnotes that she’s sending to the parties she thinks are responsible for the situation: ACC’s community partners at Children’s Hospital and the University of Washington’s Board of Regents, and City government.

Alex’s account of ACC’s alleged abuses includes, but is not limited to: illegal rapid-fire renegotiation of MFTE leases, with multiple tenants given mere days to either sign a new leases or be evicted; 27 tenants reporting consent-to-enter abuses committed by ACC officials who give less than the required 48 hours notice to enter tenant dwellings, then change and install locks in ways that disrupt tenants; and a climate of hostility toward organizing, including an episode where several Bridges@11th tenants met in their hallway in March 2018 to discuss attending an organizing session at the Washington Tenants Union and were discouraged from organizing by an ACC manager, and another incident where the Seattle Department of Construction and Inspections (SDCI) admonished a different ACC manager to stop impeding their tenants’ right to organize.

Randall is another tenant in an ACC U District property. He corroborates Alex’s story: “I met Alex at Washington CAN’s monthly meeting in March. When Alex told me that ACC was sued for discrimination and harassment after breaching a lease, that let me know that there is a lot to this,” Randall says, referencing a 2013 lawsuit against ACC heard by a district court in Michigan. A district judge acknowledged that the facts presented by plaintiff Joo Hwang Kim in that case “may have been true,” but the suit was ultimately dismissed because of Kim’s “failure to state a claim upon which relief may be granted.”

To Alex and Randall, ACC’s actions in Seattle have one goal: clearing their buildings of tenants so that they can reconstruct the properties they’ve acquired to pack in drastically more tenants than they currently house.

Randall says this process disproportionately distresses students of color from immigrant backgrounds, whose lack of proficiency with English and lack of knowledge of the law combine with cultural taboos about complaining to prevent them from speaking out about the treatment they’ve suffered from ACC. Randall points to Alex’s research around the changing demographics of the University District, which show a sharp increase in international students in the years to come.

Alex explains that ACC’s actions highlight the failure of an economic philosophy that “appreciates housing for its exchange-value, but not for its use-value.” This idea was first broached by Karl Marx in his 1859 text A Contribution To The Critique of Political Economy and has since been echoed in a 2017 essay by Anna Minton in the book The Right To The City: A Verso Report. “Today, in almost every city in the world, the property rights of owners trump the use rights of inhabitants,” Minton wrote. “Exchange value, which views the spaces of the city primarily as places for investment, is dominant.”

For vulnerable citizens like Alex and their families, there is a vacuum of power where the state ought to be. During his 2015 campaign to represent the city district where Bridges@11th is located, councilmember Rob Johnson, one of the recipients of Alex’s open letter, received buckets of campaign contributions from Seattle’s business community, including tens of thousands of dollars from a pro-private housing political action committee that once referred to renters as “inferiors.” Since assuming office, Johnson has facilitated controversial “upzones” that hand over large swaths of square footage to private companies to spur development. The approach has its supporters, like free-market housing advocate Zach Lubarsky, who has opined that “Seattle’s housing market needs less regulation, not more.”

But not everyone is so enchanted with the laissez-faire approach that enabled the situation at Bridges@11th. In an e-mail interview, Seattle housing activist Jon Grant (for whom I was a field organizer in his unsuccessful bid for a seat on Seattle’s city council in 2017) wrote that “the city needs to have stronger enforcement of its tenants’ rights to rein in predatory behavior from developers and property managers. If the city had a reasonable rent stabilization policy that it applied across the entire housing market, it would eliminate the speculative motivation of companies to deal abusively with tenants.”

Seattle city council staffer Michael Maddux has endorsed many of Grant’s proposals, calling them “a bold move toward more housing” and adding that “social justice urbanists, as opposed to free market urbanists, look at things to make sure low-income people don’t get priced out of the city.”

Ultimately, housing debates are not only fodder for policy debates between political insiders, but a matter of life, prosperity, and the pursuit of an engaged citizenry that exercises its right to the city. Alex organized her fellow tenants at Bridges@11th to caucus in the 2016 presidential election. She fears a crackdown on tenants’ right to organize will corrode the city’s democratic process—a blow she and other renters across the city literally cannot afford to sustain.

“Landlord-tenant law does not guarantee equal housing access to non-students,” Alex writes in her open letter, cosigned by 30 tenants at Bridges@11th and Twelve. “Current ACC tenants and non-students seeking housing in the new urban center [planned for Bridges@11th] by ACC will have little protection. All of us feel that American Campus Communities has created a hostile space where we no longer want to live.”

If the situation persists, Alex may have to find a new apartment—or a new city altogether, somewhere she and Patty can call home. Before that day comes she’ll continue fighting for her family and her fellow tenants.

“My greatest hope is for people to see ‘left unchecked, this could be me,’’ Alex says. “It’s bad this is happening to us, but it’s worse that this could become the norm.”

The names of Alex, Patty and Randall are changed to protect their identities. All documents related to Alex’s description of ACC are available at this folder. Special thanks to organizers in the Seattle Democratic Socialists of America’s Housing Justice Working Group, who first notified the author of this story about Alex and Patty’s struggles with ACC.