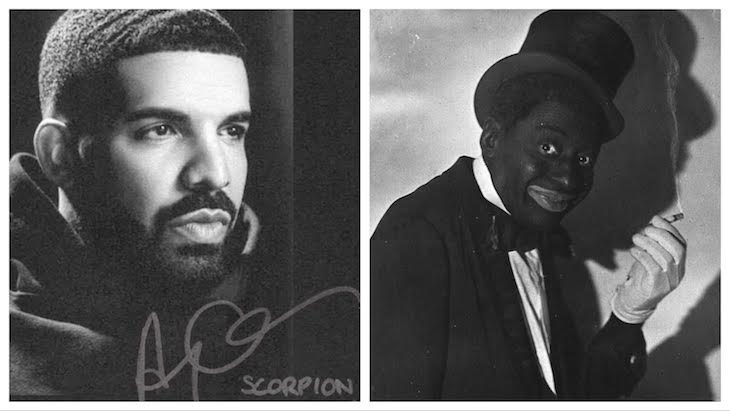 Imagine being Drake, the most recognizable Black man of mixed ancestry in America not named Barack Obama. A darker-skinned rival has just released photos of you in blackface from 2007 and outed you as the father of an out-of-wedlock child by a well-known (white) porn star in the weeks leading up to your album release. No small part of your value as an investment for Apple Music, among other corporate partners, comes from your resonance with your Black female fan base—a source of cultural capital you’ve leveraged in the music videos for “God’s Plan” and “Nice For What.” That revenue stream is suddenly at risk as you log on to Twitter one afternoon to see millions of people sharing images of your foray into minstrelsy.

You posed in blackface as a 20-year-old actor to make a point about how difficult it is for young Black actors to land roles that don’t dehumanize them; a decade later your attempt at social commentary is resurrected to make you look like a coon. So when you rap “I’m exhausted and drained, I can’t even pretend” on “Emotionless,” a song from your new double-album Scorpion, listeners can reasonably read racial stress into the lyric.

Critics often fail to examine Drake’s negotiation of the boundaries of Blackness. Which is a shame, because each release, including Scorpion, contains a collage of loaded racial codes that comment on the way race is lived in America. On “Survival” he’s a battle-tested rapper; on “March 14th” a sensitive single father; on “Nice For What” a champion of Black womxn’s empowerment, while the inviting chorus of “God’s Plan” sounds like a 21st-century Negro spiritual. By the end of the ride, we’re as deluded about who the “real” Drake is as we are about the elusive nature of Blackness. After a two-decade run in the public eye that has included a popular television drama, five #1 albums and dozens of chart-topping singles, nobody sounds more tired of the racial runaround than Drake himself. The moody monochrome cover of Scorpion conveys an inner malaise that Drake can’t quite shake over its 25 tracks.

Pinning down the famously moody Drake is tricky business. “My Mt. Rushmore is me with four different expressions,” he raps enigmatically on “Survival.” Black men in the public eye have historically had a limited number of racial scripts they can access to reach a wide/white audience. Most of these involve remaining emotionally elusive while projecting what sociologist Elijah Anderson called “[the] glossy exterior many Blacks display to negotiate white spaces as part of their daily lives” in his 2015 essay “The White Space.” Political pundits often conjecture that avuncular figures like Bill Cosby and Michael Jordan paved the way for the political rise of Obama. But Drake’s earliest ancestor is a little more ancient.

In the early 1900s, the multi-talented entertainer Bert Williams made a career out of code-switching, parlaying his success as a vaudevillian comedian into one of America’s first career recording artists. Anticipating Drake by a century, Williams was one of the first “crossover” acts in pop-culture history, succeeding as a Black minstrel performer in music, film and theatre simultaneously. The most enduring artifact of Williams’ talent remains his haunting card act routine, memorialized in the 1916 silent film A Natural Born Gambler. Performed in blackface, the two-minute pantomime is a parable about aspiration crashing repeatedly into disappointment; a method-acted microcosm of the battle for respect fought by postbellum Blacks at a time when the Ku Klux Klan controlled state legislatures across the country and Jim Crow’s reign of terror pervaded the American South.

Duke Ellington memorialized Williams’ melancholy in his 1940 song “Portrait of Bert Williams,” a composition based on Williams’ 1906 signature hit “Nobody.” “When life seems full of clouds and rain, and I’m filled with nothing and pain, who soothes my bumping brain?” Williams asks in the original. He answers himself: “Nobody.” Williams’ half-spoken/half-sung vocals are a sonic atavism of Drake’s contemporary style, eerily echoing his jazzy outro on “March 14th” both thematically and lyrically: “No one to guide me, I’m all alone,” Drake oozes. “No one to cry on, I need shelter from the rain.”

With America backsliding into a conservative reign that uses the issue of immigration to signal-boost white supremacy, the country is in a similar place today as it was in 1905. Drake the multi-millionaire seems aloof from this maelstrom, but his career is a metaphor for it. Socially marooned on an island of mixed-race identity, he’s too Black to escape “the problem of the color line” described by W.E.B. Du Bois in 1903, but not Black enough to receive the benefit of the doubt in a musical genre obsessed with authenticity.

Whether he’s reaching out to an ex (“Don’t Matter To Me”) or separating himself from his professional rivals (“Is There More”), Drake is at his lyrical best when luxuriating in loneliness. Evidenced on previous albums in the tracks “Furthest Thing” and “The Resistance,” this creative genius for conveying the liminal space between acceptance and alienation—between faith and philandering—is the musical manifestation of a life spent straddling the color line as a light-skinned Black man. “The sweeter the berry, the darker the juice,” he declares on “Is There More,” citing Wallace Thurman’s Harlem Renaissance-era novel about the complexities of colorism in the Black community.

Conversely, Drake is at his worst when he chases racial affirmation with clumsy gangsta-rap attempts like “I’m Upset” and “Nonstop.” When he claims “yeah I’m light-skinned, but I’m still a dark nigga,” you cringe; in addition to sounding silly, such appeals seek a grail of racial authenticity that we all know is an impossible and unnecessary fiction. In a country where it takes only “one drop” to be considered colored, setting up a competition between shades sheds little light.

The best representation of Drake’s racial reality on Scorpion comes on the song “Emotionless.” Backed by an effective Mariah Carey sample and chords culled from ‘90s R&B, Drake’s lyrics interrogate the fleeting loyalties and performative hijinks of everyone around him, including himself. Unimpressed with his self-constructed world as a well-assimilated Black man in a capitalist society where everything but a clear conscience has a price, Drake searches for a deeper source of self-acceptance, of soul, of solidarity with something bigger than himself. “Working in the land of the free, home of the brave,” he raps. “I gotta bring my brothers, or else I feel out of place.” On “Talk Up (feat. JAY Z),” Drake’s boyish boasts contrast with Jay’s grizzled rap-game-veteran schtick. The collaboration works because both hues of Black are allowed to shine. The way Drake folds the African American Vernacular English colloquialism you know what I’m sayin? into a catchy melodic fragment is the kind of obvious but ingenious verbal incision we’ve come to expect from him, and from Black musicians since time immemorial.

Engineered by producer Noah “40” Shebib to have its soundscapes play on headphones as well as they do on club speakers, Scorpion is a compulsively listenable album that’s also bloated and frustrating. Drake rarely matches its flawless production with the brief but piercing insights about self, society, race and relationships that he made more succinctly on 2013’s Nothing Was The Same. In his search to certify his racial authenticity, Drake has lost something much more important. Hopefully, it won’t take him another 25 songs to find it.