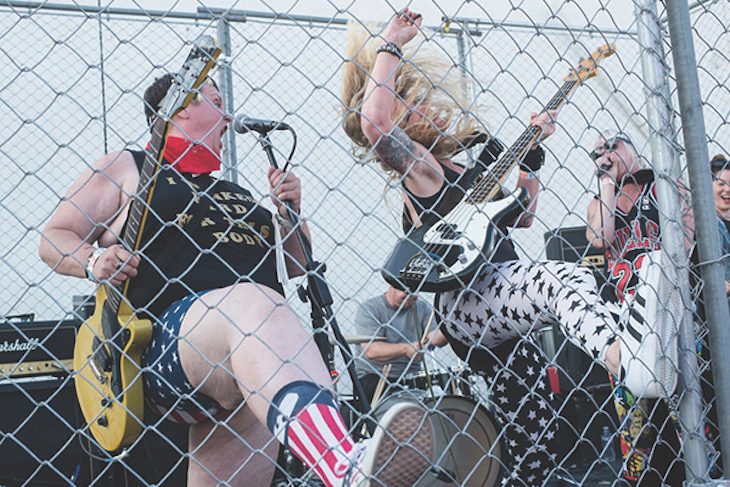 Daikaiju is Japanese for “giant monster,” and it’s an apt moniker for this Alabama instrumental band, whose two-fisted mutation of surf-rock DNA snarls and spits like Godzilla throwing a headlock on Ghidrah the Three-Headed Monster—in other words, ideal building-stomping monster-movie music. —Tony Kay
Highline

Historical re-enactors are fascinating—Who? What? Why?—and I’m fascinated to see playwright Holly Arsenault game the concept into the future. The Great Inconvenience launches us into the year 2050, as a group of historical re-enactors fulfills their duty of whitewashing American atrocities for audiences of wealthy kids. Directed by Erin Kraft, who also worked with Arsenault on 2013 hit Undo. Runs through Aug. 18. —Gemma Wilson
Annex Theatre

Glancing at the news every morning brings with it another excuse to get as sloshed as is humanly possible, and the Bad Things’ variety of cabaret music—sentimental, dark-humored and wonderfully catchy—is great for drowning (and wallowing in) your sorrows. —Tony Kay
Parliament Tavern

Stephanie Peirolo’s solo show Disclosure was born out of an incredible Moth story and resulting collaboration with New York-based director Maggie Cino. Simply put, it’s about harassment settlements and the attendant non-disclosure agreements that perpetuate the cycle by preventing women from sharing their experiences. More broadly, it investigates our goddam humanity and how we relate to one another (or should) as people. —Gemma Wilson
18th and Union

Last year there was blood. A lot of blood. Who knows what the wildmen of Stallion, current holders of the NWA Rock n Roll Heavyweight Championship belt, have tucked in their singlets this year? Count on over-the-top wrestling action, raunchy rock shenanigans and more beer flying than a fraternity house hazing party. Let’s get ready to rummmmmmbllllllle! —Dan Paulus
Randy’s Restaurant

Even as other sounds flourish (finally!) within Seattle’s music community, this city still does tried-and-true, heavy-duty rock ’n’ roll right. Among the luminaries is Sandrider, a steamroller trio comprised of rock-scene lifers who’ve managed to not only survive in a young person’s field but actually get better with age—and maintain a sense of humor. Tonight they celebrate their new LP Armada, which is the best thing they’ve ever done. —Jonathan Zwickel
Crocodile