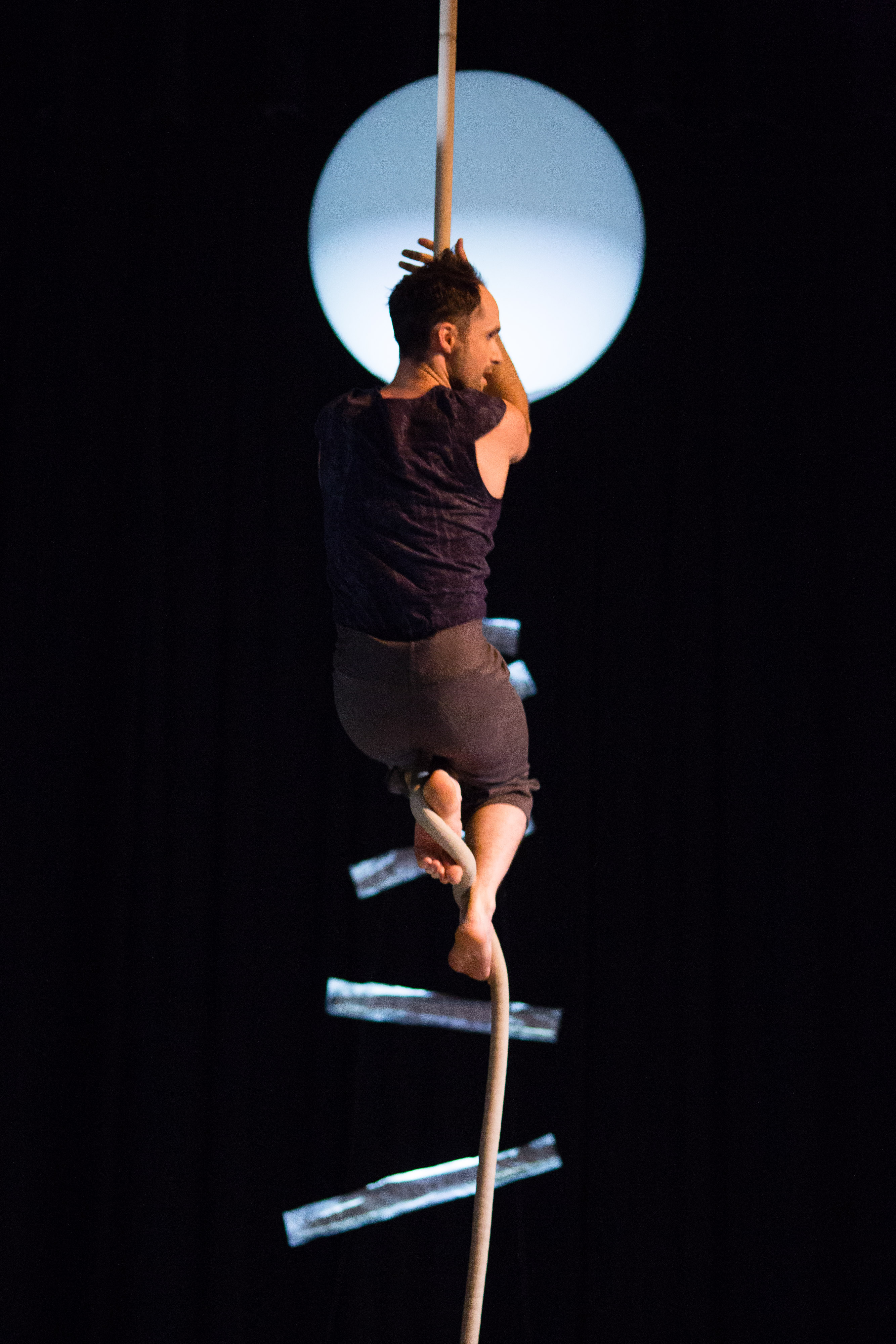 Since forming in 2012, Acrobatic Conundrum has been expanding the definition of the word circus, creating work that reaches far beyond virtuosic novelty acts and blending dance, theatre and circus arts into a storytelling language all their own. Now the company is premiering their most ambitious show to date: The Language of Chance. It’s a full-length show loosely inspired by the Jorge Luis Borges story The Library of Babel, set in a universe lined with books that are full of gibberish, and so, full of infinite meaning. To create the two-part work, Conundrum co-founder Terry Crane reached out to two very different creative voices. The first half, “A Book is Not a Ladder,” is created and directed by choreographer KT Niehoff; the second half, “Secret Passages,” by UMO Ensemble director Elizabeth Klob. We chatted with Crane about how these two voices are adding to Acrobatic Conundrum and why he can’t stop recruiting artists into the circus.

What inspired you to work with this Borges story?
There’s something really visual about the story that has always captured my imagination—that meaning is there, but it’s so hard to find that you might spend your whole life looking for it. Circus is this interesting medium, because it doesn’t always lend itself to storytelling but there’s something very expressive about it. Sometimes that’s intrinsic to the danger and prowess elements, but we’re at this interesting time with contemporary circus where lot of new things being tried and people are working with storytelling, so we wanted to put that in a really interesting world, and the Borges story is so special that way, so otherworldly.

How did you choose KT Niehoff and Elizabeth Klob as collaborators?
For our show The Way Out I actually stepped out to direct, but I feel like my main asset is as a performer so I was looking for directors. Contemporary circus is this amazing, powerful tool, but I kept thinking that there are no circus directors in the US who are doing what I want to do. I saw KT perform at Oberlin a few years ago and I sent her a Hail Mary email just pouring out my heart saying, ‘I love your work. If you ever want to work with a circus, let me know.’  She got back to me the next day and just said “Hey. You look pretty cool. We should work together.” Elizabeth and I also just met this year when she hired me to work with UMO Ensemble in the piece they did for the Beckett Festival, Fail Better. I enjoyed that a lot and I was like ‘Hey, you should come direct a piece for us.’

What appealed to you about their styles?
With KT, I love the virtuosic dance and how intricate the choreography is, how precise. She’s really so much more than a choreographer, she tries to create a whole atmosphere with her pieces, with attention to costume and set and music and singing. When she came to Oberlin she did this awesome duet; I was just blown away by the quality of partnering, and how she combined rock ‘n’ roll moves with such intricate choreography.

Elizabeth is kind of preoccupied with some of the same questions as me, thinking about how you can create visual and kinesthetic games with different apparatuses that really tell a story. Like in Fail Better, we had this big teeter-totter on stage, and we played with that in really theatrical ways. Creating visual puzzles or games like that is something that’s really exciting for me, and what we’ve played with a bunch in Conundrum.

How have the collaborations been different or similar?
They’ve been really, really different. Elizabeth was very story driven. She and I got together and rolled out a big piece of paper and put all these little sticky notes on the page and really tried to build a story arc. KT is much more intuitive. We generated a lot of material through improvisation and conversation, and then as she saw each piece she’d have an instinct about what came next. It feels like we have a poetry story and a prose story.

You’re like a circus-directing evangelist now, recruiting people to your cause! What are you looking in a director?
I know, I do go around looking at people’s work and wondering what they would do with circus performers. There are so many different kinds of shows that appeal to me, but I get annoyed with shows that are too literal, like circus shows that try and justify everything you see in a story. Ultimately it is circus and somebody’s climbing up on a trapeze, they aren’t climbing up to pick an apple off of a tree of whatever. So I like shows that have an honesty about what they’re doing, and letting the story come from the circus, rather that being grafted on to it. It’s a balance of literal and abstraction.

The Language of Chance runs through Feb. 8. Photo of Terry Crane by John Cornicello.