Sometimes a single song can redefine a band’s entire MO. Such is the case with “We Will Not Despair,” the title song from the new album by Breaks and Swells, which we’re psyched to premiere today. With that title as the song’s endlessly singalongable chorus—and the album’s mission statement—the neo-soul septet debuts a unique sound while also embracing the traditional role of soul music as a spiritual balm for the masses. Even as other numbers on We Will Not Despair turn to more standard matters of the heart, the titular phrase illuminates the whole album with a clear and joyful light, a ray of solidarity in dark times.

Most of these nine songs turn on lead singer Marquetta Miller’s sparkling voice, a robust and versatile instrument that she wields with equal parts confidence to vulnerability. She’s backed by a knockout-punching backing band, including a pair of horns, keys, guitar and an elastic rhythm section. The album’s two instrumentals are further highlights, the crew stretching out into cosmic soul and Funkadelic-like party jams. Though Breaks and Swells has been playing around town and releasing singles since 2014, this is their first official LP, marking a powerful addition to Seattle’s perpetually underrated soul scene.

I caught up with Miller on the phone a week ago while she was in her native Alaska visiting her parents. We talked about the new album, Seattle’s tight-knit soul community and her guest appearance on the upcoming Sub Pop release by Knife Knights, the new duo of Ishmael Butler and Erik Blood, the latter of whom produced We Will Not Despair. 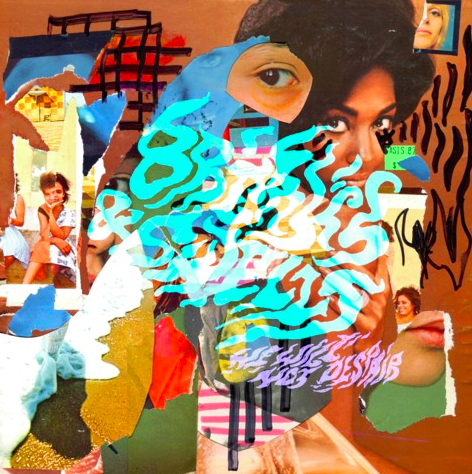 City Arts: This album is a clear statement of your talents and seems like a new, defining chapter for the band.
Marquetta Miller: Absolutely. We went through a couple lineup changes. We spent a solid year not really writing because we were trying to get someone up to speed to play. By the time we settled in with Brice [Ervin, bassist] there was all this stuff pent up, and we’ve been working together so long it was pretty easy. We wrote that record in five months and that’s the most songs we’ve written in that short period of time. The process changes: Every song except “Don’t Lose Hold” was workshopped together. Someone would have a riff and we’d hang out and jam and I’d figure out a melody and start writing lyrics. Previously Dylon [Tubb, guitarist] or I would come in with a song mostly finished and we’d work on arrangements and parts from there. Letting it be more creative and ephemeral opened us up. When you come in with a fully formed idea of your own, you get touchy about what other people wanna do with it. The collaborative songwriting helps soothe some egos because it’s everybody’s song.

I also think we’ve pulled back from the idea of being a throwback or traditional soul band and are trying to pull more pop influences. There’s a more modern approach in the newer songs, alternative soul or indie soul, and that’s where we feel more comfortable.

Makes sense that you started with a more traditional sound. You gotta know the rules before you break ‘em.
Yeah. When we first started playing Sharon Jones was becoming huge, Lee Fields, Charles Bradley. There were a lot of younger people who wanted to approach that sound. But it’s so obvious when it’s a pastiche, like, “I’m gonna take this recognizable song and break it down and make it different.” It’s gotta be really different. I like Leon Bridges, I like his voice, but his first record sounds like Otis Redding is bored. I wanna see him break out and really go further than Otis Redding lite. A lot of people are getting there. Everyone loves soul music, everyone is familiar with those songs, and to take it and make it yours is kinda scary.

There’s so much good soul and funk music in this city that gets overshadowed by our rock ‘n’ roll legacy.
That’s obviously something we talk about a lot with other bands in the scene. People don’t realize how many talented soul and funk bands there are in Seattle. I notice the difference if we play at Nectar or the Tractor—those shows are always sold out. It’s not our friends, but people are like, “This is our fourth time seeing you!” and that’s awesome. Capitol Hill is more aloof—we play Neumos and Barboza a lot because we have a good relationship with those guys but that’s not necessarily the case with a lot of other bands in this scene, so we try to tap someone who hasn’t gotten a chance to play there before and get them in with us. We played a fun show with High Pulp a year ago and now they’re opening for Industrial Revelation. I’m really excited for that band—they remind me of Bad Bad Not Good, they’re high-energy they have great taste and their arrangements are popping. Being an instrumental band is kinda hard.

In all sincerity, the phrase “We Will Not Despair” has kept me afloat during the shitstorm of the last couple weeks. Thank you for putting those words together and putting them into an unforgettable song.
It’s funny because I can’t even remember when that part of that hook popped up. I started writing that song as a love song, and those first two lines, “Your voice goes bouncing around inside my head…” that was the first chunk of lyrics I had. And the song was done arrangement-wise, so I was trying to figure out what to do with the music. It wasn’t speaking to me as a love song. And I started thinking about what I had been doing: I was at home getting stoned reading Politico and Slate and just, like, crying. Post-election was a really rough time obviously for everyone but we talked about it in practice a lot—everyone was in shock and afraid. And it was obvious from January that this was something we’d have to be diligent about because bad things were about to start happening. I realized all these feelings were about an obsessive relationship, but instead of about a boy it’s about this terrible stuff happening, and what can we do? At the end of the day as long as were in this together we might make it.

That song was cathartic to write. It’s like, there’s a game plan, there are things we can all do together to fight this and stop this and protect people. I think the thing I struggled with the most and I like the line, but is it too much? There’s the big dropout and it goes, “What they say about rope? Give ‘em enough and they’ll choke,” and I was like I don’t know if I can say that but I did and I feel good about it.

The new Knife Knights project is still super fresh—there’s only that one song so far—but seems like a very cool thing to be involved in.
That’s one of those things I still can’t really process that that’s happening. I mean, I remember being like 8 or 9 and seeing the videos for “Rebirth of Slick” and “Where I’m From” and being like what is this, jazz music with rapping? It blew my mind. I’ve met Ish before—he and Tendai hung out a Liberty [the Capitol Hill bar where Miller and Tubb worked and met] a lot—but it was crazy being in the studio with him. Like, you’re rap royalty. And you want me to sing on your songs? Erik sent me the whole record the other day and it’s awesome. It’s been pretty secretive. Bumbershoot is coming up and we’re playing on Saturday, which will be interesting because I don’t think any of us have been in the same room at the same time. The record comes out on Sub Pop in September and that’s exactly 13 years from when I moved here. If you’d told me that was gonna happen I don’t know if I would’ve believed it. The Seattle music scene has been good to me!

And now we present the premiere of We Will Not Despair, the debut album by Breaks and Swells. See the band play a free show this Saturday, July 7 at Waterfront Park alongside Stas Thee Boss & Nappy Nina, Misundvrstood & Gypsy Temple and OCNotes.