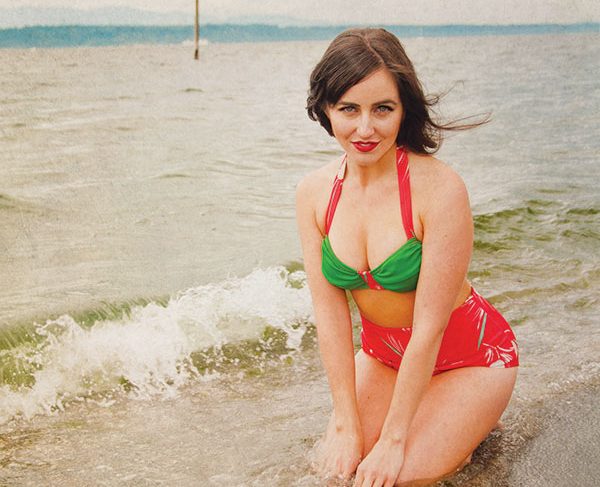 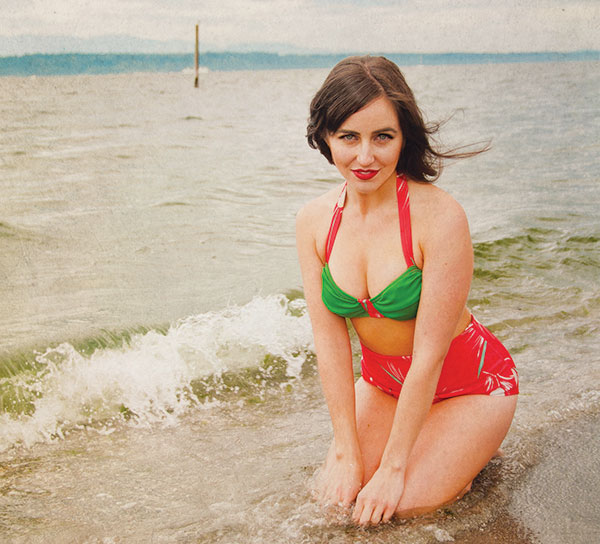 Muumuus get a bad fashion rap as the garish, shapeless housedresses of yore, but designer Angela Holstrom can turn even the frumpiest frocks into summer fashion miracles. We’re standing in her north Seattle home studio, surrounded on two sides by rolls of bright, lively fabric, arranged floor-to-ceiling in cubbies of controlled, color-coordinated chaos. Digging in a bag from under a worktable, the woman behind clothing line Frankie Four pulls out one of her signature swimsuits—a ’50s-inspired number with a high-waisted bottom and gathered halter top—and its muumuu origins have been rendered unrecognizable. And totally adorable.

Holstrom started hoarding (her word) vintage fabrics while thrift shopping in high school, drawn as she was to the retro looks she found flattering on her body. She learned to sew in the apparel design program at Seattle Pacific University; her aim was to be a costume designer, but the theatre world’s small budgets were limiting. For one project she was tasked with designing costumes for four period characters with $50 and decided to hand-make a tie to save money. Her now-husband, Jason Holstrom of United State of Electronica, wore the tie on stage. Soon she was supplying ties to many men in the local music scene and her design career was born.

Holstrom made her first bathing suit for her honeymoon. “I had a lot of vintage bathing suits,” she says, “but those don’t hold up so well. Either the fabric is really worn or the elastic is totally shot, plus they sometimes have really uncomfortable zippers and things. So I decided to make one myself out of more comfortable fabric.”

That original style—a low-rise ’60s-feeling bikini she calls the Gidget—grew to include the ’50s bikini and two one-pieces, a ’50s pinup style with a small skirted bottom and a ’70s low-backed halter. Seven years later, she uses both modern and vintage fabric and is still hand-making each one-of-a-kind suit.

On the opposite end of the Seattle swimsuit spectrum is Drifting Arrows, a line as timeless as Frankie Four is retro. Designer Leah Lawrence moved from Seattle to Hawaii with her family before high school and beachwear became a part of her everyday life.

“I want my swimwear to be as special as the clothing you wear the rest of the time,” Lawrence says. “I like that you can throw a pair of shorts over a suit, or a little strappy dress, and incorporate it in your daily outfit.” Lawrence, who lives in Seattle but spends a lot of time on Maui, launched her line in 2012 with two bikinis and two one-piece suits—classic shapes mixed with interesting detailing, like a suspender back on a plunging maillot or decorative ties capped with matte gold aglets. Her suits are made from matte fabrics sourced from Italy, then cut and sewn in a small, indepen-dent factory in South Seattle.