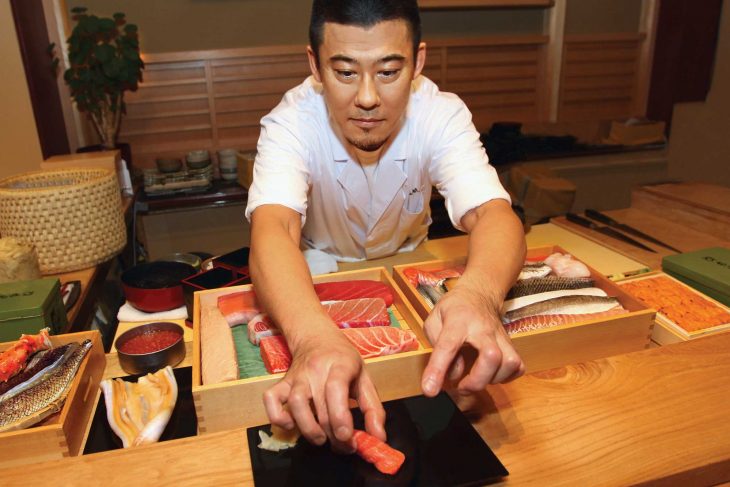 On the rare nights that a spot is open at the bar for Chef Kotaro Kumita’s omakase tasting menu at Sushi Wataru, I scan my calendar, hoping I have the day off work—from serving at Sushi Wataru. Kumita opened the restaurant in late 2015 and now a seat at the bar must be reserved more than a month out. The tranquil atmosphere coupled with heavenly slabs of fish make it my favorite place to spend a two-hour dinner.

I stumbled into the serving position a few weeks after moving back to Seattle from Jerusalem, and quickly realized two things. The first was that the best sushi in Seattle is being served in a small retail space on the bottom floor of an apartment building in Ravenna, next to a gas station and across from a retirement home. The second is that Kumita is one of the hardest-working men in the city.

He arrives at 10 a.m. every morning and sets to work, smoking albacore, black seabream and king mackerel over straw he imports from Japan; making his own kelp-infused soy sauce and breaking down massive sections of tuna into smaller blocks from which he cuts pieces for sushi and sashimi. Before service begins at 5, he’ll sit down for 10 minutes, eat something prepared by his wife, Miho, who handles kitchen duties once the restaurant is open, chug a pint glass of green tea and then begin the first of his two nightly omakase dinners, in which he prepares some two dozen pieces of sushi for the handful of lucky diners gathered around his bar.

Some items essential to a traditional sushi meal aren’t native to the Pacific Northwest. Bluefin tuna, often farmed due to sustainability concerns, is flown in from Turkey and Malta; sea urchin comes from Maine and octopus from South Africa because Kumita believes the local options are, respectively, bitter and tough. All the whitefishes at the restaurant—the threadfin bream, golden-eye snapper, flounder, sea robin, grunt, black seabream and more—are flown in daily on ANA Airways flights from the gigantic Tsukiji Fish Market in Tokyo, where Kumita has a buyer. Every so often Kumita FaceTimes with him, checking the clarity of the fishes’ eyes, the redness of their gills, how fat their bellies are, from 5,000 miles away.

As customers nibble on their appetizers, Kumita slices fish in front of them, allowing the oils and flavors to emerge as the cuts warm to room temperature. He assembles nigiri with sushi rice, a dab of wasabi and a brush of nikiri soy sauce—his house-made mixture that includes sake, bonito flakes and kelp. Lighter than regular soy sauce, it causes each piece of fish to glisten against the black enamel geta plate on which it’s served.

Many times I’ve heard Kumita tell customers that sushi in the United States is moving in the wrong direction—toward California rolls, spicy tuna or some other creation that involves mayonnaise, vegetables and subpar fish. Kumita embraces the Japanese approach: Sushi is not the “crazy rolls” American diners are so fond of. Sushi is simplicity.

“As a Japanese person, sushi is our culture,” Kumita told me on a recent Monday, when the restaurant was closed. He was there making tamago, a sweet egg omelet traditionally served at the end of a meal, for the week ahead. “We need to keep our tradition. We need to show what’s going on in Japan.” Traditional sushi is alive and well in the country where it was created, and diners there are taken with it. Not so in Kumita’s adopted home.

Kumita moved to Seattle in 1991, when he was 18 years old, to study English at Seattle Central Community College, and worked to pay his way as a dishwasher at Hana Restaurant on Broadway, which was then owned by Seattle sushi icon Shiro Kashiba. Little by little, from watching the chefs at Hana, he learned the fundamentals of Japanese cuisine, like marinating fish zuke-style and making dashi stock from kelp and dried bonito flakes, traditional techniques he says new chefs no longer study.

When he was 23, he was introduced to Kashiba, who himself moved to Seattle from Japan in 1966 and went on to open a handful of acclaimed restaurants in Seattle including Maneki, Shiro’s and most recently Sushi Kashiba in Pike Place Market. (Kashiba has dined at Wataru twice, Kumita says proudly. “He checked all the marinated stuff, the mackerel and the shad. He took a piece of the tamago home, so I thought that was a good sign.”) After a decade of working for Kashiba, a three-year period in Tokyo as a kappo chef,
and 26 years total in the Japanese restaurant industry, including stints at Shiro’s, Maneki, Mashiko and Moshi Moshi, Kumita decided it was time to open his own place. His decision was helped along by Kashiba—and another sushi master.

“I knew I wanted to open a restaurant right after I met Jiro-san in Tokyo,” he says, referring to Jiro Ono, the three-Michelin star sushi chef and subject of the 2011 documentary Jiro Dreams of Sushi. When Kumita was working at a restaurant in Tokyo in the early ’00s, Kashiba came to visit and brought him to Jiro’s eponymous restaurant. Back then Jiro was far less famous, he says—“some old guy!” And though he was on break, Jiro-san made sushi for Shiro-san, who it turned out had apprenticed for him decades earlier. Kumita was impressed by Shiro’s obvious deference for Jiro.

“Shiro-san acted like a little kid, you know? ‘Yes, sir, no, sir’ to Jiro-san,” Kumita says. He exhibits the same respect with his former boss, who he always refers to with the honorific “Shiro-san.”

Some restaurant owners measure success by the number of reservations or Yelp stars their place receives. Kumita looks at it differently: His efforts to spread knowledge about traditional Japanese cuisine are working.

“Nowadays, people have started to understand the differences between whitefish,” he says. “Ten or 15 years ago, people didn’t enjoy whitefish much. [There’s] not much flavor, people would think. Flounder, snapper, it’s the same. But there are so many different whitefish in Japan. It’s of course similar, but to us it’s all different flavors.”

The best part of Kumita’s workday isn’t when the customers have left and he can finally go home. It comes much earlier. “Every morning when we get fresh fish, that’s my favorite. Checking the fish faces. They’re my babies! I like that part.”