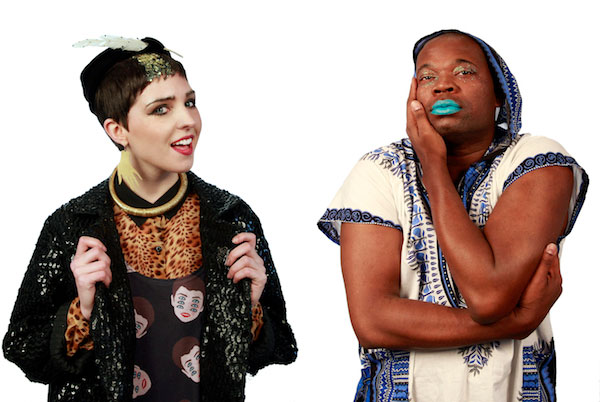 Genre Bender 2017 is right around the corner and after months of dreaming and creating, this year’s five pairs of artists are hard at work on their cross-disciplinary performances. Among this year’s collaborators are dancer/choreographer Dani Tirrell and visual artist Mary Anne Carter. Shield your eyes: Who knew that glitter could be so seditious?

Tirrell and Carter generally work in very different modes. Tirrell is an accomplished modern choreographer and a beacon of the local underground vogue scene (check him out in Sweet T: The Physical Album, running now at Gay City). Carter is a lit-leaning visual artist known for her cheeky, political fashion line (you’ve being seeing her face everywhere on this month’s cover). Both are fearless and unfailing in their commitment to self-expression and the constant expansion of their creative practices.

Two of the artists’ initial influences were Kenneth Anger’s 1963 pop-scored, queer-heavy experimental short film Scorpio Rising and, of course, “glitter as a deity,” as Carter puts it. Also high on the list of influences: the music of Black girl groups from ’50s and ’60s. “Our piece is about how our bodies are erased or easily replaced—especially women,” Tirrell says.

“We’re going to play with the arbitrary nature of ‘normalcy,’” Carter says of their hybrid creation. In early conversations about their piece, the pair talked about how the rules for what is “normal” are created by one very small group of people and projected around the world as a superficial gold standard that leads to hierarchies within subcultures. “In queer culture,” Carter says, “there’s still a lot of emulation of white cis heteronormative culture.”

Both Tirrell and Carter are excited to challenge themselves in their collaboration. Carter isn’t typically a performer and she’ll be joining Tirrell on stage; Tirrell doesn’t often use humor in his work, but he’s leaning into it for this new piece.

Join Carter and Tirrell in their subversive pop experiment at the Langston Hughes Performing Arts Institute for three performances only, Friday, March 3 through Sunday, March 5. Get your tickets here!