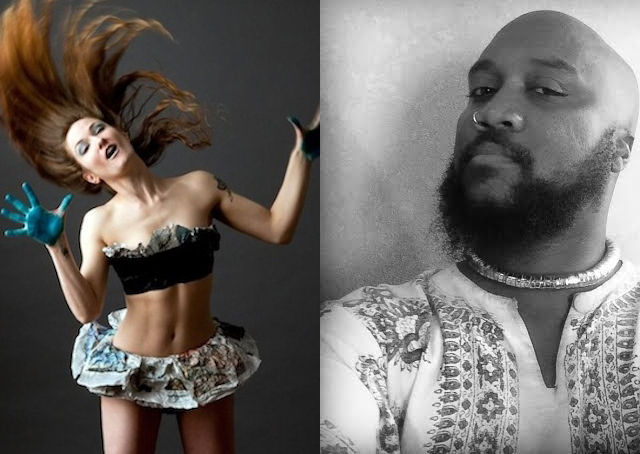 Lara Paxton and okanomodé share a talent for mixing grandeur with intimacy, spectacle with emotion. Both command attention with magnetic stage presence and dazzling skill. Both profess a keen interest in what Paxton recently called “gospel, religion and witchy-poo stuff.” They’re a natural match.

okanomodé is a vocalist, composer, poet and dancer. He blew away audiences at On the Boards last December with his transcendent vocal performance in Ahamefule J. Oluo’s Now I’m Fine, for which he wrote the lyrics. In January, okanomodé participated in a partially improvised, partially composed original opera based on the story of Ishtar, created by some of the most compelling figures in Seattle jazz. He’s been a dazzling fixture in the city’s music scene for more than a decade, lending his angelic pipes to various jazz, funk and soul outfits.

As a co-founder of Circus Contraption and the Aerialistas, Lara Paxton is a pioneer in Seattle’s circus community. She’s also a circus teacher, choreographer and solo artist who performs feats of strength and beauty suspended on aerial hoops, trapezes or corde lisse (big, fancy circus ropes). Paxton is a regular as the annual Moisture Festival and performs often around town—we recently caught her at Future Fridays’ album release show at FRED Wildlife Refuge—and as far away as Germany and Spain.

So what to expect from their Genre Bender 2015 performance? The surprise is bound to be epic.

Paxton and okanomodé stage their work for two nights only Friday, March 6 and Saturday, March 7 at Cornish Playhouse at Seattle Center. Advance tickets are $20, but they’re $30 at the door. Join us Saturday night and stick around for an after-party with music from DJ Topspin.