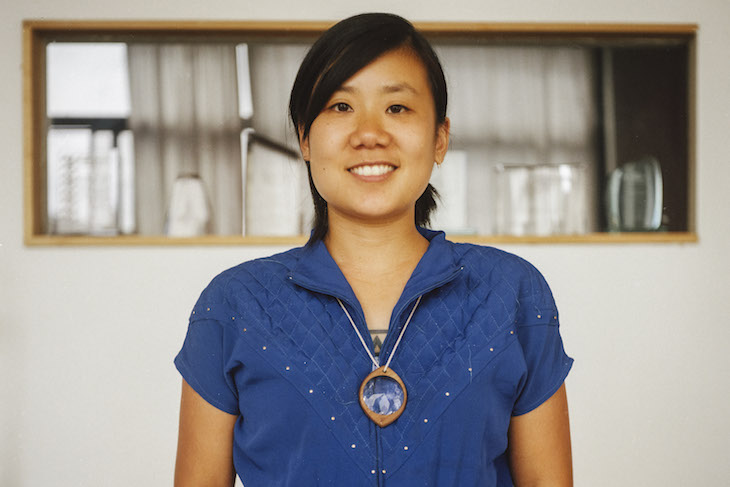 “Vivian was largely responsible for rethinking the organization’s visual identity, and she has a comprehensive perspective when it comes to developing programs with community members, and doing outreach in meaningful ways,” Sheehan says. “I could not feel more happy, comfortable and confident in her capabilities.”

Sudeshna Sen, president of the Forum’s board of directors, says the selection process to find the organization’s new ED began around June and the hiring committee interviewed several dozen qualified candidates. “One thing that made Vivian stand out, besides her list of qualifications,” Sen says, “was how committed she was to continuing the Film Forum’s ongoing work towards not just representation, but equitable representation of all community members. That resonated with me as a woman of color.”

Prior to joining NWFF in 2017, Hua served as communications manager for ICANNWiki, a nonprofit dedicated to global issues in internet governance. She spent a decade-plus as the graphic designer for the University of Washington’s Experimental Education Unit. In 2004, she founded REDEFINE, a socially conscious, long-form music and arts publication. More recently, she directed Searching Skies, a narrative short film that premiered during the Seattle leg of The Seventh Art Stand, a national civil rights film and discussion series that Hua co-founded with NWFF and film distributor Abramorama in response to Trump’s first travel ban.

“When I first met her working on the Seventh Art Stand, I was struck by Vivian’s ability to think on multiple levels about creating and scaling a community space and a community-centered program for the Northwest Film Forum,” Sheehan says. “Vivian really took Seventh Art Stand to a much broader community engagement place. She was the reason a lot of the venues turned their events into fundraisers for immigrants and she was responsible for getting unconventional venues like schools and churches on board.”

NWFF has evolved considerably since filmmakers Jamie Hook and Deborah Girdwood started it in 1995. Initially a collective designed to help fellow filmmakers with the complexities of post-production, today NWFF is a training ground for burgeoning artists as well as a showcase for eclectic and locally focused film programming.

Sheehan’s hiring as NWFF’s programming director in 2013 signaled a sea change for the organization. In that role, she programmed films for the calendar and assisted in the development of some of the organization’s most outside-the-box presentations, including Puget Soundtracks (a monthly series in which local musicians improvise original scores for classic and current films), multidisciplinary projects like the theatrical/dance presentation PALMS, and the satirical game show The Future is 0.

When she became the organization’s artistic director in 2015, Sheehan steered the Forum toward a more prominent role as a community sounding board. When managing director Line Sandsmark left the organization that year, the artistic and managing director roles were consolidated into an executive director position. Sheehan became executive director in 2016, overseeing NWFF’s artistic content and community outreach, and spearheading several facility renovations including expansion of the theater lobby and installation of a new box office.

In the wake of Sheehan’s exit, the positions of managing director and artistic director will be split once more. Hua will oversee the organization’s strategic direction and vision while managing director Christopher Day will oversee finances, systems and fiscal sponsorship program. Former community programmer Rana San was appointed artistic director in August and will assume curatorial responsibilities for the organization.

Sheehan passes the executive director’s baton to Hua as the Forum enjoys one of the most successful stretches of its existence. The NWFF saw a 25 percent increase in its earned and contributed income in the 2016–2017 fiscal year as well as a 25 percent leap in attendance.

“Over the past few years, Northwest Film Forum has evolved its artistic and curatorial vision through creative community partnerships and a willingness to experiment boldly,” Hua says. “I am honored to build upon this foundation and lead the organization into our exciting next chapter. At a time when many deeply entrenched systems are being scrutinized and dismantled for their oppressive biases, NWFF is well-positioned to explore new ways to co-create programs with the communities we serve, while elevating the many people and projects that have historically been denied access from sharing their stories.”

Hua will officially begin her new role on Oct. 11, upon the formal conclusion of Sheehan’s five-year tenure at NWFF. This Thursday, Sept. 27, Sheehan symbolically passes the torch to Hua during a public event, 2 Weeks Notice, a party and “farewell fund-rager” at Fred Wildlife Refuge from 7–11 p.m.