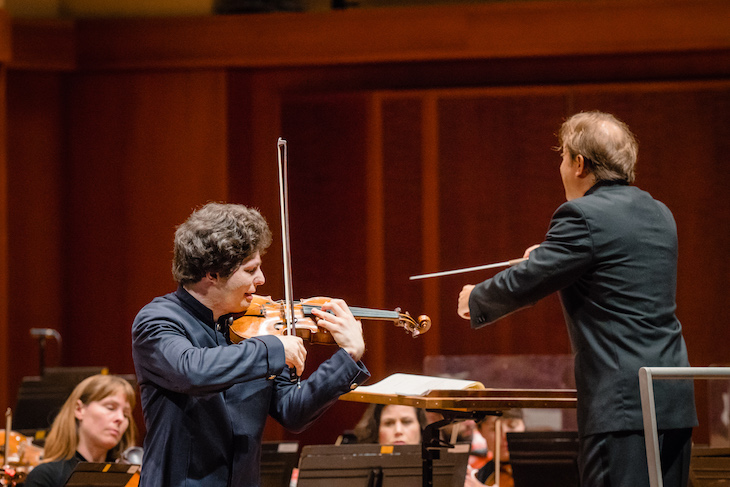 The regular Seattle Symphony season began at Benaroya Hall on Thursday night with a work by Debussy, on whose music director Ludovic Morlot is focusing all season, another from the same era by Janacek and Beethoven’s great Violin Concerto with Augustin Hadelich as soloist.

Following the canned announcement to “turn off all cell phones before listening to the Gramophone Orchestra of the Year,” the audience erupted into prolonged applause, as it did for new concertmaster, Noah Geller, and for Morlot himself.

“Gigues” and “Rondes de Printemps,” the first and third parts of Debussy’s Images (the second was omitted from this program), are quintessential, unmistakable Debussy, particularly the beginning of “Gigues” with its solo flute and harp glissades. But “Gigues” is also unusual for Debussy’s prominent use of the oboe d’amore, the alto oboe, played with smooth and subtle shading by the orchestra’s principal oboe, Mary Lynch. The piece is supposed to suggest a rustic England, with easily recognizable (to this Britisher) folk tunes, while “Rondes” does the same for France, and both have jaunty, danceable rhythms along with Debussy’s hallmark swirling feel in the music. Morlot brought out the tracery of Debussy’s harmonies in its orchestral layers and timbral colors.

Janacek is also a master of colors, and in the Suite from his opera The Cunning Little Vixen, arranged by Vaclav Talich, there is a real sense of being outdoors, filled as it is with what might be bird calls and alarms, and at one point it seemed to be a quiet somber nighttime in the forest. The piece calls for many solos and duets from bubbling flute, piccolo, very soft violins, harp, clarinet and viola, playful oboe and clashing cymbals, often in conversations with each other, but it all served to show off the orchestra’s many fine instrumentalists as the piece rose to an exuberant final climax.

Hadelich and Morlot were in perfect accord as they approached to Beethoven’s Violin Concerto, interpreted, it seemed, not as a full-on romantic concerto but a bridge between the classical and romantic eras. Theirs was very much a less-is-more way of playing it, and the result was elegant while also bringing out all the concerto’s varied moods. This was clear from the start, when the timpani (with the new timpanist James Benoit) alternates with just the winds, before the strings come in and in the long introduction before the solo violin enters. The sense was one of tender, nuanced playing, which Hadelich then continued with an exquisite performance, every note singing with bell-like clarity, often very softly. Yet, when required, he gave plenty of sound and energy, without ever digging into his violin or creating a harsh scratch.  Morlot and the orchestra were completely with him so that each note could be heard, no matter how slight.

While no-holds-barred performances of sound and speed always delight the audience, this kind of performance does, too. The orchestra’s and Hadelich’s performances were praised with not just applause but a lengthy swell of cheers and bravos. Hadelich responded with an encore of one of those technically virtuosic pieces, Paganini’s Caprice No. 24, which he tossed off with lightness and apparent total ease.

The program is repeated Saturday night and Sunday afternoon.