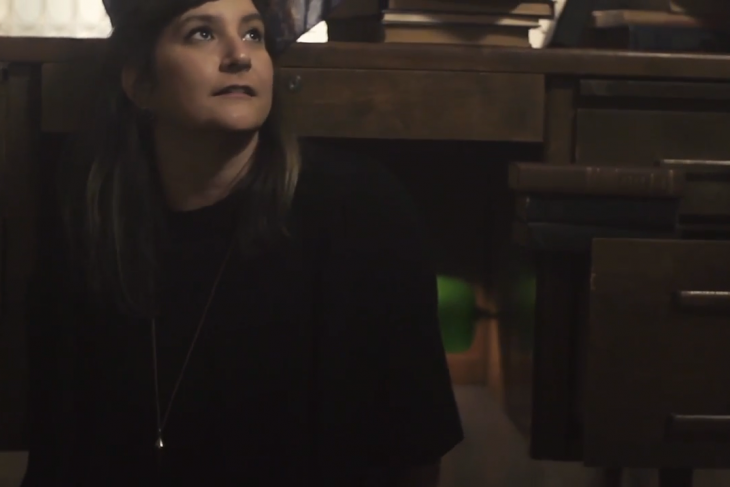 Whether in her folk-pop band Inly or solo during her October performance opening for Lena Dunham on the Seattle stop of her book tour, Mindie Lind’s beautiful, misty voice shines. City Arts named her one of our 2014 Artists of the Year and she’s just released a video for her song “Hungry and Fed,” written and directed by cinematographer Ryan Jorgensen. (The video is one of several local entrants in NPR’s Tiny Desk Concert contest, along with other Seattle favorites Prom Queen and Ayron Jones.)

We chatted with Lind about the new video, cripp culture, Lena Dunham and more.

There’s a moment in the video for “Hungry and Fed” where a set of scales are literarily tipped. Is that significant?
We were lucky enough to record the video at Purlieu Hall, this really special artist club in Pioneer Square that has the most wonderfully whimsical aesthetic. It’s like an old-world library with the kind of style and sophistication that reminds me of cigar boxes and Walt Whitman. It’s a stunning and special place. Anyway, they let us borrow the space for the day. So I wish I could say there was more significance to the scale tipping, but really, I was trying to play with and consider all of the neat stuff.

As far as the video structure goes, I’m building my way to the top of this desk that’s just so tall, and when I make it, the scale tips, so there’s probably some kind of symbolism there I might not have realized.

This song isn’t on the Inly EP—is it new? What has your writing process been since putting out that record?
“Hungry and Fed” is new. My writing process hasn’t changed too much since the EP. Just me and the keyboard, hitting and missing as much as I can. It’s about to change though, because Inly recently called it quits. I love those guys in the band—they’re lifelong buds and I learned a great deal about being in a band and making songs with other players. Great players. Kieran and Todd have one of the best bands in town with Corespondents and Jack just has the best instincts and a remarkable style. I have some exciting stuff coming up as well! So it’s all a fun time for me, songwriting-wise.

I’d like the new stuff coming out to be video-centric. I have this song and eight to 10 others that I’d like to use as an opportunity to keep working with Ryan Jorgensen. He did the video for “Hungry and Fed” and all our other videos and I wanna work with him as much as possible. He’s a freakin’ magician. He gives all this new life to the songs. He and his partner Sofia are a complete pleasure to make art with. They just get cripp visibility in a way that we never have to talk about.

Do you have any plans for those songs?
The plan is to make a record in 2015 and use the songs to reach one of my bigger goals and responsibilities of giving as much as I can to cripp visibility in the media.

How are you going about that, other than your videos?
I’ve got a few “Insider Conversations” coming up similar to the one I did with John Hockenberry back in November. I’m out of my mind about the one I just did with Mat Fraser, who’s on American Horror Story and a total badass. He’s a deep vessel of knowledge when it comes to this stuff because he’s been a cripp actor for over 20 years and he’s just now getting a break on American TV. It’s playing a freak in the freak show, which in some ways is completely radical and in other ways totally not. With articles like that one in The Guardian last week and pop stars like Viktoria Modesta gaining real traction, it’s an exciting time to have these conversations between artists about cripp visibility.

Speaking of celebrities, have you kept in touch with Lena Dunham since last fall?
Yeah, we’ve tossed a few notes back and forth, mostly saying “I think you are sparkly star” and then “No, you’re a sparkly star!” It’s pretty adorable.

This video is for the Tiny Desk Concert competition. What would it mean to win the contest?
The competition is completely steep—there are like thousands of videos that’ve been submitted—so winning would mean the world. But the idea of Reggie Watts looking at something with my name on it seems cool. As far as desk size goes, I’m a pretty tiny person—2 feet 10 inches to be exact! So desk-wise, the tinier the better.