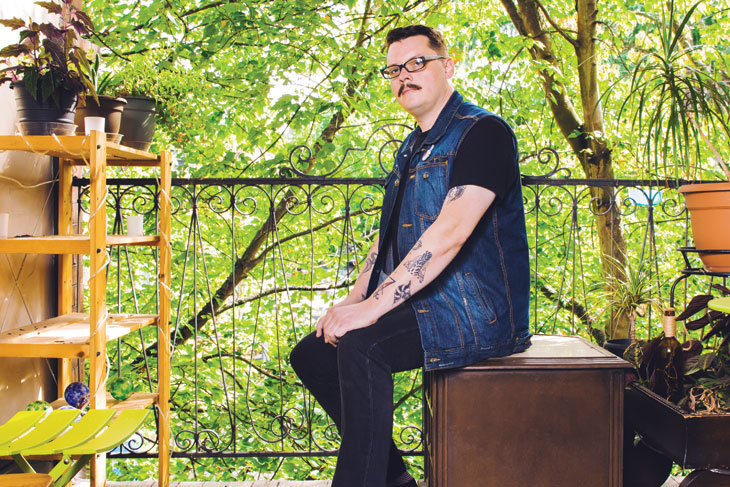 WHO Vi Tranchemontagne, the 38-year-old promoter, event coordinator and founder of Vitra Booking. Born in Nashua, N.H., the New Englander moved to Seattle in 2002 “mainly for the rain and the adventure.” He’s gone on to work as director of operations at Fred Wildlife Refuge, programming coordinator for Lit Crawl Seattle and is owner at Vitra Booking, which currently handles DJ and event programming for venues such as Corvus & Co. and Revolver Bar.

THE LOOK “Simple, sharp. I only shop thrift stores. I’m happiest in layers, jackets and scarves, which is why I love autumn and winter. Layers because I like to be hidden; the accessories because I like to be noticed—classic introvert/extrovert vibe. In the summer I like to keep it easy and comfy with slim jeans and a denim vest.”

ICONS “Leonard Cohen is my sartorial saint. Patti Smith, James Chance, the whole Downtown 81 scene: Their style was anti-fashionable in an era of bright colors and bombastic fashion. 1960s French cinema. Watching Godard’s Breathless in 10th grade changed my life. It introduced me to two vital, guiding forces: cigarettes and existentialism. Both sharply cool in contrast to the suburban milieu I grew up in.”

UP NEXT Of late Tranchemontagne has been flexing his writing muscles, finishing work on a number of chapbooks, which he aims to release at the end of the year. Also mark your calendars for Lit Crawl on Oct. 11, which will take place in more than 20 venues on Capitol Hill, featuring more than 100 local writers.