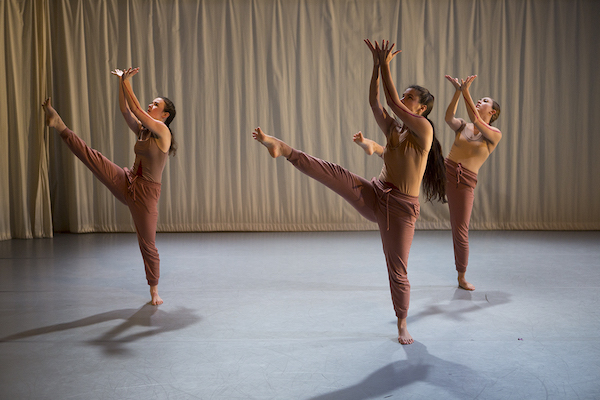 Esra Cömert-Morishige’s 'Would you know the difference if what I am showing you wasn’t real?' Photo by Tim Summers

Two women face each other, exhaustively describing the other’s appearance as they slowly back away. But it isn’t until their bodies are pressed against opposing walls that the final description bubbles to the surface with uncertainty. “She’s whiii…she’s white. Yeah, she’s white?” Fascinatedly repeating their realization, the two descend on one another, each grabbing the other’s face and turning it toward the audience in a moment of manic, dark comedy.

Laura Aschoff’s new work a plague every time is one of four presented last weekend at this year’s Bridge Project, Velocity Dance Center’s annual choreographic pressure cooker for artists who have been making work in Seattle for fewer than three years. The chosen choreographers make a new work in four weeks with a cast of dancers they’ve never worked with before, all while receiving feedback from established dance artists. The titular “bridge” is the connecting of these parties, and it’s often a first professional performance for newly arrived dancers hoping to break into Seattle’s scene. Bridge Project can offer fresh ideas from choreographers who’ve been flying under the radar, but just as often it results in works that, well, seem like they’ve been made in four weeks.

Though all of the pieces have a bit of a first draft quality, Aschoff’s time in the studio uncovered a few real gems—for instance, when one of the white women hides in the audience and the other is momentarily unable to locate her in the sea of white faces. The joke’s on us, and the audience at Velocity is reliably white enough for this to land every night. It also works because of Aschoff’s sleight-of-hand delivery; her work has a dark honesty that leaves us unsure if we should laugh or be horrified. There aren’t a lot of “dance moves,” but there is plenty of thrashing, nuzzling and frenetic wrestling layered with wry theatricality. The work loses some of its imaginative power in a section where the dancers’ pre-recorded voices discuss racism, but Aschoff has clearly developed a style of her own and most importantly, has something to say.

Other works on the program struggled to find a point of view. Renee Boehlke’s Floating Cities features a trio in billowy gray costumes. Like personified clouds, they waft through the space with tai chi-like movements at perpetual mid-tempo. There’s a peaceful resolve about the dancers that reminds me of watching nature, but without the pleasure of actually being outside.

Spaceholders, by Liz Houlton, fares a little better, full of overlapping duets and trios that play with manipulating each other’s movements. Neutral facial expressions accompany smooth turns, fluid weight shifts and quiet collapses that are often initiated by another dancer. At one point, Madeleine Gregor’s frozen frame is lowered to the ground like a plank of wood. It’s not without its interesting moments, but doesn’t coalesce easily into any strong take-away. Who are these people? Why are they manipulating one another? And why should I care about them? Spaceholders is perhaps too apt a title.

More successful is Esra Cömert-Morishige’s Would you know the difference if what I am showing you wasn’t real? A trio of dancers begins gathered upstage, their arms reaching and swaying like sea anemone tentacles. Fingers peel open in coordinated pulses as they stand front to back in an organic moving sculpture. A sudden, clacking sound disrupts and separates them, flinching, into three square spotlights. The boxes of light act as metaphoric examination tables where the dancers make motions as if measuring themselves. With sunken shoulders and nervous shame, they strip down to leotards with red triangles defining their crotches. Then, with a snap to red lighting, the dancers’ positions shift to movements of power and sensuality. Cömert-Morishige’s images are evocative, yet abstract enough to leave room for interpretation. In spite of some predictable pacing toward the end, Would you succeeds in taking the audience on a journey that ends in a very different world than where it began.

Bridge Project provides the opportunity for new voices to develop work with organizational backing, a laudable mission. But rehearsing daily for such a short time is not the easiest creative environment for anyone, let alone newer choreographers. Those who pursued more ambitious concepts came out with work that, at least, seemed to be saying something.