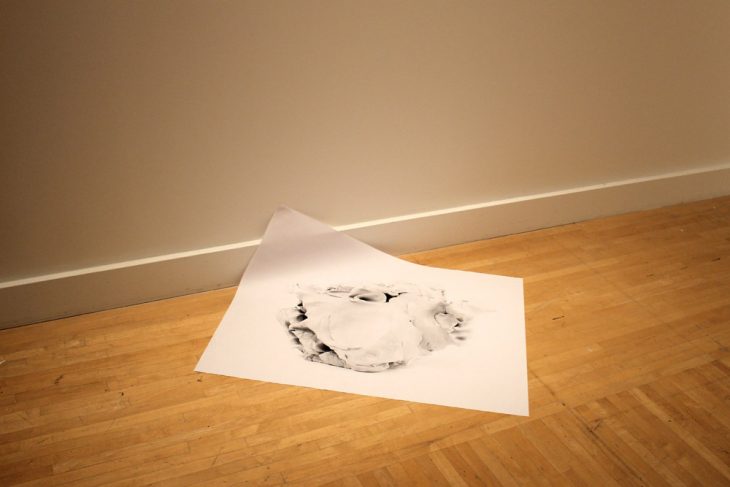 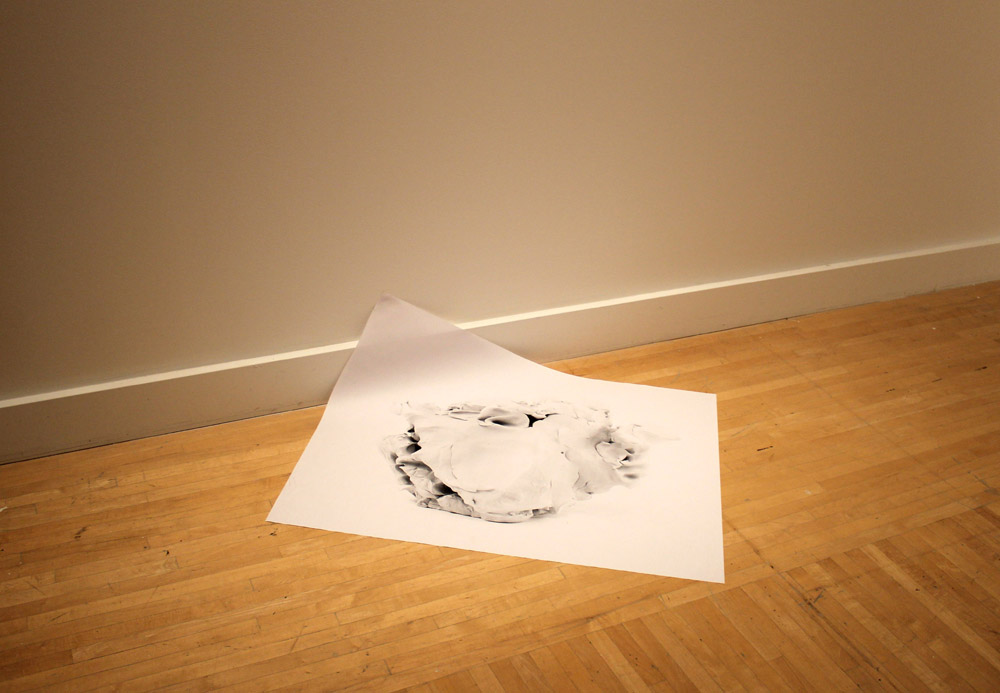 My favorite thing in the University of Washington MFA thesis exhibition is a photograph printed on a flimsy sheet of white paper that looks like it slipped off the wall onto the floor. I almost stepped on it by mistake.

The object in the photograph is a block of raw clay that artist Phillip Carpenter squeezed between himself and another person to make an impression of “the space between two people.”

Nearby, a massive photograph of a truck faces a makeshift table supporting two lumps of unfired clay similar to the one in the image on the floor. Both lumps bear fingerprints, as well as deep grooves from having been pressed against the truck. 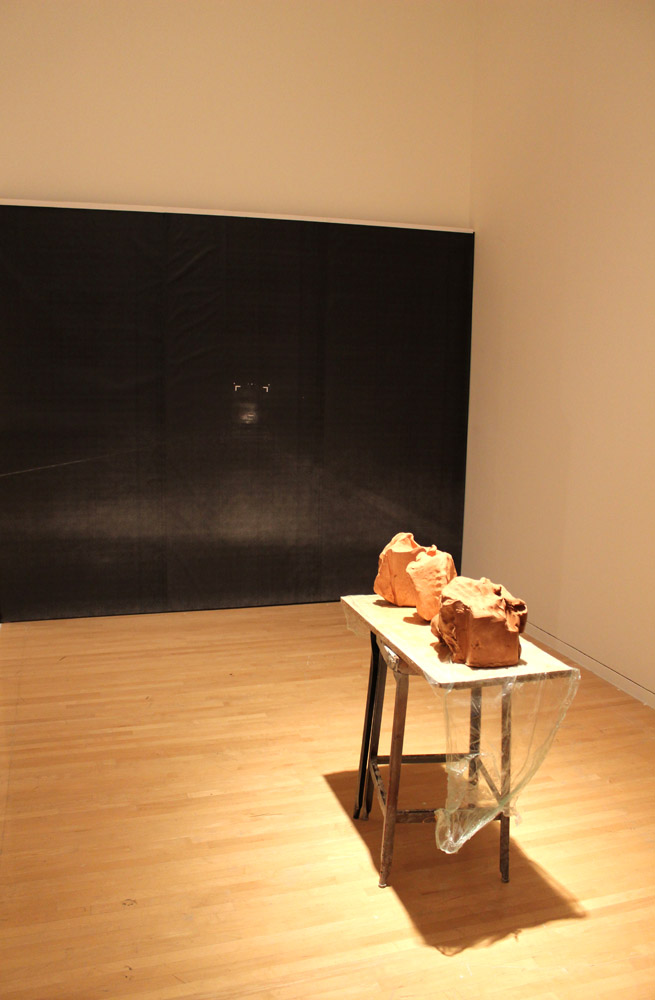 Phillip Carpenter, The Space Between A Truck and Myself, 2013

“The short version is, I’m interested in the spaces between things,” Carpenter told me as we were getting kicked out at the end of the opening reception at the Henry Art Gallery last Friday night. His artist statement elaborates:

We shape the world with intention and also with a thoughtless human movement. … As we set something down to pick something else up, the specifics of that placement give insight into…the shadows of our intentions, sometimes more powerful and telling than the full concentration of our objectives and intent.

Carpenter is concerned with all kinds of movements, from the most calculated decisions to the metaphysics of unconscious acts. In the context of the MFA thesis show, his work seems to be about all these artists who are still in the midst of honing and deciphering their own relationships to objects, intentional and otherwise. 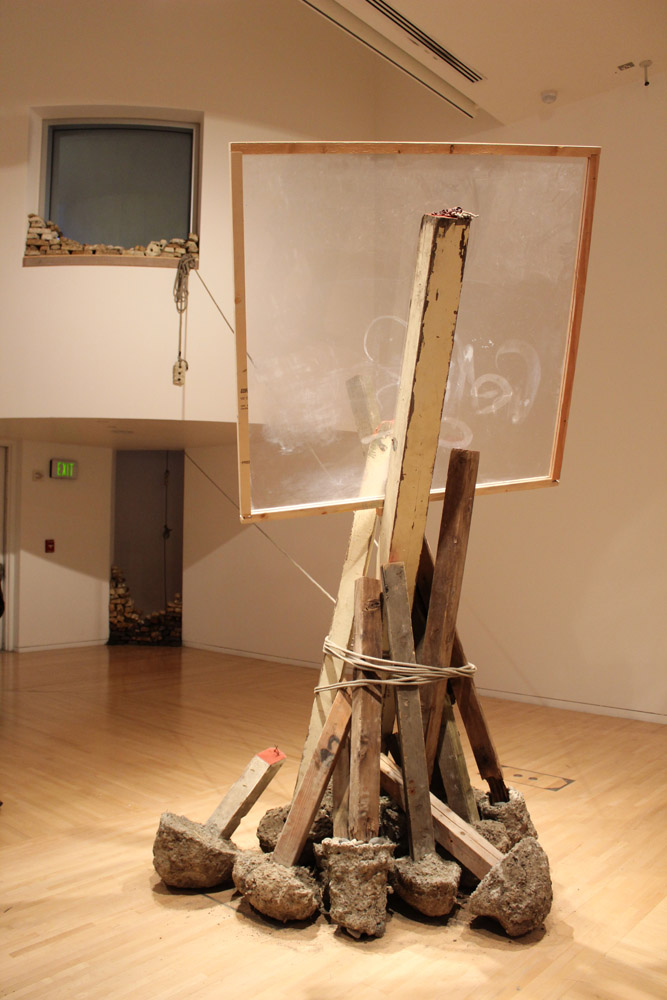 This improvisatory dance between intentionality and happy accident is particularly evident in the work of Meg Hartwig. Her Ubiquitous Assimilation, a site-specific installation of “ordered significant objects,” draws attention to the idiosyncratic architecture of the gallery by tethering a windowed sculpture to an oddly placed window in the back corner of the room. As it turns out, the window in Hartwig’s sculpture was salvaged when the window in the gallery was replaced due to vandalism only a few days prior to the opening. The visual impact of the work stands on its own, but it deepens upon realization that the figurative relationship between the two windows is more literal than it appears.

Like Hartwig’s work, Lacy Draper’s video-and-sculpture Conditioning the Conditioned is conceived with the uniqueness of the gallery’s architecture in mind. A video loop featuring images of competitive weightlifting is projected very close to the high ceiling, anchored by a sculptural piece of athletic equipment destined to never make it off the ground. Using the visual tropes of health clubs and gymnasiums, Draper’s installation investigates ideas of strength, industriousness and futility with seductive materiality and deadpan wit. If Lawrimore Project was still a gallery, this piece would be Draper’s foot in the door. 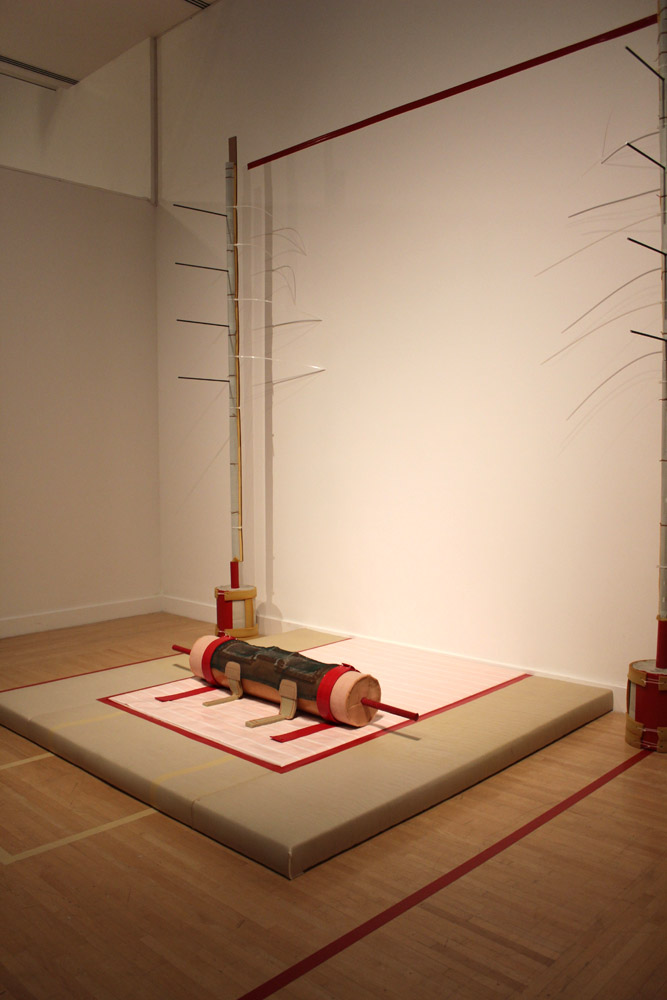 Overall, the works in this year’s MFA thesis exhibition are sleek and self-assured, with the exception of some of the paintings. Carly Cummings’ portraits are more like studies than finished works, while Margarita Iordache’s earnest illustrations of Bible verses are simultaneously too confusing and too literal. In both cases, I’d be inclined to overlook their conceptual thinness if I found the technique more engaging. Marcus Watson’s vibrant, voyeuristic paintings of exaggerated queer masculinity are stylish and titillating, but a bit obvious. In Watson’s case the idea is there, and I’m looking forward to seeing where he takes it. Of the painters, Ryan Weatherly shows the most physical mastery of the medium out of the gate. His works are also figurative, but his garish, painterly faces are an expressive, excessive delight to behold. 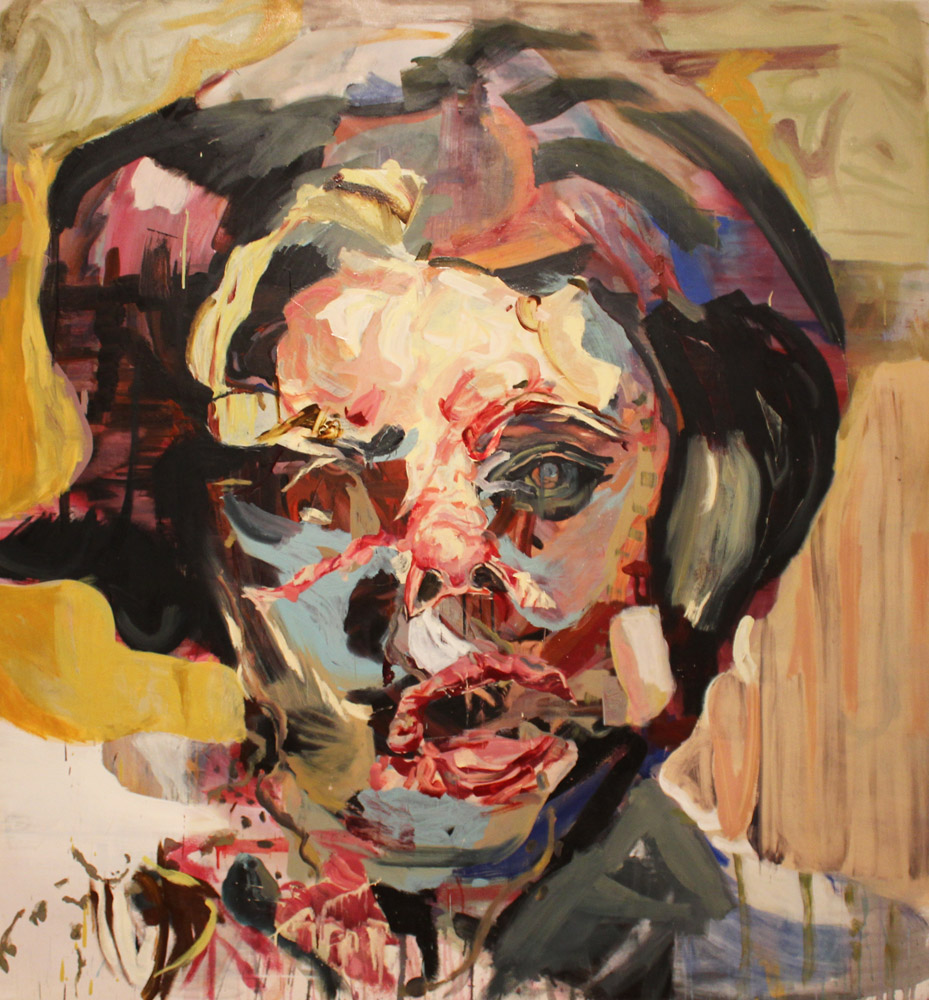 As Seattle’s only graduate school for artists, the UW’s MFA program is like a small factory that churns out an annual crop poised to embark on the professional path. Some of these grads are seldom heard from again. Others move on to cities more hospitable to their professional needs. But a third group stays put, at least for a while, forming an important contingent within Seattle’s art community. It’s hard to believe that both Rodrigo Valenzuela and Anthony Sonnenberg were MFA grads just last year—both have achieved a high degree of visibility in a short time.

As I absorbed the offerings of this year’s thesis show, I was tempted to speculate as to which of these newly minted MFAs would become future fixtures of the local scene. I hope to see more from Jared Bender, whose friezes of tools covered with clay look like archeological enigmas, and Melanie Wang, whose text visualization program bridges the oft-lamented gap between the design program’s presentation-ish projects and an interactive aesthetic experience that works as art. Most of all, I hope to see many of these young artists bring the struggle and momentum of their graduate experience into the community, engaging with Seattle as a challenging yet supportive place to begin a career. From the looks of the thesis show, many are off to a strong start.