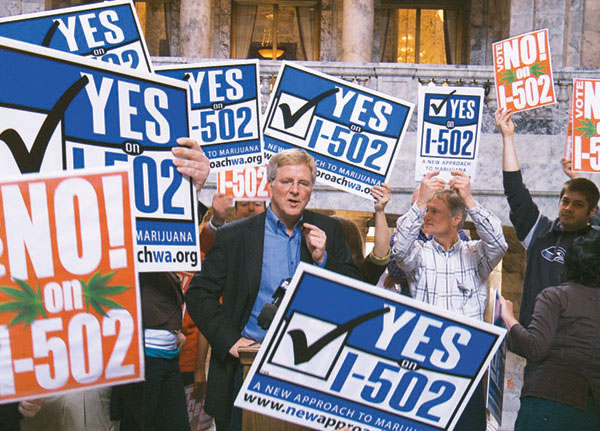 Director, producer and editor Jason Reid broke out in 2009 with his pugnacious documentary Sonicsgate, a feature-length film about the Sonics’ absconding from Seattle. In the years hence, Reid, 35, and his collaborators have made documentary features about a bicycle trip from Beijing to Shanghai, climbing K2 in the Himalayas and marijuana legalization in Washington. Amid a flurry of other projects—some documentary, some not—they’re currently in post-production on The Kicker, which focuses on place kickers in the NFL. We caught up with Reid on the phone during a break from editing at his Georgetown office.

What are you working on right now?
I’ve been lucky lately because I’m so busy doing fully funded creative projects. I’ve been doing shorts for Sports on Earth, which is owned by USA Today and Major League Baseball. It’s a great set-up because the distribution model is built in. We finish a piece on Saturday night and on Sunday it’s already out in the world.

We started in January with Mr. Irrelevant. Since 1976 the last guy drafted in the NFL draft has been called Mr. Irrelevant. He gets a trophy that’s like the opposite of a Heisman Trophy—a statue of a guy dropping the ball. We talked to Mr. Irrelevant 1978, 1991 and 2009. Then Sports on Earth asked us to do a piece on the Jamaican bobsled team from 1988, Breaking the Ice. We had three weeks to put the whole thing together in time for the Olympics. It was crazy. The third one just came out—The Finish Line—about Bill Iffrig, the 78-year-old runner who was knocked down at the Boston Marathon bombings. That was actually the first project we knew we were going to do for Sports on Earth because Iffrig is from this area.

How is it different when you’re making a film about an issue versus when you’re doing a portrait?
The success of Sonicsgate showed me the impact a film can have. That made me want to do more political, issue-driven films. Evergreen—about I-502 and marijuana legalization, opening theatrically in June—was like that. Issue films are more intellectually challenging, but the sports pieces are great, too, because even though they’re about sports, they’re really about people. And I love that portraits can be more meditative and atmospheric.

What do you like about making shorts?
The shorter pieces are great because the payoff comes so much faster and they teach us to be more efficient storytellers. Originally the Sports on Earth pieces were supposed to be 10 minutes. But Mr. Irrelevant ended up being 16 minutes, Breaking the Ice is almost 18 minutes. With The Finish Line we tried really hard to get it to 10 minutes, and it came in at 12 minutes and 20 seconds. Sometimes you’re just trying to fit it all in. That happened with Sonicsgate, too. The original version we released online in 2009 was two hours, but then CNBC called and they wanted us to do an edit for television and it had to be exactly 43 minutes and 10 seconds. We basically had to take the entire film apart and build it again from scratch. But we did it—and that’s the version people have seen on TV. It doesn’t feel like it’s missing anything critical.

I’ve learned a lot about storytelling. With every project, our team is getting better and better at capturing the essence of these unique subjects.

Evergreen: The Road to Legalization, pictured above, premieres in Seattle on June 27 at SIFF Cinema.