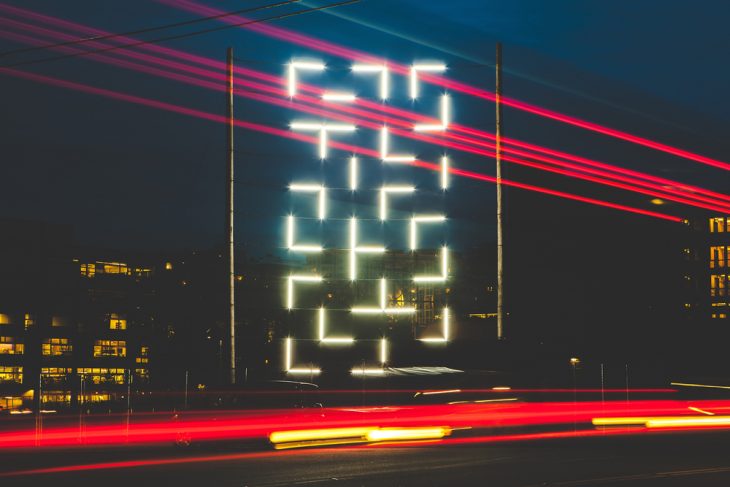 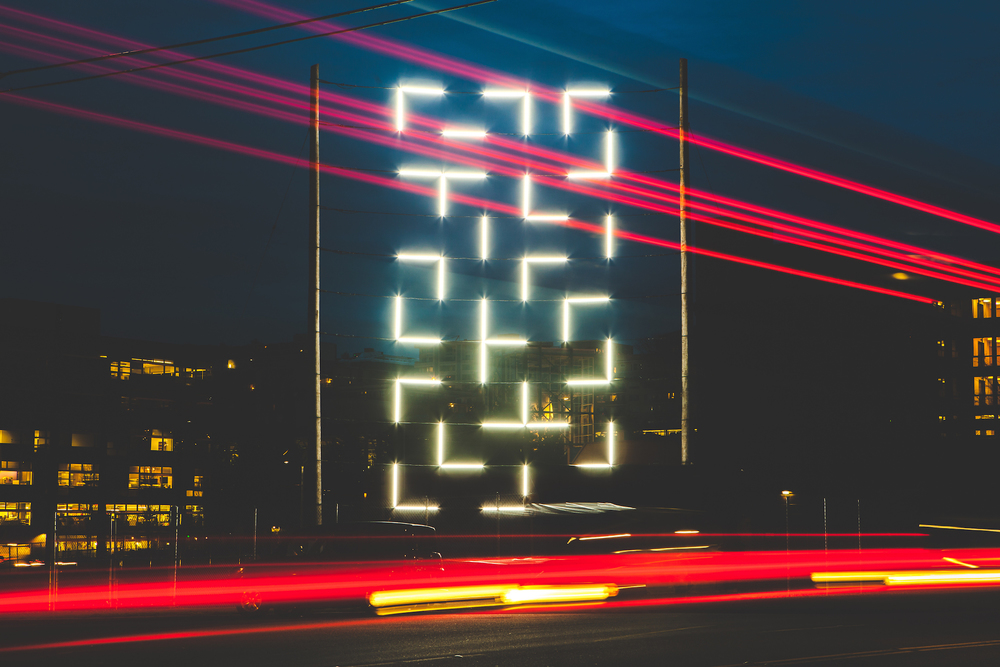 Look closely at that giant empty lot at the bottom of Denny Hill and you’ll notice it’s not so empty after all. For the last year, this sprawling gravel lot—the former location of the Greyhound bus maintanence depot, now demolished, and future home of a Seattle City Light’s Denny Substation—has hosted an array of arts events, from dance performances to lighting installations to sculpture to temporary gardens. Portland-based curators Meagan Atiyeh and Elizabeth Spavento won an 18-month residence contract from the city and launched All Rise to showcase artists from across Cascadia and beyond. This Thursday, the pair partners with Portland musician Chris Johanson to present the Quiet Music Festival, a free, low-key happening that brings San Francisco psych-poppers Sonny & the Sunsets to headline alongside Portland band HITS, plus a couple other musical guests and a bunch of visual art. As All Rise comes to a close later this summer, we spoke with Atiyeh and Spavento about the past, present and future of the project.

How did you guys get the space?
Meagan Atiyeh & Elizabeth Spavento (together): We had to fight for it!

Atiyeh: The City of Seattle Office of Arts and Culture put out a call to curators in Oregon and Washington, so we applied and went through a proposal process and here we are. We put our first work up in March 2014.

At first you both remained anonymous and refused to divulge your identities in interviews.
Atiyeh: We started out that way but we were never very hidden—our bios have been on the website the whole time. It was more an effort to have the work speak for itself. We didn’t want it to be a project that focused on the curator—we wanted, and still want, to focus on the artists and have a certain sense of mystery, spontaneity. 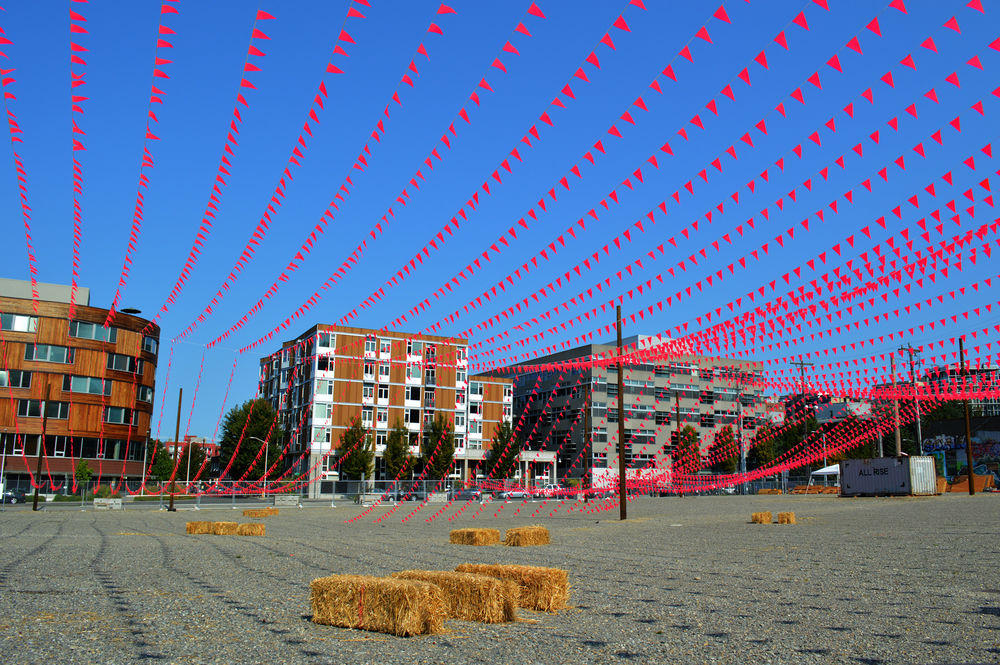 Has your programming been more low-key in order to maintain that sense of surprise?
Atiyeh: Some of the gestures have been bigger and it’s interesting to see people’s reactions to each of the different installations. The pink flags of the Canopy Project got people’s attention because you could see them from Capitol Hill. And the light piece from Ben and Etta [of Lilienthal|Zamora] was big and bright. Instagram loves it; it’s very photogenic. But we’re intereseted in all of the layers, from big to minute, and to some extent we’re purposely playing with that sense of scale. It’s the best way to take advantage of a 90,000 square-foot space. When you have that much space you’re expected to kind of conquer it but we realized there’s more impact in scaling back and making it something modest.

So there wasn’t a through line with all of the work you’ve presented, which also maybe contributed to a sense of surprise. Or that these things just arrived there spontaneously, without any direction, like graffiti or street art.
Atiyeh: We’re working with artists and asking them to consider different iterations of space, of land—agricultural, residential, commercial. The artists are inserting themselves into this urban environment but they’re using recognizable strategies and language. [Current All Rise artist] Molly [Dilworth] is a sculptor and painter that shows nationally but her pieces could also be a community garden. Or the Canopy piece—people thought it might be a car lot or a circus. These projects are tricking the eye into seeing recongnizable statements of all of our shared experiences of what land could be.

It’s cool to see art blend into the urban environment so seamlessly.
Spavento: That’s what we’re going for. Sure, we can capture a spontaneous moment but that spontenaeity is also very calculated at the same time.

Atiyeh: We hope people look at this as a way in to more contemporary public artwork. We’re so used to making a distinction between art and public art that temporary programs like ours provide an opportunity to experiment and get people to think about art in their daily lives in a way a public sculpture wouldn’t do. 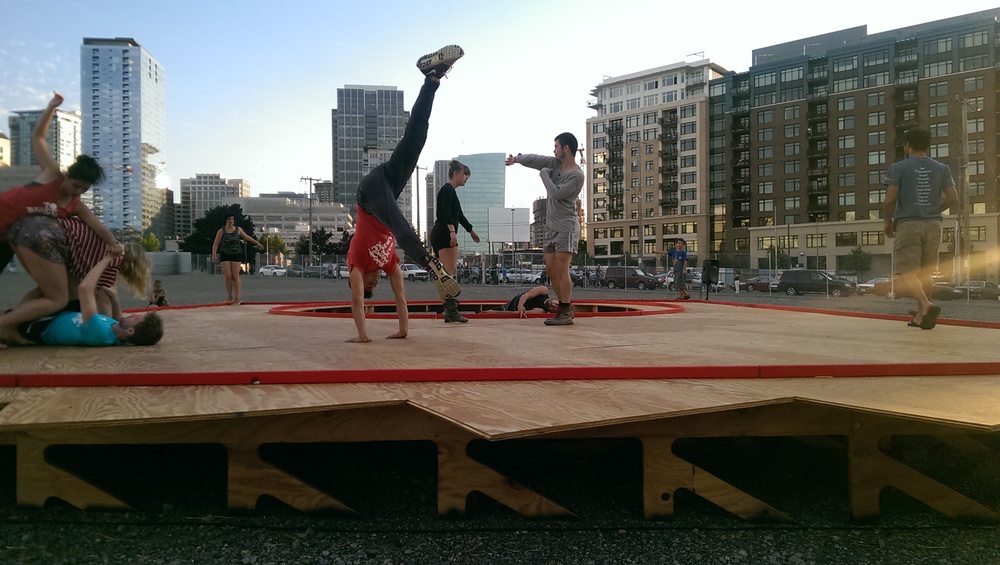 So what’s gone on there? What have I missed?
Spavento: We did a month-long dance residency program with Velocity and Venessa DeWolf the Seattle Festival of Dance and Improvisation. We had an 1,800-square-foot artwork, a beautiful sculpture that became a stage where every week dancers came in [and performed] and every weekend we opened the space to the public for free concerts. We like to play with the idea of formality in something casual, so we’ve been letting musicians come up and play the site and create, buskers essentially. When the Canopy was up we had a cellist flash mob for 20 people. We’re not concerned about getting the largest audience possible, we just want the people that are there to have that experience. We put up this canopy and that covered the entire lot and for 10 minutes there was an actual performance. If you walked by you caught it, and if you didn’t you wouldn’t have known it happened.

Have you intentionally kept quiet with the press? This Quiet Music Festival is the first official press release I’ve received from All Rise.
Atiyeh: We’ve used press releases sparingly, and work with the Office of Arts and Culture to time them with each happening. Quiet Music Festival allows for more people to be drawn to the site. We still wanna limit it—we don’t want it to be a huge concert—but it allows for people to make plans and come listen to the musicians.

Spavento: And alse the nature of some of the artwork—you are meant to experience it in a transitory way. As everything changes we’re embracing that part of it and encouraging people to be present with the site.

And then it all wraps up at the end of the summer.
Atiyeh: Yeah, September. At this point we feel like we have a good base of awareness which makes it easier to control who’s coming down. We have a good summer plan. This is our last hurrah as well so we’re really excited about summer. You’ll definitely hear about it.

Spavento: From the beginning, with the title All Rise we conceived of the project as starting off with something very slow and poetic. And the programming would amplify so at the very end we’re pulling out all the stops.

What’s the format for Quiet Music Festival?
Atiyeh: It’ll be a very casual, bring your own blanket/hay bale/sit in the grass. The concert will happen on top of Molly’s earthworks piece. We’re trying to create an intimate space in the middle of the city. Quiet Music Festival has gone on for four years in Portland and we’re a one-day warmup before the fifth year. I’ve been a number of times and Chris takes the quiet thing seriously. If your cell phone rings you get glared at. It’s great. He’s trying to get people to think about a concert in a different way, especially because the demographic that ends up listening to this music, for them it’s new to be in public but listening attentively and being mellow. It’ll be a lovely, quiet festival, like a bunch of friends getting together and relaxing in the living room listening to music.

And what about the rest of the summer?
Atiyeh: We’ll be installing a siginificant project right before Seattle Art Fair [at the end of July], a London-based artist. And then some great video work. You might walk by and see 20 residents from [retirement community] Mirabella watching their favorite move and eating popcorn. Or you might see a Creative Capital artist presenting his site-specific work. There’ll be a little of everything this summer.

Spavento: And there may or may not be an animal encounter for about a week. There may be baby goats.