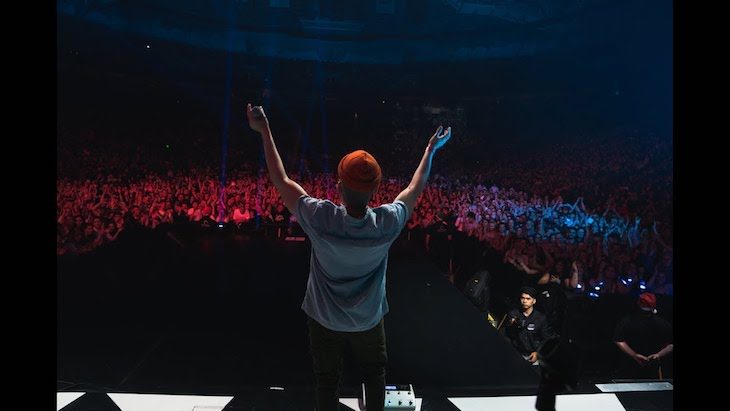 Tomorrow brings the second coming of Upstream, the locally focused live-music blowout that this year hosts 200-plus bands in 15 venues across Pioneer Square. The headliners are mostly out-of-towners like Miguel, Little Dragon, Zola Jesus, the Flaming Lips and Cut Copy, plus Seattle celebs like the True Loves, Tacocat and Daniel Pak—and splitting them among two adjacent main stages will ensure the music flows continuously. But as proven during last year’s event, most of the action happens in the small, offbeat, non-venue venues that see live music only during Upstream—places like Axis Gallery, the Buttnick Building and Comedy Underground.

Add to that list 13 Coins, the recently relocated Seattle late-night dining institution that opened last year on the ground floor of Pioneer Square’s brand-new Embassy Suites Hotel. Below the restaurant is the Lower Quarters, a surprisingly swanky bar and nightclub that mostly sees cover bands and tourist-oriented musical fare on the weekends. City Arts is psyched to host our second Upstream showcase on Saturday at the new venue, a luxe subterranean den done up with leather furniture, sumptuous lighting, a full bar and an avant-garde foosball table.

It’s an appropriate locale for City Arts, as our Saturday night Upstream lineup spans Seattle’s musical underground and comprises a trio of ultra-stylish bands. Headliner Otieno Terry is a shape-shifting neo-soul shaman who we first encountered years ago as part of the house band at arts incubator/party space LoveCityLove. Last year Terry released his debut full-length The Woods, which he described in a City Arts interview as “intentionally eclectic—different pieces of a bigger story, because there’s never been one form or style or genre that I’ve stuck to or found comfort in consistently.” If there’s a prevailing theme, it’s soulful groove, which Terry will surely unload on the Upstream crowd.

Second on the bill, FKL is a noirish, sensuous minimal-techno-soul duo comprised of married musicians Joe Gillick and Sage Redmond. The pair released the fantastic Out of Tune LP on their own Orphan Records late last year; we made it our November Album of the Month. After sitting with this record in my earbuds for awhile I’m anxious to hear how Gillick and Redmond translate it to the stage. I suspect that Redmond’s aching voice and the duo’s thrumming layers of percussion and synths—a vibe-heavy pulse akin to the xx—will sound especially sinister in the live setting.

Starting the night is Terror/Cactus, the brainchild of Martín Selasco, who’s primary objective is to infuse the cumbia music so prevalent in the Latin world with a sense of cinematic psychedelia.

“Cumbia is appealing to me because it’s a unifying thing between countries,” Selasco told me for City Arts’ recent Best New Music feature on Terror/Cactus. “It lends itself to mixing with dub or surf guitar or other elements. It doesn’t have to be just one thing. It can evolve.”

Selasco and his bandmates—a drummer and multi-instrumentalist/projectionist—perform wearing masks and blasted by animated projections. The idea is to minimize the individuals making the music in favor of a more universal sense of the music itself. Submerged in sound, transported away from time and space into a realm of pure imagination: Here’s hoping that’s the overall effect of our Upstream showcase.

Due to a scheduling mixup, our original headliner, Montreal-based, Seattle-loving Pierre Kwenders and his band are stuck in Canada this weekend.

Along with all the local love we’re excited to share at Upstream, I’m also stupendously excited to check out Jamaican post-dub duo Equiknoxx at the Orphan Records showcase Friday night at Comedy Underground. The band makes music unlike anything else, an unsettling, absorbing sort of rural-industrial studio symphonics that insinuates a cacophony of bird noises among its loping, propulsive clang and whirr. It’s truly weird stuff. This will be the band’s first time in Seattle and one of their first-ever shows in the U.S. and another one of the 200 reasons to check out Upstream. See you there.