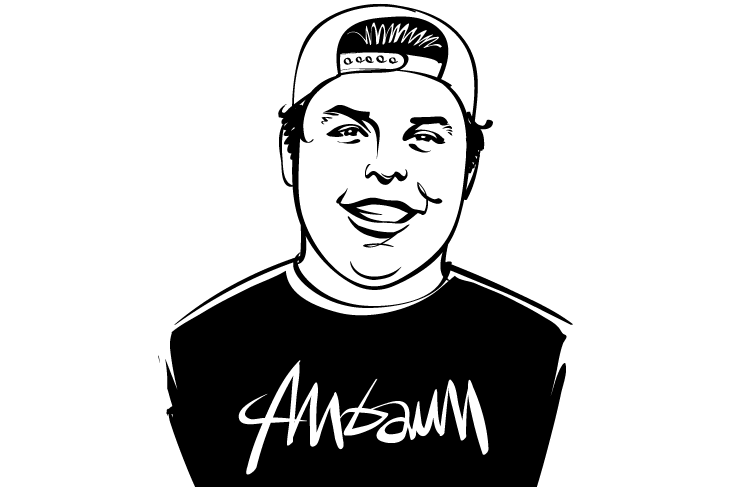 Travis Thompson looks comfortable holding court inside of Zippy’s Giant Burgers in White Center. He grew up just blocks away—his father ate burgers here as a kid—and this is the neighborhood he thoroughly represents on his new record, Ambaum. Neighboring Burien is home too, and he’s just enough of an outsider from the Seattle hip-hop scene that he’s comfortable creating his own lane. For the past two years he’s been on a meteoric rise, from standing out in EMP Museum’s Sound Off! and Hip-Hop Artist Residency programs to national touring, performing at Timber! Fest and capping off the summer with a sold-out record release party at the Crocodile. Not bad for a kid who just turned 20. As he scarfs a burger and fries, he reveals that his formula for success is composed of honest, self-deprecating raps, comedic timing and a chip on his shoulder.

Why is all this good stuff happening now?
I don’t know! I don’t think I’ve ever been as honest with my music as I am being now. I feel like I’m just now starting to find my voice. I didn’t know how to tell a story of a dirty kid from White Center/Burien who would go and steal things from people’s houses at parties. I feel like I’m just now learning how to tell my story.

You have a style of rapping that comes across as earnest and willing to take shots at yourself. Where does that come from?
I’m super into standup comedy. Standup is often self-deprecating. I was never enamored of having amazing bars. I’d much rather make people laugh. If you’re yourself and you’re vulnerable all the way, even when things aren’t pretty, and you’re poking fun at yourself, it means more. Not everybody can relate to being the best rapper but every guy can relate to having to clear his Google Chrome history.

What comedians do you like?
I really love [Pakistani American comic] Kumail Nanjiani. That was a total hipster thing to say. I like Aziz Ansari, Pete Holmes and then old-school: I love Chris Rock and Louis CK.

Would you ever try doing standup?
Definitely. Back when I did poetry, all of my poems were pretty funny. I really wanted to blend standup comedy and spoken word poetry. And then that became rap, which became self-deprecating and fun for me. Having jokes and being funny is more interesting than being an amazing wordsmith.

You just signed a deal with Gyld [Seattle-based music streaming site].
Yup. All of my music will be up there to stream once the service officially launches, but they’ll have one exclusive song of mine that you can only hear on Gyld. Jake One [Seattle super-producer and Gyld A&R] reached out to me. He DM’d me—and to get a DM from Jake One is like whoaa. He did the John Cena intro music. That’s a gawd. That’s a legend.

Is there a part of you that thinks you’ll always feel like an underdog?
Absolutely. I look in the mirror and say, “Bro, how are you a rapper?” I’m a weird person so I’ll always feel like an outsider. But that inspires me to make better music. Don’t accept me. My friends always remind me I’m just an ugly kid from White Center. That’s what keeps me from ever getting a big head.

Do you feel like it’s your duty to put on for White Center?
When I put the record out, people from here got so excited and were shouting out the streets where they grew up on my Facebook page. There are people who put on for [West Seattle] like Mackned and SneakGuapo but nobody has ever really repped White Center/Burien, ever. Like, it’s dope to get a message from a kid in Germany who likes the music but it’s better to get a message from a kid who lives two blocks from my house.

What are your favorite spots to eat in White Center?
I wanted to throw the Ambaum release party here at Zippy’s but they said no. Pho 99 is super bomb. The roasted corn stand right next to White Center plaza is solid. Their roasted corn is fire. With the chilé and the cheese on it…whoo! Taqueria Rincon right next to the Log Cabin is bomb. And I like the bánh mì at Queen’s Deli. I went into Queen’s Deli and the woman behind the counter actually knew I rapped. It was dope.