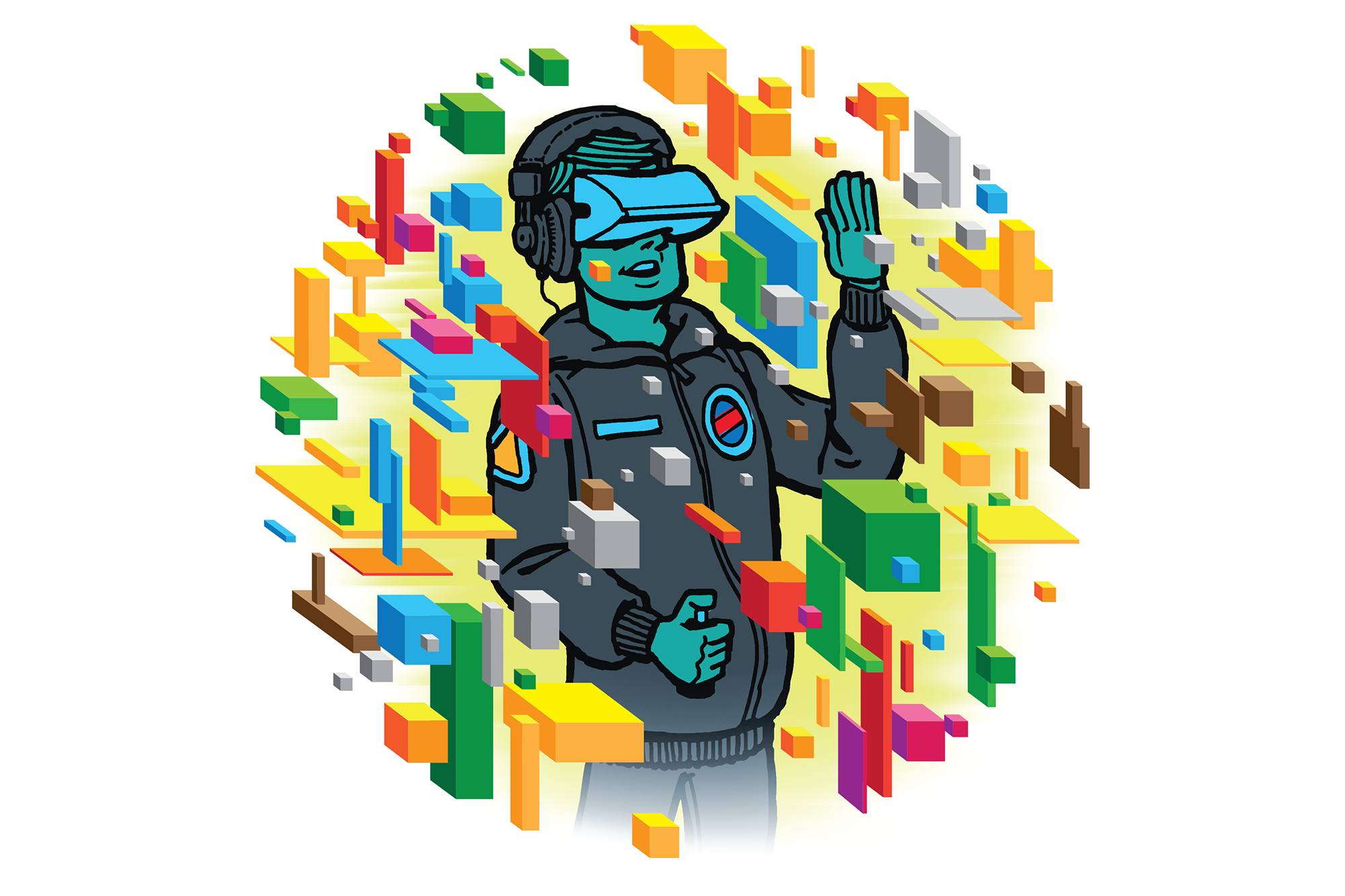 I’m on an otherworldly tour, marveling at stars and planets from a floating space station one moment and exploring a futuristic dreamscape the next. But not really. A virtual reality headset covers my eyes and ears. When I move my head, everything I see moves in kind. When I step to the side, I step to the side in another galaxy. When something “behind” me makes noise, I can place it with my ears and turn around to see what it is.

Virtual reality used to be a tech-industry punchline, an impossible pipe dream that stuck ugly goggles onto people’s faces to make them play childish games. But today big companies and even bigger dreamers are proselytizing about it. In March 2014, Facebook invested $2 billion in a VR company called Oculus. Sony, Samsung and Microsoft followed suit with big product announcements of their own. The technology behind VR just keeps getting better—and cheaper to make.

But perhaps the biggest reason for virtual reality’s current surge is that decades of research and experimentation have paid off, unlocking a new realm of control, viewpoint and perspective and forcing people to ask new questions about the visceral and artistic possibilities of computer imagery in film, games, sculpting, composing and beyond. Artists and designers are about to take us to very new places, and even they don’t know exactly where that will lead.

In the meantime, big products from tech giants like Sony, HTC, Samsung and Oculus are launching in the next six months. Giant expos, like October’s SEA VR 2015, are taking over entire convention halls. And local geeks, in big offices and small garages, are experimenting with possibly the biggest computing innovation since the touchscreen.

Samantha Kalman is a video game designer and founder of Seattle’s Invisible Arcade indie gaming exhibit series. She’s sitting next to me on a bench at Cal Anderson Park, ready to demonstrate a few of her recent VR projects, mostly unfinished stuff. She taps a few phone buttons then hands me a white headset. She struggles to contain herself as I try it on, knowing that any descriptions will pale compared to experiencing Kalman’s demos in person.

The $99 headset is called Gear VR. It’s made by Samsung and, because it requires no bulky cables or controllers, it’s possibly the simplest first-taste version of virtual reality. The headset has a neat little slot to hold a compatible Samsung phone, like sticking a Pop-Tart into a toaster. Slap a phone in, put the headset over your eyes and the Gear does the rest, using a special pair of lenses to convert your phone’s single screen into a tidy goggle view.

The most impressive of Kalman’s demos is Sentris, a VR version of a music-creation game she released for computers earlier this year. In the computer version, players become techno conductors in a game-like way. By tapping buttons, they place pre-recorded synthesizer notes, drum beats and other sound effects onto a spinning, vinyl-like disc; as the disc spins, it plays those sounds as repeating, danceable loops.

Sentris works fine with a conventional gaming controller or mouse, but virtual reality will offer a more immersive way to conduct. The VR version’s not done, but one idea is that users will simply look where they want to place sound effects then tap a button on the side of the headset. Look, tap and become one with the loud, colorful, spinning soundscape.

In another demo of an unfinished project, I stand in a dark room covered in colorful wires while strange orbs float in the air. At this point all I can do is move the orbs by simply looking at them, and yet, goodness, I’m moving orbs with my mind. What I see appears abstract and aimless, but I don’t care. Everything looks so pretty, and my body feels like it’s been whisked far away from the park bench.

Kalman has been obsessing over VR’s ability to bend our senses to a creator’s whim for about a year, when Bellevue gaming company Valve Software (makers of nerd classics like Portal and Half-Life) invited her to a surprise VR test.

She was skeptical. But then she was blown away by a demo that allowed her to walk around in both real and virtual space while wearing a headset. (The demo was designed in such a way that real walls appeared in virtual space, so nobody smacked their heads.) In that demo, she interacted with an anthropomorphic robot.

“What was most impressive to me was the utterly convincing feeling that these robots were actually standing right by me,” Kalman says. “The next day, I was thinking about the six-foot one in front of me, and I found myself saying, ‘I wonder how that robot’s doing.’ Like, no! He’s not real! He was never in the room. That was the strongest moment where I thought, there’s a totally new opportunity to relate to characters in ways we never have before.” 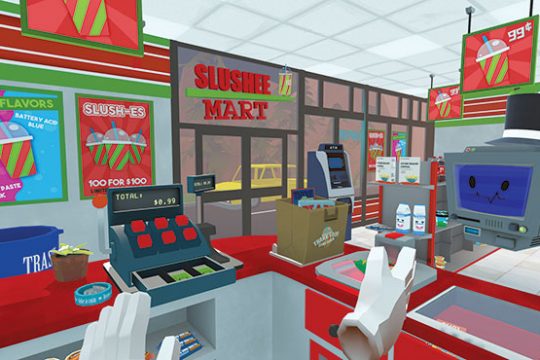 Job Simulator puts virtual-reality players into boring, everyday situations—then lets them act as wild or goofy as they want.

Like Kalman, I’ve tried virtual reality since the ’90s, when arcades experimented with giant, blurry, uncomfortable headsets and games revolved around laser-loaded kids’ stuff. Today virtual reality is much more serious, largely because the headsets have proven pretty simple to make.

A few years ago, hackers noticed that modern mobile phone screens are packed with millions of tiny pixels, so they look smooth up close. They began experimenting with homemade headsets by chopping up and remixing phone components—screens, sound chips, tiny circuit boards. The results looked good and producing the headsets wasn’t overly expensive.

The same can be said for newer headsets coming from Sony, HTC, Samsung, Microsoft and Oculus: They’re not only affordable, they work. Oculus and HTC headsets, in particular, refresh quickly enough that you don’t notice any annoying effects, such as ghosting or motion sickness. When a game sticks you in a jungle or a convenience store or a submarine, the speed and quality are good enough to sell the conceit.

The headsets are being paired with novel new ways to control what you see in virtual space. Instead of memorizing button combinations or learning how to use a joystick, users of HTC’s Vive system wave around Wii-like wands. In virtual space, these look like hands, and the experience involves more natural motions and actions. Stuff like guns and bows-and-arrows work like in real life, but more compelling is how waving your hands in virtual space could change other applications, such as painting, sculpting, architecture and medical uses. Walk through an AutoCAD rendering of a future building; direct a microscopic robot to perform surgery; prepare for a movie shoot by arranging VR versions of set pieces, actors and cameras.

VR also makes it possible to watch an entirely different kind of movie. In August, the Kaleidoscope VR Film Festival filled a SoDo office space with headsets, all pre-loaded with films that ranged from cartoonish to abstract to stark. Colosse stars a computer-generated man who explores mysterious caves and eventually comes upon giant monsters; as viewers move their gaze, the film’s characters react and move in those directions. The result is striking, as if the scene is unfolding with you in it.

Another film, narrated by Susan Sarandon, places viewers in the middle of earthquake-ravaged Nepal, where they can watch extended, real-life sequences of life continuing after tragedy. This film, The Nepal Quake Project, has neither sweeping director’s cuts nor melodramatic edits; viewers are instead forced to dwell in these difficult scenes, as if they’re standing with families trying to reestablish normalcy amid rubble.

Although VR isn’t only for games, many game makers are leading the development of VR in the market—and they’re experimenting with what a game can be. Job Simulator simply encourages players to become a cubicle slave, a kitchen chef or a convenience store clerk—and they can be as sloppy or silly at the jobs as they want. Fantastic Contraption puts people in a toy-construction facility where players use their hands to create little robots from scratch. Both of these games revolve around the weird experience of modern virtual reality—the idea that, say, picking up and throwing a virtual Slurpee cup at a fake customer feels simple, real and kind of titillating.

This new sense of wonder has sent even seasoned game developers back to the drawing board. Endeavor One, a Seattle company made up of a handful of former Halo staffers, moved from giant Bellevue offices to a single Capitol Hill garage to work up some unconventional ideas. Some of them are game-like, including a Tron-style battle game called Duel where players aim and dodge with their hands and bodies, while others are less structured, like a giant “virtual chat room” that currently resembles similar concepts of the past two decades. Endeavor One’s Halo-loaded resume is all bombast and action, which makes its most compelling VR demo all the more intriguing: The unnamed experience sets players floating in outer space, surrounded by stars and suffocating silence. No jumping, no guns, just a viewer alone with infinity.

Nobody’s sure which VR application will excite new users at first blush. Samsung thinks it might be a Netflix viewer, which transports people into a virtual living room with a giant wall-mounted Netflix display. My bet is on Tilt Brush, a simple paint-sculpting app for the Vive. Wave a wand to drop dabs of paint in the virtual air, then walk around to paint in all dimensions, or use your non-brush hand as a virtual palette. A recent viral video starred a veteran Disney animator who used the Vive to paint three-dimensional versions of famed characters Ariel and Beast. He’d never used VR before the camera starting rolling, yet he immediately started creating virtual art with grace.

Over the coming months, a number of working, quality VR headsets will reach store shelves, each with their own issues (size, bulky wires or powerful PC requirements). But early creators have already come up with a “common language,” Kalman says, meaning VR artistry has already begun and nobody knows what’s coming next.

“Just like filmmaking, a few rules are already well established,” Kalman says. “If you know the rules—and how to break them, and what happens—then you can utilize that to make something new.”

Job Simulator puts virtual-reality players into boring, everyday situations—then lets them act as wild or goofy as they want.