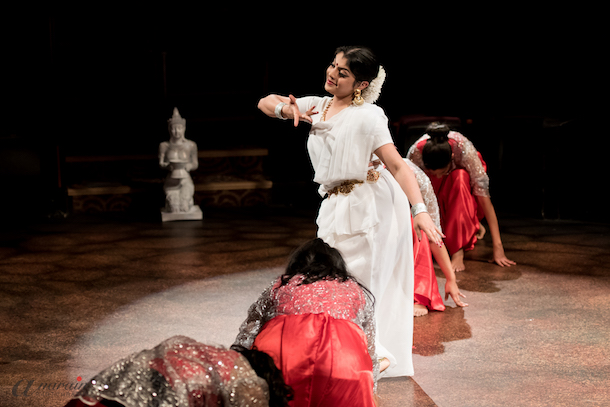 Sixteen years ago, a handful of immigrants in Seattle met up one night to share a traditional Indian meal. What started off as a typical gathering of friends sharing food and stories quickly turned into an evening of reminiscing about the various art forms (especially music) they had each studied as children in their home countries—pastimes that had waned over their years in the United States.

The more they talked, the more animated the conversation became, and by the end of the night each person had agreed to throw in $100 to rent a community center and put on a single concert. They dove in with low expectations, thinking maybe a few dozen people would attend, but soon found themselves with a large audience and inquiries about the next show. Sensing an opportunity to create a community around Southeast Asian arts and culture, the dinner party crew formed Pratidhwani (which means “echo” in Sanskrit), an organization that promotes those art forms throughout the region, and provides immigrants a platform for their creative talents.

“When Pratidhwani formed there wasn’t a readily available outlet for those who wanted to play or hear authentic live Indian or Southeast Asian music,” says Moumita Bhattacharya, who has been involved since 2010 and currently serves as the organization’s president. “It started with music, but within a few years the program expanded to include drama, and then a few years later we added dance.”

Although Pratidhwani is involved in dozens of events each year, their full-scale production of dance-drama Chitrangada, now running at ACT Theatre, is the largest and most ambitious work to date. Written in 1892 by Nobel laureate Rabindranath Tagore, Chitrangada tells the story of the only child of the king of Manipur, Princess Chitrangada, who is raised as a man and a warrior but begins to question her character when she meets and falls in love with the great warrior Arjuna. The titular character struggles with identity and self-acceptance; the themes are complex and, despite the 125-year remove from today, socially and politically relevant.

“When she tries to change her true self in order to please someone else, she isn’t satisfied, says Bhattacharya, who directed the show. “And only when she embraces both her feminine and masculine attributes does she find true happiness and acceptance—both from herself and others.”

Like all Pratidhwani shows, Chitrangada is produced and performed by an all-volunteer cast and crew of almost 90 individuals, some of who rehearsed for up to a dozen hours each week. Presented in the round, the production runs much like a musical: the story is set to traditional Indian music, with the characters acting out scenes in dance. Pre-recorded music, played by various members of Pratidhwani, includes Tagore’s poem in song form (“We wanted to honor his original text,” Bhattacharya says of the decision to retain the Bengali language), while narration between dance numbers is in English. Dazzling costumes were either hand-sewn by volunteers or flown over from India, and choreography was drawn from six different classical Indian dance genres.

“Each dance you see on stage reflects a different discipline,” Bhattacharya notes. “People who come to our shows are used to the Bollywood style, which is flashier and more comic. This show gave us a chance to reach back to the a more classical style.”

Chitrangada is already attracting varied audiences—a major goal of Pratidhwani as they continue to grow. “Up until now we’ve really acted as a hub for the Southeast Asian community,” says Bhattacharya, “But moving forward we hope to share our culture, our music and our stories with the greater community. At one point in the show Chitrangada says to Arjuna, ‘I will not be a goddess, I will not be someone you slight; I will be your equal.’ Given our current global environment, that sentiment of equality and respect just really hits home. Talking about these issues is still just as important now as it was 125 years ago. Some people may not like it, but it’s a conversation that needs to be had.”

Chitrangada runs through May 20. Tickets here.