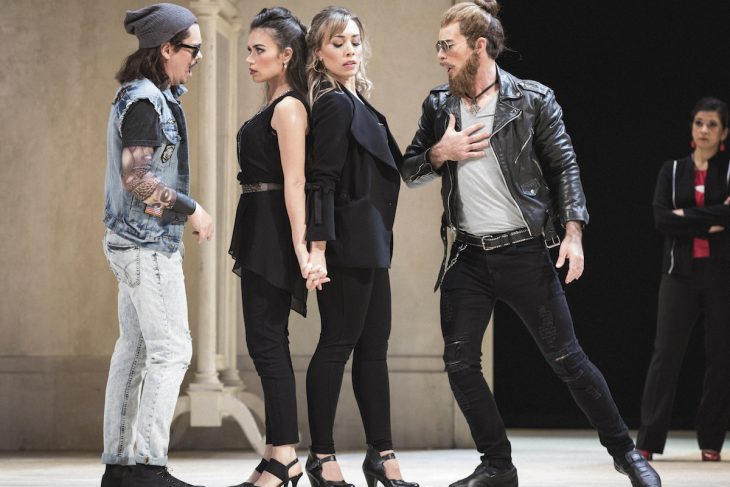 Mozart’s opera Cosi fan tutte (often roughly translated as “All women behave that way”) with its libretto by Lorenzo da Ponte, was considered scandalous when it was first staged, because of the frank display of female sexuality. Today it is equally scandalous, but for the cynical consideration of women as A) all cut from the same cloth and B) habitually faithless.

Seattle Opera’s production, premiered in 2006 with original stage direction by Jonathan Miller, was set it in Hollywood, where it made more sense. Miller’s production has now been revived by director Harry Fehr and set in today‘s Seattle, where the premise is downright offensive—perhaps because this production is blunt in its portrayals. Today we would call it deliberate harassment.

Briefly, the story is that of two sets of devoted young lovers and a cynical older man, Don Alfonso. The lovers all profess undying faithfulness to their partners. Alfonso—I wonder who disillusioned him so deeply?—insists to the men that, given the opportunity, their fianceés, two sisters, will betray them. Dubiously, the young men agree to test that theory for a wager.

Following Alfonso’s cruel plan and aided (for a bribe) by the sisters’ personal assistant, Despina, the men pretend to be called up to military service. The women are upset, and then the men come back disguised as hippies to invade the women’s house, where they proceed to intimidate, crowd, bully, even pretend suicide in order to break down the sisters’ resolve and make love to the wrong mate, egged on by Alfonso and Despina. When the men finally “succeed,” the sisters feel guilty, shamed and confused, the men devastated, furious and despairing. In the end, Alfonso’s scheme destroys the happiness of all four.

All of this is set to entrancingly lovely music, with arias galore for everyone. As usual with Seattle Opera’s productions, the singing is superb. The acting is excellent and all are a delight to hear: Sisters Marina and Ginger Costa-Jackson as sisters Fiordiligi and Dorabella; Tuomas Katajala and Craig Verm as their two young men, Ferrando and Guglielmo; Kevin Burdette as Don Alfonso and Laura Tatulescu as Despina.

In much of the first act, the two women proclaim their love for their men, then behave like over-the-top drama queens when said men go off to war. This is all rather queasy-making, particularly the laments when the men are called up. Enough young women have seen their men called up in recent years for that to be uncomfortable as a comedic scene.

The second act, full of pushy attempts at seduction, is also distasteful to watch, though the stage direction has clear indications of the ambivalence felt by all four. The men are reluctant to test their girlfriends but want to win the bet, and, well, these are attractive women. The sisters are essentially revolted by the idea, but vulnerable to pressure and encouraged by Despina to follow the old axiom ”When the cat’s away, the mice will play,” and well, these are attractive young men.

Musically, conductor Paul Daniel and the Seattle Symphony musicians gave sparkle to the effervescent score, though there were several times where singers and orchestra were not quite in sync.

The set, a very feminine boudoir, including a billowing, flesh-colored stage curtain, comes from the Royal Opera House. Lighting is by Neil Peter Jampolis (it’s clearly a sunny day in Seattle), up-to-date captions are by Jonathan Dean and costumes by Cynthia Savage. All lend themselves nicely to a production that achieves its aim. But is this an aim worth achieving?

The production continues through Jan. 27 at McCaw Hall.