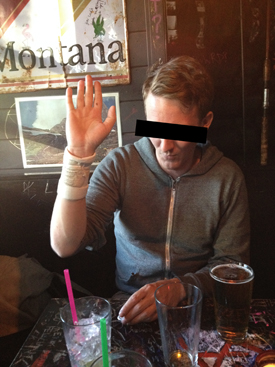 The craziest, wisest things come out the mouths of artists. Sometimes these gems aren’t fit to print in a longer context but are too good to not share. Here’s some such fragments—anonymous food for thought.

“Every hour I spend away from my studio, my project is getting one hour crummier.”

“He just hangs out with bros and makes bro art. He wears a lot of trucker hats now.”

“My Native American artist friend thinks Ann Hamilton’s The Common SENSE is racist. It’s such a cliché for a white person to appropriate and make commentary on Native artifacts.”

“The only reason people go to art galleries in movies is to talk in private because no one will be there.”

“This is the problem with a lot of the work being made in Seattle: It’s so Apollonian. It requires engagement with a hefty backstory and time spent to acclimate oneself with the dialog presented. I like the idea of some of these projects but I’m not usually moved by them in the flesh.”

“The Seattle Art Fair isn’t informing galleries whether they’ve been accepted to the fair until April. It’s insane. I think they’re waiting to see if they get any East coast blue chip galleries in the mix to raise the water level of the fair.”

“I’m interested in sampling the sounds that occur in my vagina when I put a mic up there.”

“I was asked to nominate someone for the [$12,500 Henry Art Museum] Brink Award, but I couldn’t think of anyone who impressed me last year so I didn’t bother.”

About a curator: ”She’s just, like, a plucky, intense, feminist vegetarian.”

About his career: “It’s like I’m always on the verge of orgasm, but I never come.”

“Can we have a moment of silence for ConWorks?”

“Don’t build a rectangular structure to house a feminist installation. Rectangles are patriarchal. Apart from a few formations in crystals, right angles never occur in nature. Even trees don’t grow at strictly 90 degree angles from the horizon. Right angles are man-made constructs forced on the landscape.”