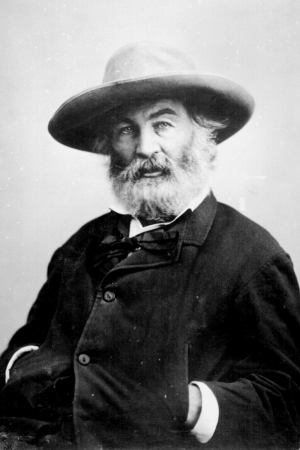 On Thursday poets Christine Deavel, Janie Miller, Adam Boehmer and James Hoch (replacing Ed Skoog) will read Walt Whitman’s “Song of Myself” as a part of the Unauthorized Readings series at Fremont Abbey. In preparation for the main event, we asked Deavel, Miller and Boehmer to share their experiences with the all-American poem, to see if Whitman’s magnum opus is really all it’s cracked up to be.

Do you remember the first time you read “Song of Myself”?
Janie Miller: I was 16 when I found a bruised copy at a book store in Kansas, and I flipped to “Song of Myself” because of its title. It’s opening lines: “I celebrate myself, and sing myself, / And what I assume you shall assume, / For every atom belonging to me as good belongs to you,” were empowering and transformative; a perfect antidote for a creative outsider in her teenage years.

Adam Boehmer: The first time I read “Song of Myself” in its entirety (beyond sections taught in school) was a decade ago in Ferndale, Michigan. I had just quit my job as the front desk person at a salon, and was taking myself seriously as a poet for the first time, getting my first rejection letters from journals and giving my first timid readings at community centers. I was also having my first sexual experiences and relationships with men. I stumbled across a very handsome edition of it at a used bookstore and bought it. I experienced “Song of Myself” as a sensual poem of fierce personal sovereignty, with a hovering exploration and galvanizing of America in that time period. It was also incredibly homoerotic. I saw it as unabashed proof of my people in early America: men who loved men, their wild country, nature and animals and spirit, and who joyfully fused them all together.

Christine Deavel: I had a great teacher in college who walked through it with me. I was, I think, delighted, confused, and enthralled by Whitman’s embrace. Later, when I’d started down an academic path I ultimately veered from, I read it as a kind of manifesto. It said what I had yet to articulate to myself.

Walt Whitman has been called the father of free verse poetry—do you think his work has had any effect on your own poetry?
JM: The energy driving Whitman’s poetry has such depth and authority, that it’s hard to imagine his lyrics not influencing a reader. His effect on me shows itself in both form and content. Formally, his insistence on being insistent is admirable. His lengthy line exudes energy and his use of parallel sentence structuring leaves me wanting to ring bells through the streets. My work is significantly different than his, but his energy and audacity have empowered my work.

AB: Absolutely. Listing and loving and figuring things out by traveling have been huge themes in my life and writing. I lived on the road for a year in a camper trailer and it felt very “Song of Myself” at times. And of course, nature and animals and men figure heavily in my subject matter.

CD: As I reread him now, I see how much he’s influenced me. His lists, his long lines, his parenthetical statements. I’m sure I gained courage from his open declarations of love for the world.

Do you have a favorite passage of “Song of Myself”? What does the passage stir in you?
CD: That’s tough. I will say that I’m at an age when I’ve lost a number of people. The closing lines always move me: Failing to fetch me at first keep encouraged,/Missing me one place search another,/I stop somewhere waiting for you.

AB: I really don’t think I can choose. At this point, I treat the book like a deck of tarot and open randomly to different pages to look for guiding passages. [opens book randomly] “Dazzling and tremendous how quick the sunrise would kill me.” That’s a pretty good one.

Are there any parts of the poem that rub you the wrong way?
CD: He can be a bit much, can’t he? Too much “I am you!” Sometimes I want to push him off. He’s like an emotional, dramatic, deeply caring uncle. But he is who is, and I love him for it.

JM: Whitman’s work is sometimes described as narcissistic, full of assumptions of our shared existence and overdone. But I have to argue contextually: Ralph Waldo Emerson called out for a poetry that was distinctively American. A new poetry that evolved from but broke ties from England’s historic lyrics, and Whitman stepped forth. He said that this was America, this is the spirit of this country and he never looked back. At that time, yeah, he overdid it, but he had every intention of doing so.

What do you think is the power of reading a poem like this (or any poem) out loud, as opposed to just reading it on the page?

CD: Oh, it seems so clearly meant to be read out loud. He made it so easy to read, approachably rich, compelling in tone and form. I’m quite fond of words on a page, that’s a more intimate experience, but reading them aloud makes for a kind of communion.

AB: This is a sprawling American poem. It is a spell for self-love, a test of and demand for faith, a poem alive with a figuring of what it is to be human in a young and wild country. Reading this poem (or any poem) out loud for me, allows me to inhabit that reality for a brief time

JM: Reading from Whitman’s “Song of Myself” will be a highlight of my poetry year. Performing the words of another writer’s work, especially that of an icon such as Whitman, is an act of gratitude and a reminder that the wisdom of great literature possesses a kind of eternal life. We can’t get Whitman, but we can get his life’s work. What could be better than that?

Adam, is your handsome beard inspired at all by Walt?
Absolutely, but its also inspired by Ted Berrigan, Sam Beam and beards I see on attractive men on Tumblr.