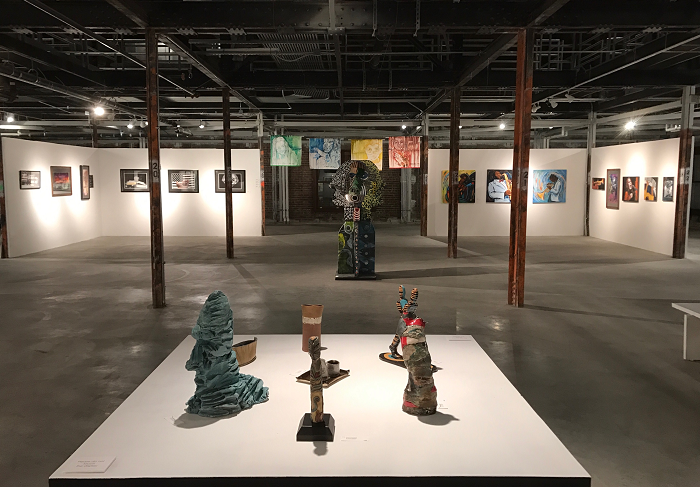 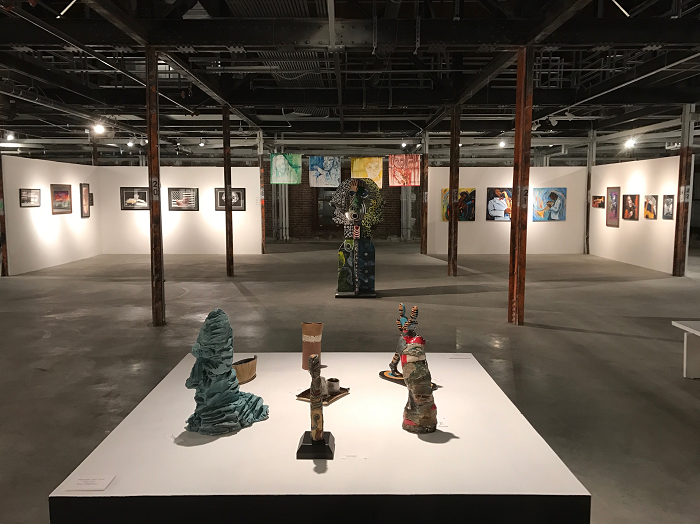 It’s a Sunday afternoon in January and I’m making my up the stairs up the stairs at King Street Station when I hear laughter and a saxophone, maybe Coltrane. I reach the third floor and step into the 17,000 square-foot gallery space for Truth B Told, the 12th annual exhibition by Onyx, an artist collective dedicated to visual artists of African descent in the Northwest.

Scores of paintings and photos hang on every wall, some suspended in the air by clothesline, some hung from the ceiling. Film projections, sculptures, live music, and vibrant installations are everywhere. A total of 150 artworks by 40 emerging and established artists across the Northwest were selected by a team of curators and jurors: Onyx board members Ashby Reed, Al Doggett, Earnie Thomas, Robert Thomas and guest curator Elisheba Johnson.

Disclosure: I have a piece in the show, but I’m at King Street Station to talk with Onyx president Earnest Thomas because I want to get a broader understanding of the purpose and vision behind the exhibition.

Thomas is so cool it hurts. He greets me wearing a black leather jacket and a wool skullcap, oozing joy as he describes shining light on artists of color.

This Onyx mission began 11 years ago when siblings Annie Hudson-McKnight and Robert Horton, now an Onyx board member, set out to curate an exhibition featuring local artists of color. They had recently attended a show of Black arts in Sacramento—and recognizing that there was nothing like it in the Northwest, they returned home and began laying the foundation for Onyx.

“[Onyx] started out with seven artists in an exhibit and has now grown to over 160 artists,” Thomas says.

Each work in this show reveals a personal truth, focusing on subjects like fallen heroes of Black history and police brutality. Egg tempera portraits by Jasmine Brown feature John T. Williams, Emmett Till, Trayvon Martin and others whose lives were tragically cut short. Yadesa Bojia’s chilling mugshot portraits show Black men who were charged with crimes based on the color of their skin.

True to the exhibition title, Thomas was keen on the artists communicating their experiences in the world, as historically he feels stories of the Black experience have not been told accurately.

“Going back historically, the majority community worldwide has been telling our story and some of the stories have been outright lies,” Thomas says. “The falsehoods were done to accommodate their interests. We want to tell it like it is, to tell our own story. When you’re telling it from your own mouth, nobody can dispute it. When you’re showing your own art, words can’t change that.”

King Street Station also presented new opportunities for Onyx, due to its huge size. “This is the first time that we could do installations,” Thomas says. He points out that the work voted Best in Show by a panel of jurors was Carletta Carrington-Wilson’s installation “Letter to a laundress” (above), which is composed of historic photos from the Library of Congress of African-American washer-women from the past two centuries. This piece was near to her as her great-grandmother was a washer-woman herself.