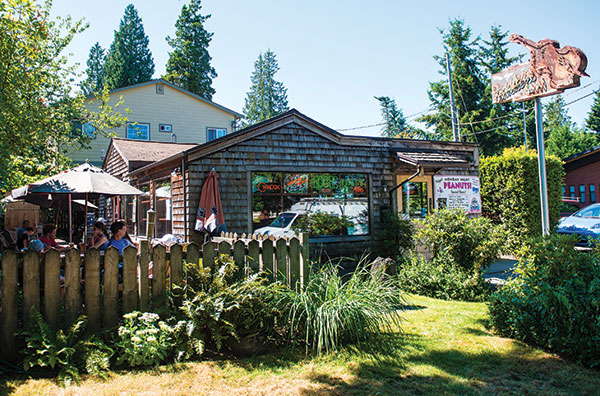 Fiddler’s Inn doesn’t have to try.

When is a tavern just a tavern? When it serves only beer and wine, no booze.

That’s how the law once defined the word. And for years, Seattle was a tavern town, proud to pour Rainier and Olympia—the microbrews of the day—and later, Red Hook. Decades hence, liquor enforcement has softened alongside linguistic standards, and these days calling your establishment a tavern is more a shortcut to picaresque rusticity than an indicator of the stuff behind the bar. As the city’s cocktail craze continues, the tavern and the pub (short for public house, the model of beer-focused hospitality launched in England eons ago), traditional bastions of come-as-you-are comfort, are losing ground.

Which is why you must head to the hinterlands to find a good one. For instance: Fiddler’s Inn in Wedgwood. Wedgewhere? Exactly.

Seriously though. As a Seattle enclave, Wedgwood is a newcomer, incorporated around 1945. Fiddler’s Inn predates even that; it won one of the first King County liquor licenses after prohibition ended in 1933. It sits on the corner of NE 94th St. and 35th Ave. NE, Wedgwood’s languid main drag. The rusted sign out front offers a beaten-up countenance to oppose the place’s unfailingly chipper moniker. You’ve probably never driven by because it isn’t on the way to or from anyplace you’d care to go—unless you live in Wedgwood.

Inside, Fiddler’s radiates an instant familiarity. It doesn’t feel new or old; it doesn’t strive for authenticity or innovation. It simply exists/exists simply. Its lack of ambition is a triumph. The walls are conspicuously absent a bunch of crazy crap, its ceiling is angled haphazardly, the result of renovations over the decades. It’s bright and airy and cozy and inviting. An outdoor patio lined with foliage nooks onto the south side of the building in sweet seclusion. Call Fiddler’s a pub or a tavern because it serves just wine and a very good, very local beer selection. Call it a café because it serves food—sandwiches and pizzas that are basic and wholesome and affordable and good.

The original owner was a guy named Walt Haines, a professional musician who moved to Seattle from the Midwest to play double bass—aka bass fiddle—in the 5th Avenue Theatre orchestra. The beginning of the Depression nudged Haines out of the music business and the end of Prohibition provided a new direction: Haines often entertained his patrons by playing musical spoons. After selling the bar in the ‘60s, he moved to LA and partnered with Lawrence Welk in a business that manufactured and sold musical spoons with a patented handle.

You can’t make this stuff up. But you can find further eyebrow-raising anecdotes about Haines and Fiddler’s at the Wedgwood in Seattle History website. Author Valarie Bunn interviewed Gerry Haines, Walt’s eldest daughter, who was six when her dad opened the bar and today, at 86, lives in Redmond.

History this deep and unlikely is part of what makes Fiddler’s remarkable. Another is living, breathing personality. On my first visit in June, I sat at the six-stool bar next to a guy named Mattie who regaled me with a fair amount of lore, some jiving with Bunn’s research, some suggesting an alternative narrative, including an “accidental fire” that led to Fiddler’s being completely rebuilt in the ’90s, finally adding a foundation and reusing original materials for the interior. Affable, heavy-lidded and unhurried, Mattie reminded me of Northwest natives I knew at the University of Oregon.

I discovered later that Mattie is a bartender and cook at Fiddler’s and that the current owners also run the Latona Pub in Greenlake and the Hopvine on Capitol Hill. The thread between establishments: neighborhood-centric, beer-forward, long lived-in. Ideal for a simple Saturday, if you like that sort of stuff.