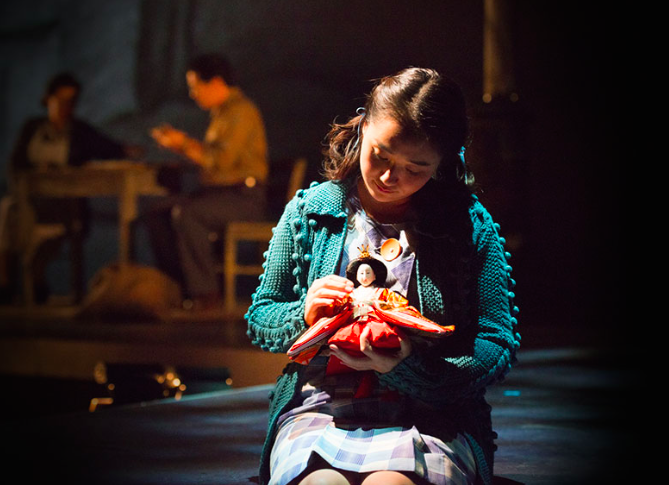 It’s a triumph! It’s riveting. It’s unsettling and uncomfortable. It’s strong. For many it will be emotional. It’s an Experience with a capital E. Go, go, go now and get your tickets for An American Dream, the new opera commissioned by Seattle Opera about our history, our experiences here during WWII, understood through lives displaced and disrupted through no fault of their own. Take the (teenage) kids. There is only one more performance—there were only two planned—this Sunday afternoon, but let’s hope it is presented again soon. (It’s intended to travel, around the state, out of state, wherever it is invited.)

The idea of the opera was conceived by Sue Elliott, then director of education at Seattle Opera, who asked for stories from the community answering the question “If you had to leave home today and couldn’t return, what would you take with you?” (The question is all the more poignant today with current stories of families fleeing homes burned by wildfire.)

From the dozens of stories, Jessica Murphy Moo wove a libretto of a Japanese legal immigrant family in 1942 forcibly relocated to a detention center from their prosperous Bainbridge strawberry farm, and the farm sold with little choice at breakdown value to an American veteran and his German Jewish wife. Forced to burn all their Japanese belongings, the American-born daughter hides her precious doll instead, and keeps a letter addressed from Germany to the wife. She in turn is agonized about the fate of her parents in Germany, and she finds the doll, her husband ordering her to burn it, which she doesn’t. Fast forward to postwar 1945, and Setsuko returns, hoping to find her father. Eva, the wife, returns the doll, the girl proffers the letter, which details the death by shooting of Eva’s parents. At the end the Japanese father returns. Here the opera ends, but there can be no happy ending for the two families.  Who now owns the farm? Who will be uprooted again, German Jew, or Japanese family? Who loses?

The music is by opera composer Jack Perla, an atmospheric score which surrounds but never overwhelms the voices, which are fully up to Seattle Opera’s usual high standards with all but one singer new to the company’s stage. Bass Adam Lau as Papa Kobayashi, mezzo-soprano Nina Yoshida Nelsen as his wife and soprano Hae Ji Chang as their teenage daughter Setsuko, with D’Ana Lombard as the German Jewish wife, Eva, and former Young Artist baritone Morgan Smith as the American veteran Jim, all are compelling in their acting, excellent in their singing. Peter Kazaras directs, with a spare set by Robert Schaub, video design setting moods and place by Robert Bonniol, and costumes by Deborah Trout. Judith Yan conducts a chamber orchestra in an admirably well-paced performance supporting but never overwhelming the singers.

The whole is taut, the entire opera is only 67 minutes, but what surrounds it is equally compelling. Two hours before curtain, fascinating videos of elderly camp survivors talking of their experiences and their very normal lives here before the war as well as during it, take place in the McCaw Hall lecture room. Simultaneously, all through the McCaw lobbies on the first two floors are photographs and posters, some discomfiting, showing the fear and hatred of “Japs” bolstered by the government decisions. There are posters of the camp rules and government proclamations regarding them, and a mock-up of an internment camp room expected to hold an entire family. Almost entirely, this is about the Japanese experience here, not about the systematic Nazi extermination of Jews from which Eva, the wife, had escaped, brought to be safe here by her American husband.

Before the opera, three survivors spoke briefly on stage, including 96-year-old Kay Sakai Nakao, Lilly Kitamoto Kodama and Felix Narte, Jr., then a small child whose Philippino family took care of the Kitamoto farm.  And after the opera, Seattle Opera general director Aidan Lang held a talk session with audience and the creative team.

The whole was a tour de force, which must return, soon.

I have two quibbles. Why is Jim the veteran living here during the war instead of being in the forces? If he’s a veteran of WWI he’s much older than the man portrayed in the opera. The other is the print in the program. Many people will need a magnifying glass to read it, including most of the elderly who will flock to see this production.