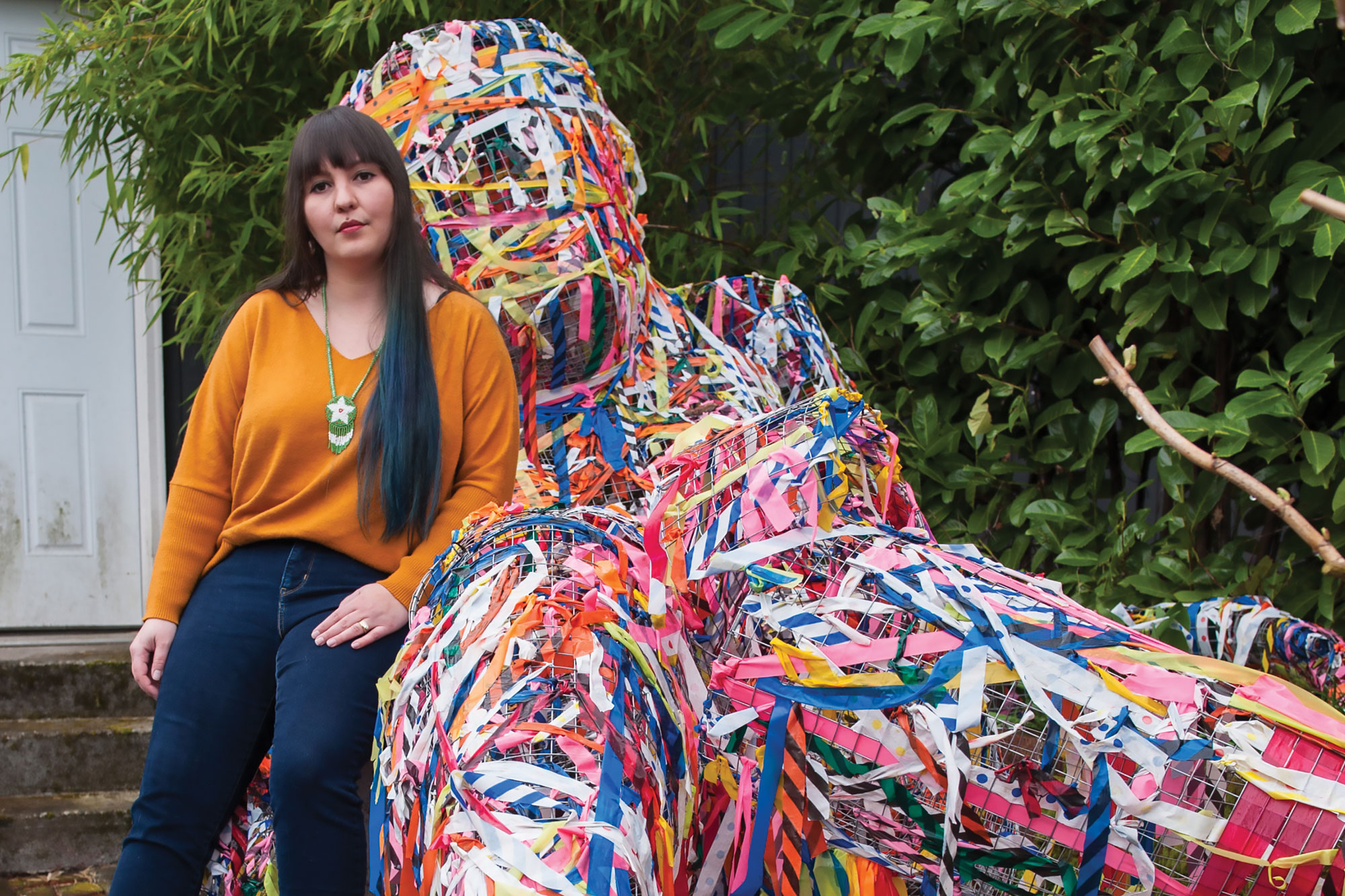 RYAN! Feddersen outside her studio with her 2016 sculpture “Reclining Figure,” made with steel rabbit fencing and flagging tape. Created for the Seattle Mini Maker Faire, the work brought “the specter of a woman to a largely male dominated DIY culture, and forced the audience to recognize her,” Feddersen says. Photo by Bruce Clayton Tom

Last summer, heavy heat filled the air of King Street Station’s upper galleries, posing a particular problem for RYAN! Feddersen, who was showing a large map of the United States called “Kill the Indian, Save the Man,” made with thermochromic ink. The painting was meant to reveal a long list of “Indian Boarding Schools” when visitors rubbed the dark strips obscuring them.

The producers of the show, BorderLands, considered using bags of ice to cool the paint. They installed a row of fans, to no avail. The ink still showed, uncensored, a survey of Indian Boarding Schools operating from 1850–2017, where Native American children were often forcibly sent as part of a U.S. attempt to “discipline” their language, beliefs and dress out of them.

To Feddersen, this was unfortunate. Interaction by visitors wasn’t just part of the work, it was the work. Feddersen wanted BorderLands visitors to physically unveil a cultural genocide still largely obscured from history, with their own hands.

On a bitterly cold day in February, Feddersen faces the opposite quandary. Thick wafers of snow descend on her Tacoma backyard, where the chill seeps into a former RV garage that remains unheated while Feddersen converts it into her studio. The artist rubs the black lines of a panel from “Unveiling the Romantic West,” spread out on a table.

“It’s too cold to reveal what’s underneath,” she says, shivering in her thick, wool-lined coat. The panel only shows its upper layer, a stenciled black-and-white replica of an Edgar S. Paxson mural depicting the signing of the 1855 Hellgate Treaty, which required the Bitterroot Salish, Pend d’Oreille and Kootenai tribes to relinquish their territories. Like “Kill the Indian, Save the Man,” the work reveals a counter-narrative when rubbed—a substratum of Salish designs, brown camas and bitterroot flowers, eagles and fish, while the mouths of the indigenous leaders disappear into blank space.

“This [layer] adds an indigenous perspective to the official version of history,” she says. “Without an adept translator, they were silenced.”

Much like the stylization of her first name—a diversion for anyone wondering about its gendering—Feddersen’s work is a bold exclamation. Her increasingly political and pointed installations, drawings and sculptures grapple with climate change, consumer culture, gentrification and white supremacy, exposing stories long obscured.

“Unveiling the Romantic West” was one of Feddersen’s many large-scale installations, murals and sculptural works shown across the Pacific Northwest and beyond last year. From a sweeping group exhibition in Denver to intimate gallery exhibits, a large museum show in Missoula, three residencies and a move from Seattle to Tacoma, Feddersen’s career is increasingly taking her to new places—and new heights. She’s still producing drawings and smaller sculptures, but her installations are swelling in size and ambition.

So far, 2018 is shaping up to be a seminal year. “I’m blown away by what this year is going to look like,” she says, hugging a mug of tea in her living room. In the months ahead, Feddersen will have solo shows in Santa Cruz, Spokane and Wenatchee, curate two museum exhibitions, create new work thanks to a National Artist Fellowship with the Native Arts and Cultures Foundation and serve as lead artist for Public Art: Public Action, a Tacoma-based public art and community engagement training for artists. She’ll install her first large-scale permanent public installation, “Nexus,” along the Prairie Line Trail in Tacoma this spring: a covered shop-cum-classroom where people can learn about the trade between coast and interior Salish peoples, such as the Okanagan and Arrow Lakes from whom Feddersen descends.

A member of the Confederated Tribes of the Colville Reservation, she grew up in Wenatchee, a small city on the confluence of the Columbia and Wenatchee Rivers. Thanks to irrigation techniques and hot, arid summers, the city flaunts its reputation as “Apple Capitol of the World.” Feddersen paints a less Arcadian picture, of a city built on a pesticide-filled orchard industry and now, by extension, a thriving health care industry.

As a teenager, she felt it was a cultureless place. She desperately wanted to get out. She did occasionally, on trips to Seattle with her mother, who sold vintage clothes in the city. Feddersen wore second-hand garb in often outlandish styles and clashed constantly with authority figures. She was penalized for participating in student protests. “I was a bit of a troublemaker,” she says.

One with a mission. At age 11, she wanted to become a lawyer. Make a difference. Art classes, the internet and the work of her uncle Joe Feddersen—a famous Colville printmaker, glassblower, weaver, photographer and mixed-media artist—changed the teenager’s mind.

At 19, art proved her ticket out of Wenatchee. She decided to try to make it as a painter and moved south to attend the California College of the Arts in Oakland. But the school’s focus on commercially viable work left her disillusioned.

She found the sincerity she was looking for at the Institute of American Indian Arts in Santa Fe, NM. Feddersen still remembers her first class there, which changed her life.

“There’s no word in any indigenous language that means art,” her teacher, the late Ed Wapp, told a full class of wide-eyed students.

“At first, I was upset,” Feddersen says. “But he was making a wider point: The Western art tradition is very artist- and object-based. Artworks are elite things you’re not supposed to touch but pay a lot of money for. Indigenous art practices are community-based. Artworks are things that you use in rituals, share with family and community.”

Her time at IAIA proved life-changing, but Feddersen missed her own community. So the homesick 21-year-old returned to Seattle, where she worked as a studio assistant for artist Norie Sato and studied fine arts at Cornish College of the Arts, from which she graduated in 2009. Later, she worked as an arts administrator for 4Culture while creating life-sized color-by-number rooms for the Henry Art Museum and Bumbershoot. 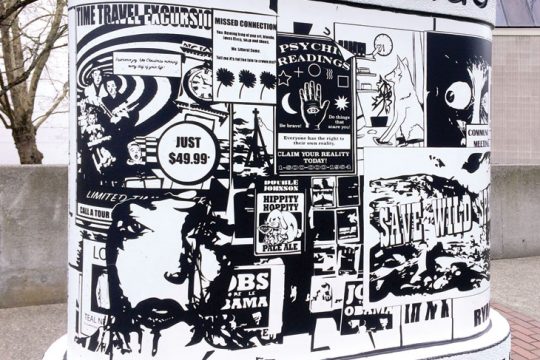 “Happenings,” a former derelict Kiosk transformed into an artistic bulletin board in Tacoma;

It was only in the summer of 2015, while traveling between Spokane and Seattle, that Feddersen realized she could no longer juggle being an artist with her day job at 4Culture. Balancing those two schedules meant making multiple trips to finish “900* Horses,” a large-scale installation that memorialized the estimated 800–1,000 horses stolen from Native peoples and killed under orders of U.S. Army Col. George Wright in 1858. For two sweltering weeks, Feddersen stenciled the outline of 1,000 horses on the concrete of the Tribal Gathering Plaza at Huntington Park in Spokane, so visitors could color them in with chalk pastel. Six months later, she made the leap to a full-time art career.

On a recent day in February, she’d come full circle. Feddersen faced a group of around three dozen artists during the Office of Arts and Culture’s annual Public Art Boot Camp at Seattle Center, where she was giving a talk on sociopolitical public art. Standing on a modest stage, she described how U.S. Army soldiers killed the horses on the banks of the Spokane River during a three-day-long massacre.

“That’s how long it takes to kill 900 horses,” she added caustically, jumping to a slide of people coloring in the horses under a bright sun.

A summer rainstorm washed away the pastel of “900* Horses,” making Feddersen’s largest public artwork to date also her most ephemeral. Still, the memory of the memorial, a new history, was now dyed into people’s brains. “Art should be a community service, not a commodity,” she says. “I strive to critique and bolster our world, not just decorate it.”

That’s what tricksters do, she explains. “I want to be a trickster for good, just like the Coyote. The Coyote is a totemic figure to me, an archetypal model for my art practice,” she says, stroking the edges of an engraved silver Coyote pendant made by her sister, a metalsmith. “He’s the trickster hero of the Plateau people. He’s very lesson-oriented through funny and sometimes disturbing tales. That’s what I want to do as an artist: Create satire with purpose.”

Coyote is the main character in Feddersen’s evolving series “Coyote Now,” a black-and-white graphic novel on Bristol board that visitors can color in. While creating an early chapter of the series, Feddersen was reading Coyote Stories, a 1933 collection of quasi-timeless oral Coyote folk legends, written down by Mourning Dove, the sobriquet of Native American author Christine Quintasket.

Time is much less ambiguous in Feddersen’s telling, wherein the anthropomorphic Coyote roams through an urban landscape. He sits on a bus and reads his iPad while wondering how to disconnect from society, and even realizes he might be responsible for climate change.

Usually, Coyote’s humane hubris leads to his death, but Plateau lore always gives him another chance. He can be resurrected by his cousin, Fox, who just needs one of his remaining whiskers or bones to bring him back to life. In her version of the story, Feddersen alludes to Coyote’s resurrection by letting visitors color in the lines of the drawings with coyote bones fabricated out of crayon wax: They help bring these stories, like Coyote, back to life. By bringing Coyote into the white fortress of hegemonic institutions, Feddersen gives these stories the authority they were often denied. Most importantly, she allows them to continue, to grow, despite attempts by institutions, artists and the government to artificially freeze Native culture.

Feddersen has found herself having to answer to curators questioning whether her work will be “too Native” or “not Native enough,” as opposed to “contemporary”—as if art made by Natives were a relic of the past. Talking about this, her eyes become darker, her sentences edged.

“As one of many mixed-race, Native people from a semi-urban environment, I was raised within an [American] culture that largely pretends Native people as a whole, and mixed people like me, don’t still exist.”

Late this summer, Feddersen will exhibit her first curatorial project, In Red Ink, a showcase of recent work by more than 20 contemporary Native artists at the Museum of Northwest Art in La Conner, Wash. With it she hopes to dispel stereotypical ideas of Native art practices. She’s also co-curating the Northwest exhibit with six other artists for the reopening of Seattle’s Burke Museum in 2019.

In the meantime, she’s going back home. For the first time since leaving for college, she’ll show work in Wenatchee this month, including large-scale prints, a sculpture and an interactive “painting,” as part of a solo show at MAC, the new art gallery at Wenatchee Valley College.

“It’ll be strange,” she says. “Growing up, there was this perception, with the exception of my art teachers, that I wasn’t going to make anything out of my life,” she says, quieter. “So it’s strange, coming back and being…an artist. Successful, maybe. Or just something.”

Correction: This article previously stated that the Public Art Boot camp was produced by 4Culture when it is in fact produced by the Seattle Office of Arts and Culture.