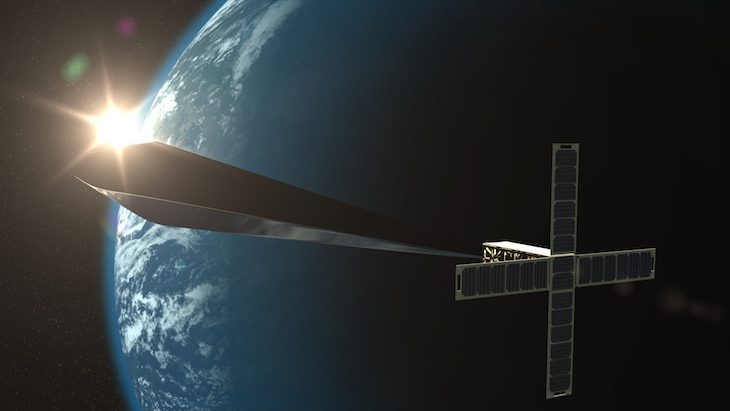 “This,” I announced excitedly about the silver filament hanging from CenturyLink Event Center’s ceiling, “will be shot into space.” It was the opening night of the fourth Seattle Art Fair. As I continued to explain that the airless mylar would inflate once in orbit, art collectors and artists buzzed with excitement all around. But how exactly would this thing work? How would it be pressurized? We had no idea.

Lucky for us, Berlin-based American Trevor Paglen—an artist who exposes the infrastructure of mass surveillance in his photos, drawings and sculptures—was in town for a public talk at the fair. “What makes a balloon inflate is not the volume of air,” he said, standing near the sculpture, titled “Orbital Reflector.” “It’s the fact that you have more air pressure inside than outside. As there’s almost no CO2 in space, you only need a small amount of it to inflate a large structure.”

When I sat down to talk with Paglen about the ambitious project—slated to be shot into space this fall—he explained that, no, the inflatable wouldn’t look like a sausage as it did now. After experimenting with a giant sphere, he settled on a diamond shape. A diamond shape, he explained, is more aerodynamic and makes for a larger surface to reflect light from, making sure the sky sculpture will be visible from earth with the naked eye after twilight and before dawn.

The work, which is being produced for and with the Nevada Museum of Art, is not a publicity stunt for Paglen’s solo show at the Smithsonian American Art Museum. Nor is it a gimmick: “A lot of what I do is think about the politics embedded in different kinds of infrastructures or technologies,” he says. “I wondered: Can you make a satellite that is the opposite of any other satellite?”

In what sense?
A significant number of satellites are military satellites, for reconnaissance, missile targeting, communications or eavesdropping. A huge amount of objects in the sky are devices that are about the ability to project [political] power around the planet.

Yours will have, as you’ve said, no commercial, scientific or military purpose. Is the purpose then for it to not have those purposes?
Right. And to be seen.

Why is that important?
It’s like going to a museum: You see tons and tons of images every day. In a museum you look at them differently. A sculpture in the sky asks you to look at the sky in a different way. Maybe you’ll wonder: What is this sphere of technological stuff encircling the planet, and what’s the effect of it?

The project costs $1.4 million. Do its intentions warrant this?
Yes, you could ask: “Why are you spending all of this money on a sculpture when you could feed the poor?” But you can’t really. You raise money for a specific project—not for the other. Also, artworks are not really where the surpluses of our society are going.

Now that you mention Tesla: Your satellite will be launched off a SpaceX rocket, right?
Yes. I’m not a fan of SpaceX. But we needed a ride and you either go with SpaceX or with the Russians and both are…complicated. [laughs]

You brought up Amazon and Tesla, whose CEOs are among a growing group of billionaires investing heavily in space. What’s your take on the billionaire’s space race?
There’s been a lot of hype about civilian space projects and, honestly, I think it’s bullcrap. These companies are military companies. SpaceX is not creating an industry out of nothing. It’s competing with Lockheed Martin, with Boeing. It’s a defense company. [These companies] make a big show out of their commercial stuff. But at the end of the day, space has always been and always will be military.

In that environment, your “useless” satellite is almost revolutionary.
I use the same tools [as they do] to try to point to the opposite way in which those tools can be used. But it can never be clean. It has to go on a rocket. And rockets were created to launch nuclear missiles. I work within that infrastructure to point to something outside of it.

Even though it is a poetic gesture, is it not similarly hubristic, some form of space colonization?
That’s something I struggle with. But to me, the project is a really a sand painting. An incredibly intricate, labor-intensive project that will briefly exist and then burn up. And it will not have made anyone any money. It’ll just be a thing to look at in the sky.

You’ve been working on artificial intelligence-related art. Could you talk about that?
I’ll explain it with the example of a self-driving car. It uses cameras to take images, and then a computer vision algorithms are interpreting those pictures in a particular way that allows the car to navigate. The system’s designed to interpret photos. I ask, what is the politics of that interpretation?In the case of facial recognition, this is technology that states will use around the border, for military purposes and so on. You can think about facial recognition as a technical system. I think about it as a political system.

This is particularly relevant in Seattle with Microsoft and Amazon. Both companies work on facial recognition and both companies provide services to ICE, for example. Did you think about that?
Very much. Amazon in particular: Facial recognition is a big thing they’re working on. What you’re seeing with Amazon is that some parts of the company are like Boeing or Lockheed Martin. Their retail part is more like Walmart, and then there are other parts which are more like Microsoft, and another that resembles the NSA. The point is that these are companies with massive global footprints that primarily service the most powerful actors on the planet and, in doing so, are among the most powerful actors on the planet.

Does this realization scare you?
It upsets me but it doesn’t depress me. It’s part of what I do as an artist. I see what the world around me looks like, and try to develop tiny glimpses of what alternatives of that world might look like. If an artist has one job, it’s that.