“Many people would say my family was not notable, their story not rich—maybe not worth being told,” says Seattle-based artist, poet and educator Storme Webber. She smiles. “But they enriched the culture by their presence.” Webber is standing near a large, white kayak carrying seal skin, wolf skin and medicinal plants. On a draped blanket sit two pairs of miniature mukluks that would have fit the tiny feet of her grandmother and grandaunt, both Suqpiaq (Alutiiq), still small children when they were brought by their father from Seldovia (Alaska) to Seattle in 1929.

The kayak—the centerpiece of Webber’s first museum solo exhibition Storme Webber | Casino: A Palimpsest, currently on view at the Frye Art Museum—symbolizes their journey. It’s also, much like the show, an altar honoring Webber’s ancestors: Sugpiaq women from Alaska and Black and Choctaw women from the South, their history inextricably knitted into Seattle’s fabric. It’s a highly conceptual yet extremely personal exhibit, featuring poems and archival photos from Webber’s own collection, and it was decades in the making. Webber calls it “an experimental memoir.”

The prologue to the exhibition unfolds in the hallway ushering visitors toward the central galleries and the heart of the show. Mounted in the hall is a large blow-up of a sepia-washed photo of the Seattle harbor from the late 19th century entitled “The Venice of America.” In the image, canoes cut wrinkles in the water perpendicularly. Sailboats cut a path that separates the canoes from the bustle of the pier above. From the vantage of the canoe—where the image was captured—the heart of the city unfurls: Washington Street and downtown Seattle.

It’s what we know now as Pioneer Square. In the early 20th century it was known as “Skid Row” and was a haven for many marginalized inhabitants. From the economically disadvantaged to displaced Natives, gay servicemen, lesbian mothers, achnucek (Two-Spirits), butches and drag queens, Skid Row havens such as the Double Header bar and the Casino Pool Room welcomed a community of “outsiders” at a time when sodomy was prosecuted. In these rare sanctuaries, same-sex dancing and drag shows were allowed thanks to patrons paying off police.

“It was a symbol of a safe gathering space before the word even existed,” says Webber. “As much as it is a history, it has also made me think about the future of Seattle, who is part of the city’s fabric, and who is not a part of it anymore—or can’t afford to be as it’s hyper-gentrifying. Do we really want to have a monoculture?”

Webber, who is Two-Spirit, has never danced (only dined) in the Casino after which she named the show. Some members of her family have, among them her mother, who came out as a lesbian at a time when that was illegal. In a corner of the gallery, she pays homage to their “pre-Stonewall culture,” her mother and “butch stepfather” sharing the walls with snapshots of her handsome, bisexual father.

Women have played a major role in Webber’s upbringing. The walls read like an ode to matrilineage and the women who nurtured her. On reproduced archival photos in weathered black-and-white and warm sepia, bleached Polaroids, they smile, party, cuddle cats, sit in front of pianos or stare into the distance. Some glances are impenetrable.

One triptych is particularly arresting: In it, Webber’s young grandmother smiles a slight, melancholic smile; short, curly bangs frame her bright-eyed face. Reminiscent of Warhol’s Marilyns or tests of different Instagram filters, they each are printed in a slightly different sepia tone. Her grandmother, and women like her, weren’t famous like Marilyn. As brown women, nobody was taking their picture. They had to take their own self-portraits—an act of subversion and a means of declaring sovereignty—in photo booths.

The presentation of these images deliberately and subtly offers up a puzzle. Rather than grouping these personal photos chronologically, Webber opted for a dash of confusion over spoon-fed enlightenment. Revealing only who these women (and some men) were in relation to her, the personal family photos do not so much expose a genealogy as challenge the visitor to fill in the historical blanks.

We’re left with some clues, though. The titles of her works hint at a shared musical lineage. With a refusal “to be moved” as in the Civil Rights Movement protest song. With a love of blues and jazz, of walking through heaven with you, Billie Holiday, Ella Fitzgerald and Ray Charles. The music, even if only in our heads, is the show’s beating heart. It sings to you that there’s no answer. Just variations on a theme.

As such, the show morphs into a more conceptual exploration of the unknowability of history and the problems of photos and archival records, such as old King County records of the Casino and Double Header. Who records, who writes it down, and what is left out? Whose history has been overwritten, like the palimpsest in the show’s title, a term for old parchment manuscripts whose text was erased and overwritten but later rediscovered? Some histories, the show demonstrates, even when erased or long-thought forgotten, will reappear if you look hard and if you let it. 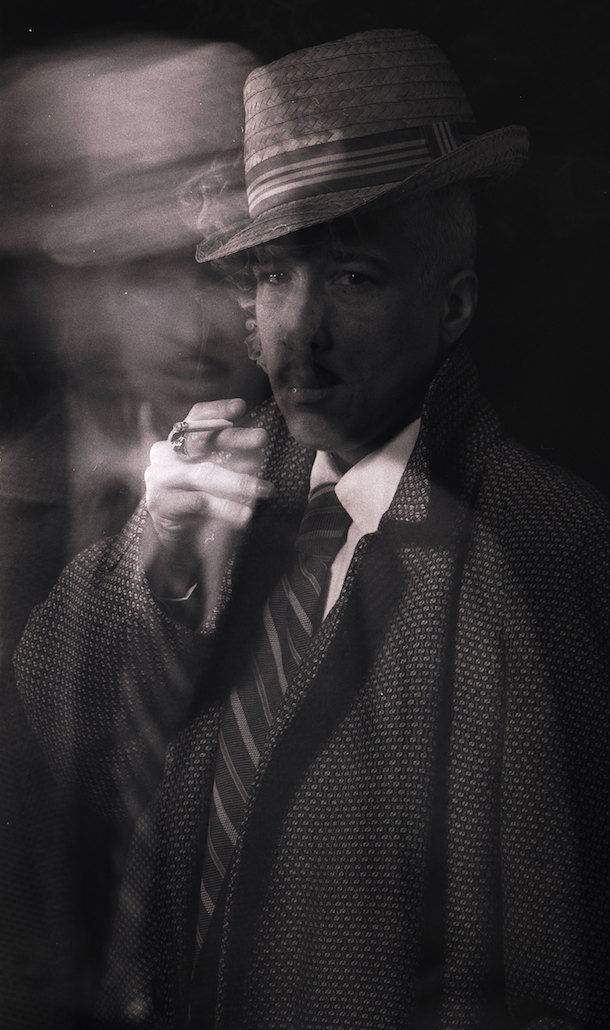 “This show is a love song to the Ancestors and their “ferocious loving resistance to erasure,” says Webber. That’s why it’s a transformative experience. Not just for her. She hopes it transforms the visitor too. Her poem “Indigenize This Gallery”—the text of which spreads out across a wall—asks visitors pointedly: “honor this dimensional story / take away only memory / no photographs or video / no theft or commerce / decolonize our relation / transform yourself.”

Writing about this is easier than doing it, I notice. I—cis, white—am standing next to Webber, trying to pinpoint who in her family meant what to her, asking her to explain the uniform of her grandmother and whether she’d say her father, happily smiling into the camera, was “cross-dressing” or “in drag.” I was awkwardly trying to chisel into words an experience foreign to me in many ways.

It’s only moments later, with nothing but Webber’s soft voice surrounding me in the black box with her poem “I Cover the Waterfront” blasting through speakers, that I fully comprehend her hesitation: “Walk the shoreline with me,” she recites. “Don’t ask questions don’t try to collect me for your mansion. Please. Just listen and be.”

Storme Webber | Casino: A Palimpsest runs through Oct. 29 at the Frye Museum. Webber will be teaching workshops and perform at the Frye in September. More info on fryemuseum.org.