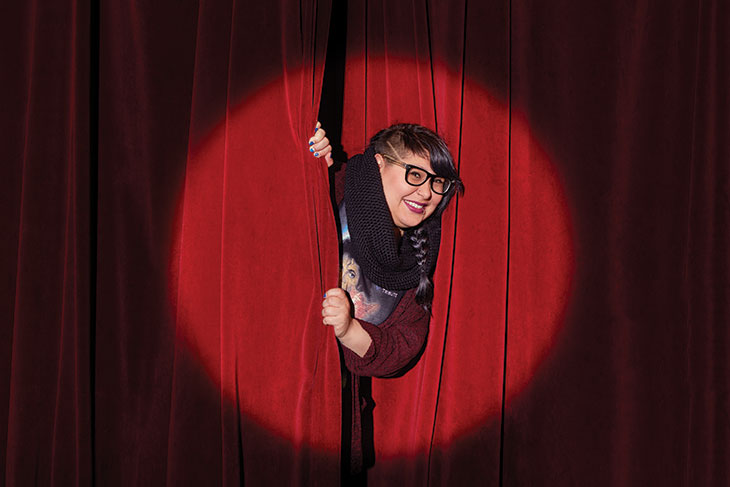 Elicia Sanchez has gotten a lot of shit in her career for not doing comedy the “right” way. Her style is heavy on rants and hilarious stories from her own life—the time she got kicked out of Jimmy Buffett’s Margaritaville was her closer for years. Spontaneity is important to Sanchez, but can rub people when they’re looking for one-liners. Sanchez—who’s featured for big-deal comics like Bridget Everett, W. Kamau Bell, Wyatt Cenac and Hari Kondabolu—is done with people who’d tell her to change.

“I used to feel really insecure about the way I did standup,” she says. “But the way I delivered joke jokes was so apathetic that you could tell I wasn’t interested. Once I realized that telling stories is my voice and works for me, I realized that’s what I should do all the time.”

Sanchez grew up in small towns around Washington (which she hated) before landing in Olympia (which she loved). As a little kid, she watched standup specials with her dad—Flip Wilson, Steve Martin—but the person who first inspired her to do comedy was Elvira. “I wanted to be as funny as she was, just be myself and make fun of movies,” Sanchez says.

And she did. In 2010, Sanchez started The Enematic Cinematic, a podcast wherein she invited comics to get drunk and watch terrible movies with her. She started doing standup so she could feel more legit on her podcast bio—and because a fellow comic dared her to. She did three minutes at the Comedy Underground, and didn’t stop for years.

Sanchez rarely has time for open mics anymore. She performs three to five nights a week and co-produces three monthly shows: a live version of The Enematic Cinematic; a late night variety show called Not Too Late with Elicia Sanchez; and Wine Shots: Comedy’s Happiest Hour, an exclusively female comedy show. She also stage manages the female-focused show Comedy Womb, books comedy at the Rendezvous and sings in a Michael Bolton tribute band.

Sanchez considered quitting comedy a few years ago, when Lindy West’s explosive takedown of rape jokes led to serious harassment and divided the local comedy community. “The atmosphere was hostile, and I was like, if comedy isn’t fun, why would I do it?” Sanchez says. “But then I thought, if I quit, then they win. There weren’t a lot of queer fat women of color doing comedy, so I needed to not let people scare me off.”

Today, Sanchez says things in the Seattle comedy scene are somewhat better—more women, people of color, queer people and trans people doing comedy. But there’s still a long way to go, and Sanchez will keep pushing forward. “I just try to normalize stuff, and talk about things like my queerness and my fatness in a way that should be relatable to everybody.”