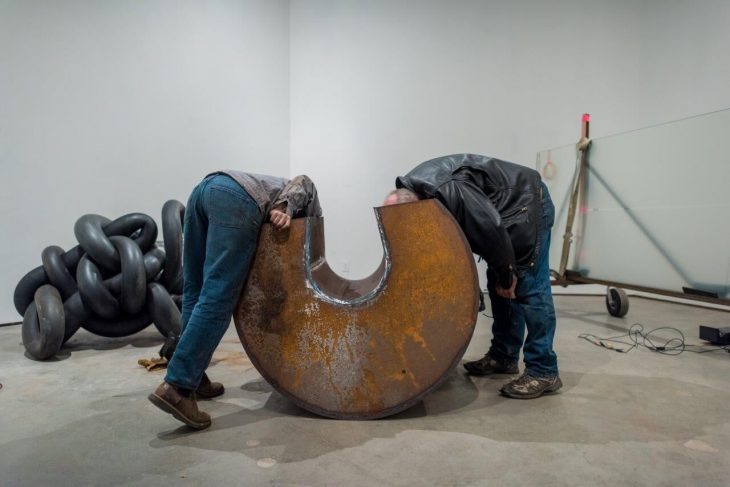 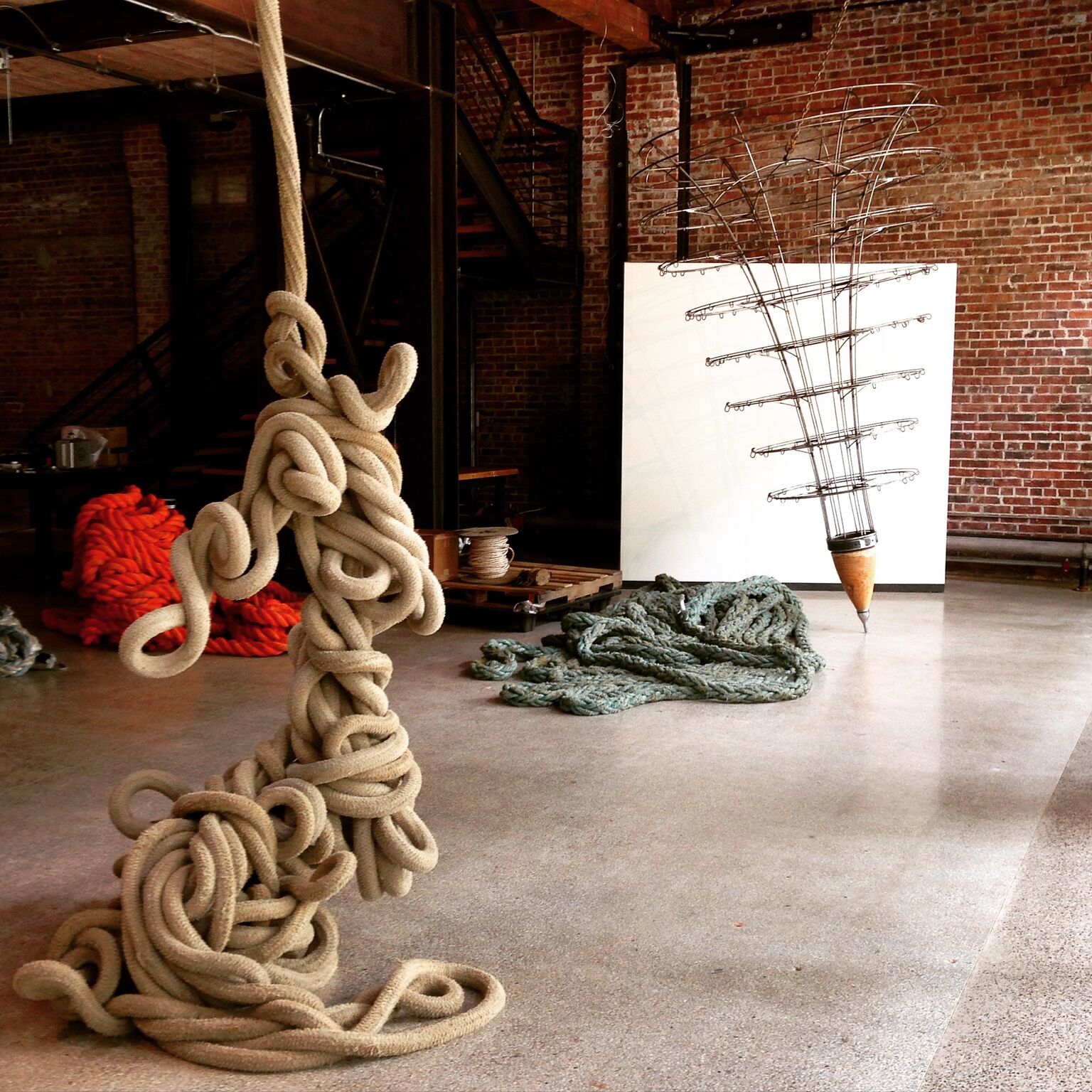 At MadArt, a large exhibit space and artistic laboratory in South Lake Union, three artists have come together to play hard in an exhibit called Portfolio of Possibilities. The team is made up of Aime McNeel and Mark Zirpel, who have both taught sculpture and glass at UW for the past decade, and Sam Stubblefield, who blends traditional mediums with film, sound, live data and other digital tools. Though they’re colleagues at the university, this is the first time McNeel and Zirpel have worked together. For the past four months, and with Stubblefield’s added wizardry, they’ve produced a maelstrom of controlled chaos that brims with childlike abandon.

Photos don’t do justice to the sheer amount of visual overload these pieces generate. Upon entering, one is first transfixed by a monster of a piece that looks like a spinning top made of concentric steel bands. It’s moored to a motor in the ceiling and, when triggered, starts to gyrate, pulled in alternating directions by its own weight. Steel balls run along the bands, which are actually tracks made of dual rods. They clatter and clack and spin round and round, casting mesmerizing shadows against a screen backdrop. Nearby, a much smaller steel sculpture in the shape of a horseshoe balances on the floor. It’s hollow inside, fitted with speakers. When gently rocked back and forth, it sets off a recording of whales that are eerily amplified—an underwater howl. 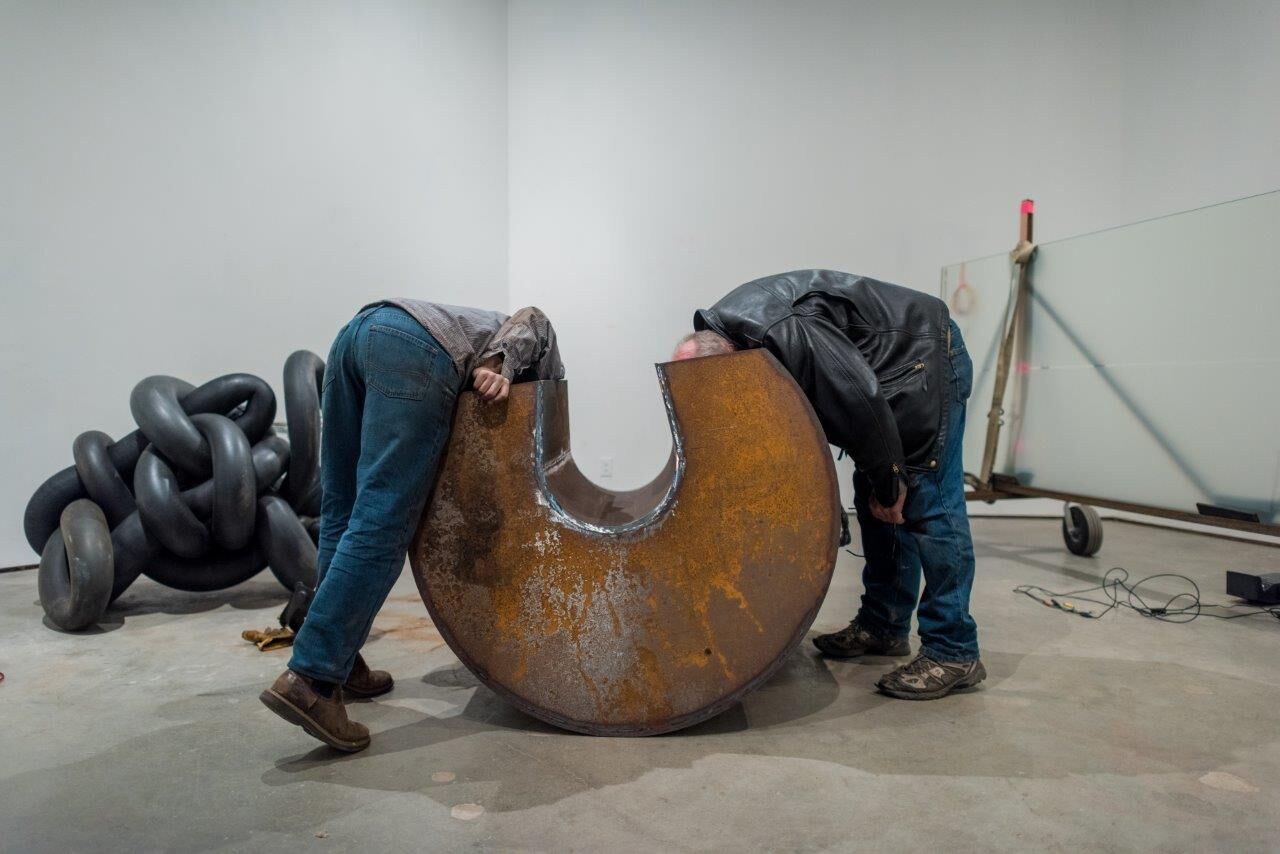 Suggestive juxtapositions of curious detritus litter the place like something out of a Surrealist textbook. A series of anvils is entirely useless in one way or another: One is cast in translucent amber rubber, another in plaster. A third cast in plaster has been rubbed with shimmery graphite powder so that it glistens like steel. There’s a plastic swordfish in dialogue with an antique wooden rudder, the edges of which have been rubbed and worn, positioned arbitrarily to each other on the floor. Old buoys the size of beach balls are attached to propellers, artificial limbs and other oddities.

Adhering to a theme of celestial-meets-oceanic, all things in the space originate from some sort outer-space or underwater source. In one way or another and often literally, they work in concert, objects grinding, making music or clattering with a frisson of material set in motion by external sources. At the center of the cacophonous splendor, operating like a central nervous system that controls the many phantom limbs and breathing, pulsing, leaping objects, Stubblefield is surrounded by speakers, iPads and all kinds of gadgets receiving or feeding information to the sculptures. Each of the kinetic pieces is set off by either one or multiple sources of digital triggers from inside MadArt or beyond, including data from NOAA and NASA and keywords scraped from Twitter in real time.

One of the most invasive pieces in the lab is a very long length of slack rope that seems to have no end. It coils and winds around all the other objects and the central computer set-up, thick and sinuous as a boa. The visible end is attached to a motor mounted on a beam in the rafters. As it turns, it slowly twists the rope. As the minutes pass, the tension in the material increases; it becomes taut, rigid, then suddenly seizes up on itself, tangling into terrifying, compounding knots that look ready to whip loose and break the building. 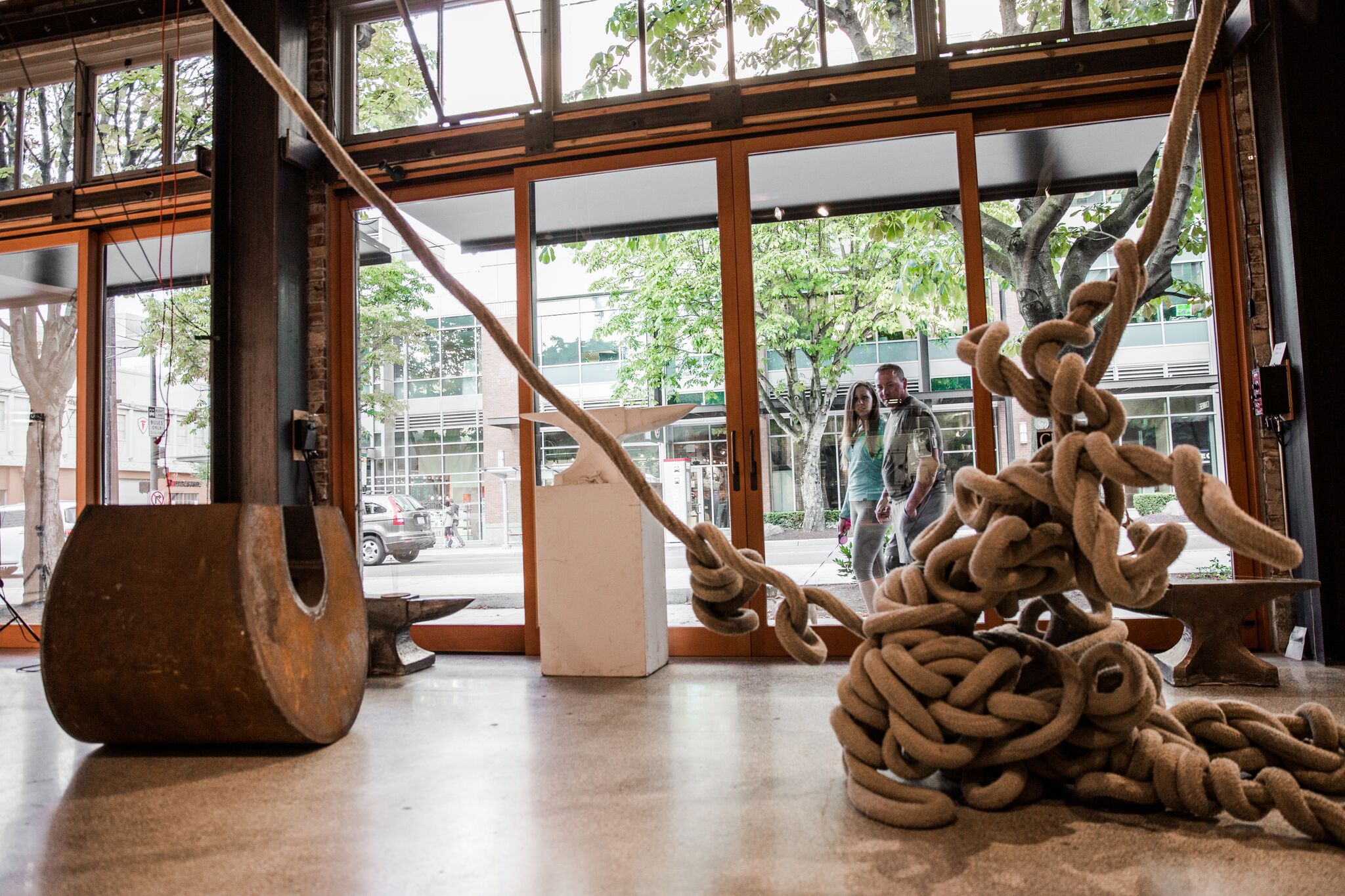 Echoing the snarled coils of rope, large knots of rubber inner tubes are scattered around the room. There are specially designed motors planted inside that leap to life, jittering and pulsing whenever data from the OneBusAway app signals a bus is passing by on Westlake Ave. Occasionally the artists open the wide sliding doors on the front of the building and place the sculptures on the sidewalks. When one of them is triggered, says Stubblefield, passersby jump, confounded and pointing. Then in a few seconds when it returns to rest, they rub their eyes, looking around for someone with a remote control who must be pulling a prank.

The playground extends on and on: A large-scale moire machine that is manually operated; touch it and light-porous panels swing into motion. The effect is like looking at the ripples of light filtering into a pool from above while floating underwater. An enormous, deflated latex weather balloon is suspended from a skylight nearby, the neck of which is connected to a hose that trails to the floor and plugs into a dusty shop-vac. At intervals, the vacuum feeds air to the balloon. Before it bursts, the air cuts off, allowing the balloon to relax like a giant lung. The inflation is triggered by info from NASA that signals each time an astronaut leaves or re-enters Earth’s atmosphere. 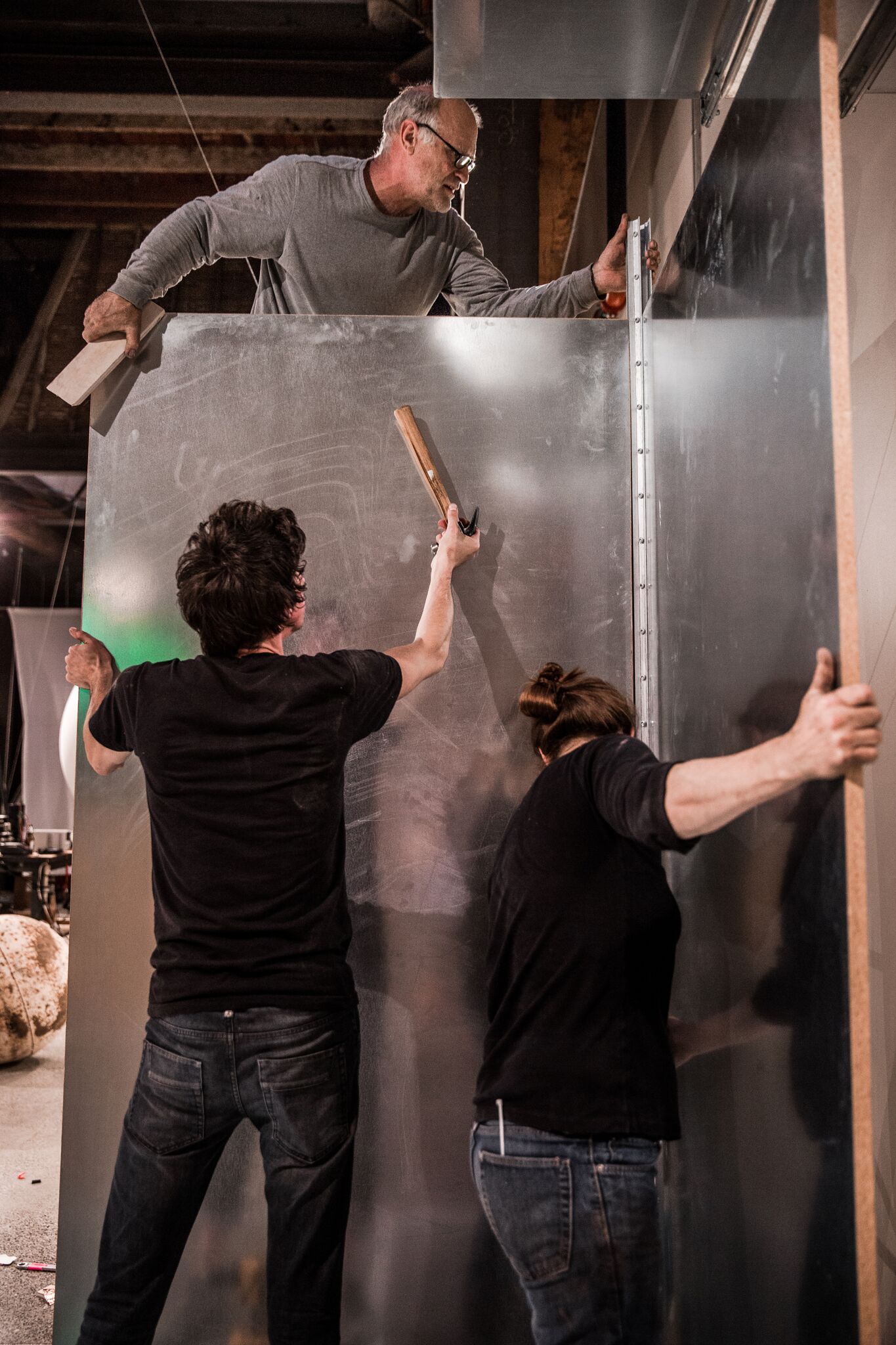 One piece still in the process of being polished comprises a foreboding chamber the size of a small room, constructed out of layers of steel sandwiched around particle board. Impermeable to electromagnetic waves (your phones won’t work there), the room was originally constructed by Nintendo for research purposes, then donated to UW. Vaguely resembling something out of a horror film, it has no handle to the door on the inside. During the reception, Stubblefield plans to pump in a heartbeat-like sound component generated by data scraped from Twitter. It’s a sort of sensory deprivation tank with the potential to overload the senses. The artists hope visitors will use it to have a more intimate experience with the art, especially during the harried receptions.

Unifying the pieces is the thrill of discovering connections—having fun while making sense of the flood of disparate, freewheeling data threatening to suffocate mind and spirit. These points of connection both literally and poetically ignite and propel each physical piece in the laboratory. A conflicting desire to tether and become untethered is iterated in the tension of the objects, in their swaying and tightening, rolling and swinging. But despite their fantasy-inducing properties, neither the depth of the sea nor breathless vacuum of space offer reprieve. Portfolio of Possibilities suggests the space between—the breathable atmosphere at home—is enough. If we harness the potential of chance here on the terrestrial plane, we’ll find all the magic we crave.