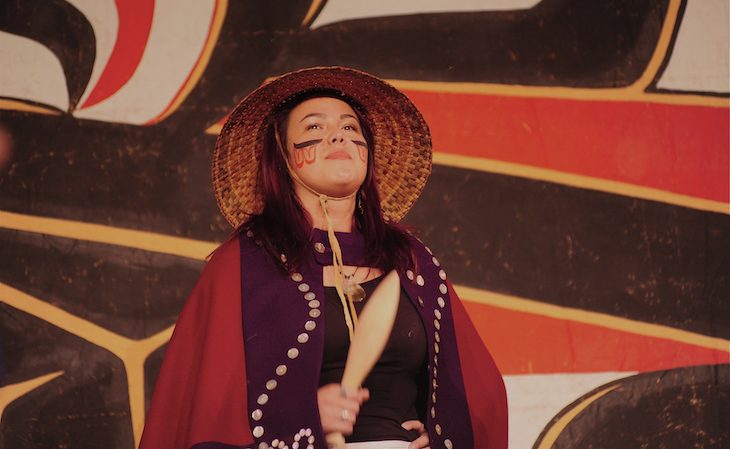 The silence lengthens. It almost reverberates from the shining halls of the Frye Art Museum on a gray November morning. I’ve just asked Juneau-based artist Alison Marks (Tlingit) why she decided to name her first solo museum exhibit One Gray Hair, opening here on Saturday. All she says is, “Hmm.”

Marks doesn’t like to talk about herself—in part because she’s a self-proclaimed introvert who’s “better on email,” but also because, she explains, talking about yourself is considered very impolite in Tlingit culture. “You’re raised to measure your words,” she says. “It was ingrained in me that you don’t make it about yourself.”

The artist, born and raised in Southeast Alaska, has plenty of reason to boast. She’s only 27 and already her work has been shown at the Bainbridge Island Museum of Art and Audain Gallery in Vancouver and has been added to the permanent collection of many prestigious institutions, including Portland Art Museum and the British Museum in London.

Talking about her art, she says, presents a contradiction she tries to work around. Likewise, in her digital prints, multimedia pieces and wall sculptures she negotiates the intricacies of being a “child of two cultures.” Marks’ exhibit at the Frye was in fact named after her discovery of her first gray hair—a marker of beauty in Tlingit culture, a virtual expiration date in Western society—and is curated by Miranda Belarde-Lewis, also Tlingit. The confluence of the artist’s two cultures is best exemplified by a series of digital prints: In them, the spaces between candy-colored iterations of traditional indigenous formline patterns of a wolf, bear, eagle, frog and owl are filled with their emoji counterparts.

“In my contemporary work,” she says, “I blend traditional Tlingit imagery and formlines with contemporary images, but it’s important to note that there’s also a another part of my art practice. I also make traditional art works for my community in Alaska to be used during potlatches and ceremonies.”

How does it feel to separate your work?
Natural, most of the time. The only conflict is that I need to market myself as an artist to make money and further the traditional side of my practice. I often feel uncomfortable posting pictures of those works, because when I give them to the clan, they don’t belong to me anymore. Which is why sometimes my social media will go dead for a while and it’ll look like I’m not making anything, while in truth I’m making massive paintings for the clan.

Besides preserving traditional art for ceremonial use, you’re also hoping to preserve the Tlingit language.
There are less then 100 Tlingit-speakers remaining in the entire world and all of the fluent speakers are over 50. Many younger people, like me and my parents, were brought up in English because they were punished for speaking it in school and other places—which is one of the reasons why Tlingit language is projected to be extinct by the year 2030. That’s terrifying. There are small pods of people who are learning it, but it hasn’t yet reached critical mass.

Is that why you’ve decided to learn it yourself?
It took me a long time to decide to learn it a few years ago. I needed to get over my internal barriers. I felt guilty that I didn’t know it, wasn’t born fluent. Maybe I didn’t feel “Native enough.” But then I realized that that’s an outside concept of measuring your “Indian-ness” and overcame my hesitation. The process has been so much fun. I’ve been able to get in touch with a whole worldview. On the flight to Seattle, I listened to a recording of my great-grandfather. I learned so much about him that I’ve otherwise wouldn’t have known.

Are you also trying to teach and actively preserve the language?
I’m trying to figure out how to use my position as an artist to do that. The Frye agreed to host a Tlingit language workshop, which I’m very excited for. I’m also in the early stages of creating a clothing line. I’ll donate a portion of the proceeds to Tlingit language revitalization. The clothing will blend traditional formline with modern imagery, a way for me to mix the traditional side of my practice with the contemporary.

That’s also visible in your paintings, which combine traditional formline with emojis and QR-codes. Why are you interested in it digital communication?
I’m thinking about how digital communication replaces traditional communication and Tlingit language. It also goes back to the idea that you’re not supposed to talk about yourself or be self-centered in Tlingit culture while there are so many young people taking selfies. The me-culture has somewhat taken over in what used to be a very collective and communal culture.

Does that sadden you?
It does. An elder said, “How many things do we have to change before we’re not Tlingit? How many things are we going to let go?” At the same time, we need to figure out a way to be Tlingit and exist in this world. That’s why I’ve included a large wall piece of formline wings in the exhibition. I’ve rendered them in a holographic, reflective sticker material as a nod to the world we live in. I’m hoping people will take pictures in front of it with the wings stretching out behind them and share it on social media.

Do you extend that invitation to non-Native people?
Yes. It’s not appropriation because it’s me as a Native artist making it and inviting visitors to participate. I’m mainly trying to normalize the use of formline, which is not usually seen as something you’d want to share, to bring it into contemporary culture. This work tries to find that balance between the two.

Have you found that balance personally?
I’m playing it by ear. Thanks to the James W. Ray Venture Project Award, I was able to carve a 10-foot totem pole and work on it in Yakutat. It’s a very isolated community of about 600 people—you have to boat or fly in—and there’s very limited Internet. While I was there for about a year, the elder taught me a lot about the language and the culture. My time there was a much-needed period of growth and intense learning. Now I’m back in Juneau, and still figuring out what it is, indigenous identity in the now. But my art helps me work through that.