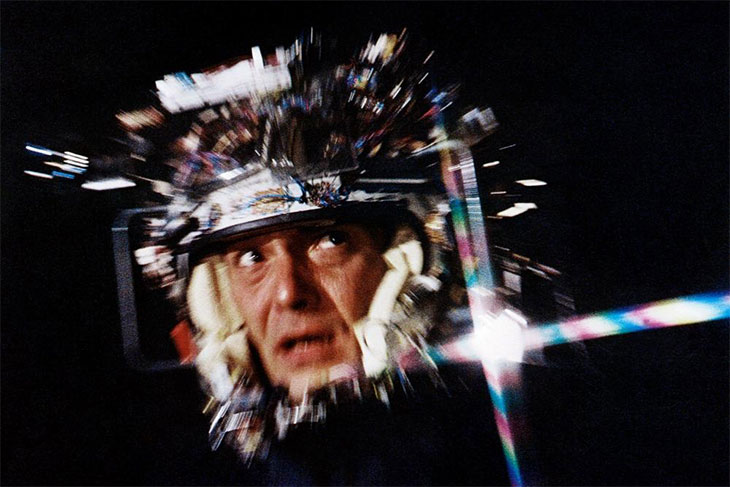 In the 1983 sci-fi movie Brainstorm, a team of brain scientists at the “Research for a Better Tomorrow” lab develops a headset that can record and play back thoughts, memories, emotions and sensations. Or as the trailer ominously puts it, can “transfer from one mind to another the experience of another person.” I first saw the film at a mall as a high school sophomore and it totally freaked me out.

Before everything goes awry—the military-industrial complex tries to take over the device; a management guy goes rogue and porns himself to near-death—Christopher Walken makes a tape as a gift for his estranged wife (Natalie Wood). “What is it?” she asks, as he hands her the reel. “It’s me,” he says. She dons the sleek headset and relives her husband’s memories of their best times together. But she’s not just viewing a tape, she’s feeling his feelings too. It’s pretty romantic.

A couple months ago, my husband Daniel and I swapped bodies. We did it via something that sounds straight out of a Ray Bradbury story: the Machine to Be Another, an open-source virtual reality device created by a team of artists, activists and technologists in Barcelona to foster greater empathy among humans.

To use the Machine, two people don Oculus headsets, each with an outward-facing camera mounted near the middle of the forehead, like a third eye. The camera projects what it’s capturing into the headsets, in real time, but the visual feeds are switched. So if a man and woman participate, the man looks down at himself and sees a woman’s body, and vice versa. A black curtain separates the pair, and assistants help ensure they are moving their limbs in unison, to achieve verisimilitude. The effect is getting dropped inside another person’s shoes, their clothing, their skin. Some VR evangelists believe social applications like these will not only increase generosity, but might even be crucial to our species’ evolution and survival.

When I first learned the Machine would be available to the public at the Twist360 immersive media festival this past October, I understood what a clever idea it was, but I wasn’t sure I wanted to be another. It’s pretty comfortable inside my mind/body bubble—I know where everything is and how all the limbs work. And I didn’t relish the thought of someone else being me, rummaging around in my private apparatus.

But with the love montage from Brainstorm in mind, I decided to try it with my husband. Unlike Walken’s, this device doesn’t facilitate sharing memories or emotions, but when I put it on and looked down at my arms, they were Daniel’s arms. My thighs, his thighs.

I started giggling. Suddenly my body existed on a larger scale, with wider hands, bigger feet. It was a little like putting on a mascot costume—something that felt outsized and cumbersome. When I looked at “myself” (and saw Daniel) in the mirror, wearing his favorite shirt, I was startled. It was pretty freaky to be on the inside of the body I lay next to every night. Then it hit me how similar we are—same age, same skin color, same bank account—and how powerful it would be to body swap with an amputee, a Kenyan, a kid.

A couple days later, I went to another demonstration of the Machine to Be Another—this time with a diverse class of 8th grade girls at Lake Washington Girls Middle School. The girls grasped its empathy potential immediately. “Who might be interesting to partner with?” the facilitator asked them. The girls didn’t hesitate: someone of another race, someone with a disability, an animal, a boy, Beyoncé.

Paired up and headsets on, the girls oohed and OMG-ed and even seemed compelled to embrace afterward, hugging each other with big smiles and breathlessly comparing notes. It was incredibly moving, and the best kind of “research for a better tomorrow.” I felt an old teenage feeling spreading across my chest—a longing to hang around girls who seemed to hold all kinds of secret truths.

Empathy is described as opening your heart, but it’s a feeling generated in the brain. Neuroscientists have learned that it’s not a fixed trait or ability; it’s a skill that can be expanded, with practice. It’s right there inside of us—even when we don’t use it.

The most powerful moment of the Machine to Be Another—for me, the girls and, apparently, most people—comes when the facilitators remove the barrier between two partners, and you see yourself from the outside. You approach yourself from within another person’s body. The feed is low-res, so it’s a little hazy—your body looks fuzzy around the edges, like an aura.

For me, it felt like pulling back the curtain on the great and powerful Oz making a lot of ruckus inside my head. I looked so exposed and small! I was instantly reminded of the hermit crabs my sister used to keep as pets when we were young. The poor things were unsettled in suburbia; sometimes they abandoned their shells. With abdomens unsheathed they were hugely disconcerting, like something out of science fiction. But they were just shedding their exoskeletons, in search of a more forgiving fit.

I’ve considered a kinder view of myself since my experience with the Machine—like an introduction to a new way of thinking, a reintroduction to me. Something about seeing yourself from outside your own bubble allows you pierce it, and peer deeper inside, as if you’ve gained second sight. I even had my own brainstorm: The beauty of the Machine to Be Another isn’t just the ability to be an other for a few minutes, but to become another. To evolve into a new you.

Return to the complete December collection of art and writing