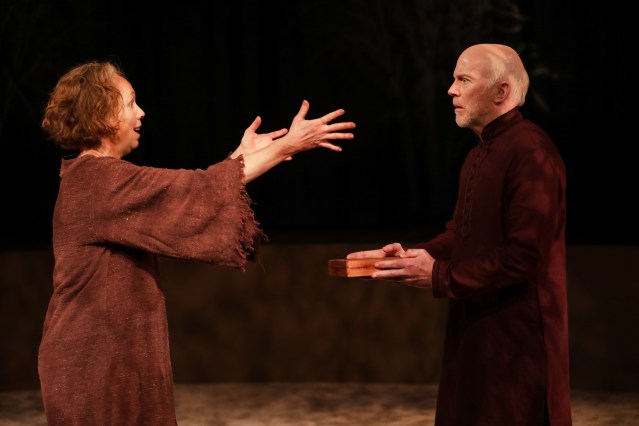 Ask anyone to name three (or five, or even 10) Shakespeare plays and chances are Timon of Athens won’t be on the list. One of Shakespeare’s rarely produced plays, Timon of Athens, thought to be a collaborative effort with fellow English playwright Thomas Middleton, delves into ideas of class division, distribution of wealth, justice and misanthropy. Given today’s tumultuous social and political climate, it’s difficult to approach art without attempting to draw parallels between the work and the zeitgeist—and certainly, this play contains many. But in a solid new production at Seattle Shakespeare Company the show’s many elements, including set, casting and costumes, meld in a way that puts focus squarely on a deep exploration of human nature.

Timon, played by laudable local theatre veteran Mary Ewald, is a wealthy and beloved Athenian gentleman who spends his fortune lavishly on those around him. (Parties! Gifts! Dinners! Bail bonds!) While he views the men he bankrolls as true friends, they’re actually corrupt hangers-on whose sycophantic behavior he mistakes for loyalty. When Timon’s fortune finally runs out and the creditors come calling, he turns to his “friends” for help, but they leave him desperate and alone. Fleeing to the wilderness, Timon finds shelter in a cave and denounces humanity, embracing the lifestyle of Apemantus (Michael Winters), an ascetic philosopher he once mocked.

The play unfolds under the direction of John Kazanjian (co-founder, with Ewald, of Seattle’s venerable and ambitious New City Theater), with the second, more emotionally intense act artistically eclipsing the first. Ewald’s performance is strong throughout the entire play, but it isn’t until her character is completely broken and stripped of every worldly comfort that a truly nuanced Timon emerges. Ewald falls to the ground, gnashes her teeth, grabs at her hair—a series of physical manifestations of the pain and grief of abandonment. Playing a haughty spendthrift who loves to party comes with some wiggle room for cheesiness; portraying the descent into complete desperation and loss of all human empathy in a believable, empathetic way takes incredible skill—Ewald absolutely nails it. The rest of the cast brings a tight-knit performance, with Winters and Peter Crook (playing Timon’s servant Flavius) taking strong command of their characters.

The minimal set (Shawn Ketchum Johnson) and costumes (Jocelyne Fowler) don’t assign the play a specific time period, which is at first slightly irksome, but actually does a service to the text by allowing complete focus on the acting. A large semi-circular beige rug sits underfoot of the actors, while far upstage sits a brown platform with stairs on either side and at the center, allowing actors to work at different levels and subtly reinforcing social class divides. Costumes consist of neutral tunics, scarves, vests and cloaks, once again embracing the universality of the play’s themes.

While not the flashiest of plays, Timon of Athens has an unexpected ending (at least in my book) that gives it a jolt of life. Rather than having his main character learn from his mistakes, Shakespeare gives us a conclusion that makes us question Timon’s decisions and ponder age-old questions about human nature. Four hundred years later and we’re no closer to agreeing whether humans are inherently good or evil, but Timon of Athens is a reminder that not every story has a happy ending.