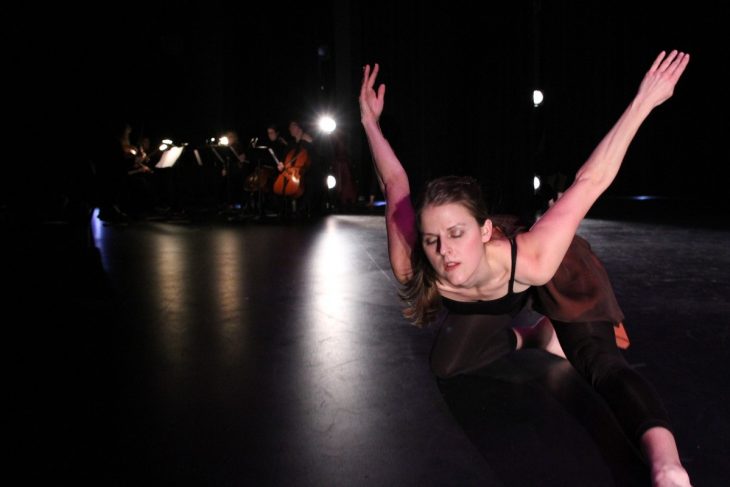 The subject matter is a heavy load to carry in a first-time collaboration, but the two groups seemed destined to work together because their mission statements were so aligned, Chin says. “When I launched this concert series I wanted a dance partner to create music for, and everything that [Karin Stevens] and I do is socially conscious in a tangible way for our audiences.” Housed under the nonprofit Common Tone Arts organization, the Universal Language Project creates work by and with independent artists in an age of lacking public funds for the arts, and Stevens’ work often focuses on emotional aspects of current events and the problems they cause in modern society.

“The Greater Trumps” is a retelling of “The Soldier’s Tale,” a theatrical production about a soldier who sells his violin in exchange for power and wealth but eventually loses his good luck along with his home, his bride and his future. Created in 1918 by composer Igor Stravinsky and Swiss writer C.F. Ramuz, “The Soldier’s Tale” premiered in Lausanne, Switzerland, near the end of World War I, which had robbed Europe of much of its culture and infrastructure, along with millions of lives. Stravinsky and Ramuz wrote “The Soldier’s Tale,” based on a Russian folktale, and performed it on a portable stage with three actor/dancers and seven musicians. The Faustian story has been reimagined many times over the last century by artists such as Frank Zappa, New York City Ballet and a 1955 Stratford Shakespeare Festival production starring Marcel Marceau as the Devil.

“The Greater Trumps” uses Stravinsky’s score and a new spin on the story written by librettist Doug Thorpe, professor of English at Seattle Pacific University. To create a story that audiences could identify with, Stevens, Chin and Thorpe changed the Soldier into a character called “The Woman,” ditched the princess storyline in which the soldier must redeem himself to rescue his beloved bride, and wove in references to T.S. Eliot, the Beach Boys and the Tarot.

“We wanted to deal with the last 100 years and the geopolitical and environmental issues that have brought us all to this place [in history],” Stevens says.

The new story follows The Woman, played by Stevens, a banker who sells her soul to the devil for a book that provides her with protection from the pending apocalypse. While the other characters flee their burning city, The Woman must decide if her knowledge about the end of the world is worth her power to live through it. Instead of rescuing a princess, The Woman in The Greater Trumps is tasked with rescuing her own humanity. A three-person cast dances this dramatic story while seven musicians stationed on raised wooden platforms on three sides of the stage perform Stravinsky’s score.

The story of “Saci, a Brazilian Folktale” centers around A Brazilian folk character who embodies three cultural roots of Brazilian culture: Native peoples, African slaves and Portuguese colonizers. The music for “Saci” was composed by Latin Grammy nominee and Cornish College of the Arts instructor Jovino Santos-Neto, using the same instrumentation as “The Soldier’s Tale.” Seven musicians—trumpet, violin, clarinet, bassoon, trombone, upright bass and percussion—perform onstage with three dancers who each represent one cultural aspect of the Saci character.

Stevens, who spoke at length with Santos-Neto about growing up with the Saci character, explains that the character is traditionally a one-legged male trickster whose three cultural representations are illustrated by a distinct prop: a pipe for African roots, a red cap for Portuguese influence and “hair on fire” for the indigenous influence. Stevens cast two men and one woman (Morgan Houghton, Warren Woo and Anja Kellner-Rogers) as the three Sacis, and each dancer will represent their character through the use of props and a black stocking to mark the absence of a leg.

This made developing choreography for the Saci piece a fascinating experience, Stevens says. “I took ideas from conversations with Jovino and a Brazilian colleague of my husband and filtered them into a collaborative exploration with my dancers. We asked ourselves how would a one-legged boy move and how would he feel about his trickster powers?”

Though the distinct pieces are separated by an intermission, Saci & The Greater Trumps are designed to be viewed together, Stevens says. The Saci stories often depict similar Faustian themes of trading power for the soul—in Brazilian folklore the Saci gives his hat to an antagonist who puts it on, is granted three wishes, and then returns the hat and goes on his way to enjoy the fruits of his wishes but is forever followed by the smell of sulfur.

But how will these two distinct ballets impart messages of social change to its audience? Through the movement itself, Stevens says .

“Movement is a way of life and [in “The Greater Trumps”], The Woman has to decide between love and movement or power and control. It was interesting to create these pieces in the midst of the fires happening on the West Coast because the imagery of fire and the material and cultural destruction that they cause is used to portray the downfall of society [in The Greater Trumps]. Hopefully “The Greater Trumps” will effect a change in people who see it.”

See Saci & The Greater Trumps Dec. 1–2 at the Cornish Playhouse