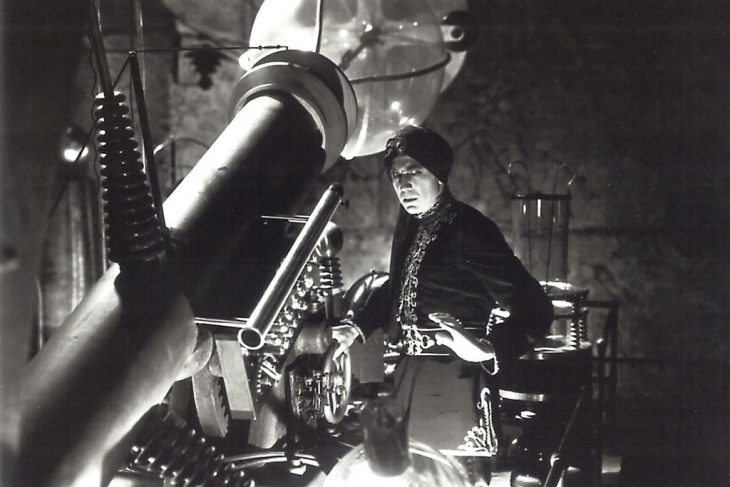 There’s much enchantment in the flickering images of early 20th-century fantastic cinema.

Decades before cinematic illusions could be wrought with a few mouse clicks and keyboard taps, pioneering filmmakers crafted strange worlds, space ships and robots with a few venerable optical tricks and a lot of imagination. Viewing those early efforts through jaded 21st-century eyes, it’s easy to dismiss them as pure hokum. But seeing a parade of those antiquated images—boxy robots portrayed by men in suits, gorgeously-rendered art deco spacecraft zipping across back-projected skylines, exotic women with features obviously sculpted in decades past—can’t help but captivate in the right context.

Seattle-based director Erik Hammen knows this, and he’s created a film, Time of the Robots, steeped deeply in that mystique. Hammen sifted through several hundred hours of public domain footage, weaving images from old cliffhanger serials and silent films into a rip-roaring narrative involving the appearance of a mysterious phantom planet and the attempts of its tyrannical emperor to overtake the Earth with rebellious automatons.

What stoked Hammen to create an original feature film from pieces of old ones? Part of the motivation, he explains, came from sheer love. “I was always trying to explain to my friends why Flash Gordon, King of the Rocket Men and Zombies of the Stratosphere were so great,” he says.

“It purports to be a documentary on Frank Sinatra’s connection to the Mafia,” Hammen says. “The movie uses clips of Frank Sinatra’s films to pretend it was this documentary. I couldn’t go to New York to watch it, but it was such an exciting idea. Then I took a look at the serials, and thought, I’m gonna make myself a little Peepshow of my own. It’s gonna be a science-fiction, silent Peepshow.”

Hammen worked on Time of the Robots over a five-year period while juggling full-time employment in the dotcom world and full-time duties as the father of two children. The film is essentially a one-man effort, with Hammen writing the script and taking on the mammoth task of editing the footage into a cohesive, unique whole. “It was so hard,” he says. “The footage would not do what I wanted it to do sometimes, and it was really important to me to make it work.”

Much of the film’s score is comprised of public domain music from the Edison Library, but Hammen ended up using sound effects and self-composed music to fill in the gaps. “The public domain music was too limiting at times,” he says. “I was so excited to do my own soundtrack. It was a ton of work, but so much fun.” He enthuses about punctuating one of the movie’s big action scenes (lifted from the old King of the Rocket Men serial) with his own music: “When the Rocket Man’s gonna take off, I thought, man, this guy needs a kettle drum!”

For all its pulp-cinema spirit, Time of the Robots also sports some cogent socio-political commentary. George W. Bush was still in office when Hammen began the project, and he admits that some of that awareness seeped into the finished product. “[Bush] was trying to privatize health care,” he says, “and I thought, we’re gonna give away civil society to a little group of people, and that’s the plan? It just felt so good to make a film that addressed that.” But Hammen feels strongly that he never lost sight of the film’s core of old-fashioned entertainment. “Within the structure, it’s total pulp,” he adds.

Hammen’s film career covers a wide swath: His first feature, the 2000 indie comedy Love My Guts, received kudos from experimental filmmaker Stan Brakhage, and his 2011 short The Last City in the East features poet Paul Dickinson on a semi-fictionalized visit to Minnesota. Next summer, the director begins filming “a beach movie. “I’m shooting it here in Seattle,” he says with a laugh, “so it’s a beach movie of the mind!”

Time of the Robots screens Saturday Sept. 29 at the Grand Illusion theater.